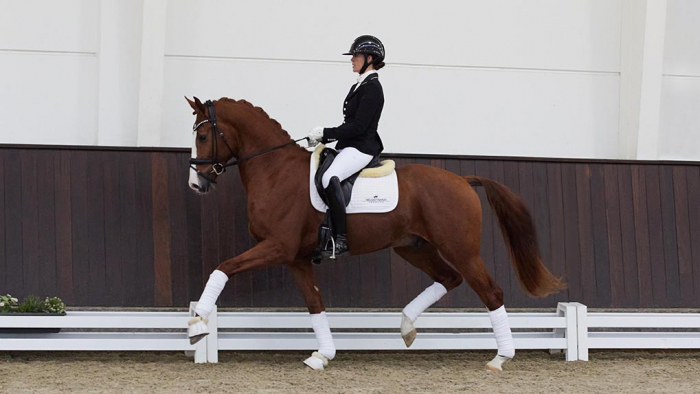 A stallion with a fantastic temperament: He always wants to do everything right - and he does everything right. All three paces are at the highest level, loose, ground-covering and very well balanced with a lot of regularity. The stallion knows what he can do and also knows what he is doing," said licensing commissioner Heike Kemmer, praising our Hanoverian premium stallion Zoom In in the highest terms.

The sire Zoom was Reserve Champion of the Westphalian licensing in 2016 and a little later Premium Stallion of the Hanoverian Young Stallion Licensing. He completed his 14-day test in 2017 in Neustadt/D. with a final score of 8.88 as Reserve Champion and won his sport test in Münster-Handorf (8.51) as a four-year-old in 2018. At the age of five, he completed his stallion tests with high scores and qualified for the German Championship for young dressage horses. Ridden by his trainer Helen Langehanenberg, he was selected for the World Championships for six-year-old dressage horses in 2020, which, however, could not take place due to the coronavirus pandemic. Zoom produced the Champion Colt of the German Foal Championships in 2018. One of his daughters was placed sixth in the fillies class. In his first crop of colts up for licensing, nine stallions were approved, including two other premium stallions in Westphalia.

His grand-sire is the Hanoverian licensing and stallion performance test Champion, Waterford, who was successful at intermediate (M) level in dressage and who stood at the Celle State Stud in Lower Saxony. He produced five licensed stallions. The Grand Prix horse Wonder/Nicole Vazquez Kremer/ESP stood out amongst his offspring who competed.

His grand-dam Leandra produced the Grand Prix horse Deleandra B (by Del Piero).

His great-grand dam St.Pr.St. Eljana produced the advanced (S) level dressage horse Wejas (by World Cup I). Eljana is also the half-sister of the stallion Jaccar (by Jet Stream xx), who is licensed in Austria, and appears as great-grand-dam in the pedigree of our show jumping stallion Van Helsing (by Valentino).

The stallions Red Diamond Fox (by Real Diamond), Don Bolero (by Davignon I), Fisherman (by Forrest xx), Dueker (by Duden II), Nurprimus (by Pinturischio xx), Gruss (by Gmunden) and Gurt (by Gmunden) also descend from the dam line of Nordpitze. Escada FRH (by Embassy)/Ingrid Klimke, Le Mans (by Leubus)/Meredith Michaels-Beerbaum and the Olympic Champion Wansuela Suerte (by Warkant)/Hubertus Schmidt stand out amongst the sport horses.

Zoom In is stationed at Helgstrand Dressage Denmark