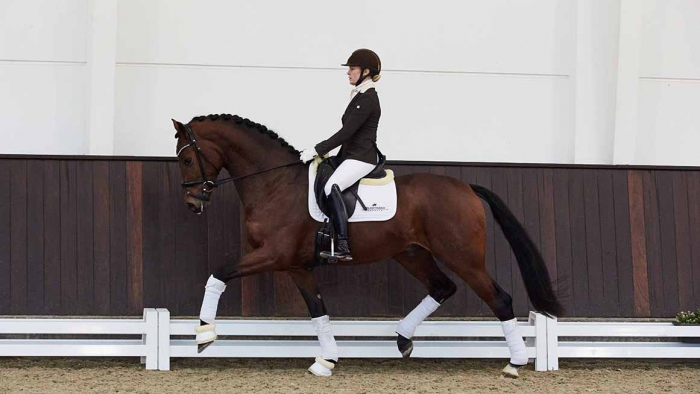 An absolutely magnificent stallion, very light-footed and yet extremely powerful - that is Zico. With a true affinity for performance - also regarding his genetics.

His Danish sire Zackerey descends from one of the strongest performing dam lines in Denmark. In 2016, he was licensed in Oldenburg, then received the gold medal at the Danish licensing and came second in the Danish four-year-old Championship with a score of 9.46. Thanks to his numerous champion foals and auction foals, he was proclaimed Oldenburg Ia main premium winner. With Zico, he produced his first licensed son.

His dam Maxima is the half-sister of the licensed stallion Beniro (by Bretton Woods).

The Swedish-bred dam's sire Tomahawk was the stallion market sensation of his 2011 licensing in Oldenburg with a knockdown price of 800,000 Euros. He was second Reserve Champion of his stallion performance test. In 2013, he was awarded the Ib main premium in Vechta. He has produced three licensed stallions, including the champion of the Oldenburg Saddle Licensing in 2017, T-Hawk Axe (alias Texas Tokio). His daughter St.Pr.St. Tara OLD reached the “Brillantring” at the Oldenburg Elite Mare Show, was one of the auction top prices in Vechta and was placed eighth at the German Championships for five-year-old dressage horses. Tom Jones KR was also successful in Warendorf.

De Niro, successful at Grand Prix level at the age of eight and winner of the Dressage Derby in Hamburg with riding master Dolf-Dietram Keller, also appears in the pedigree. He led the WBFSH ranking list of the best dressage sires worldwide for six years and is currently in tenth place. In 2008, he was named Hanoverian stallion of the year.

Zico is stationed at Helgstrand Germany