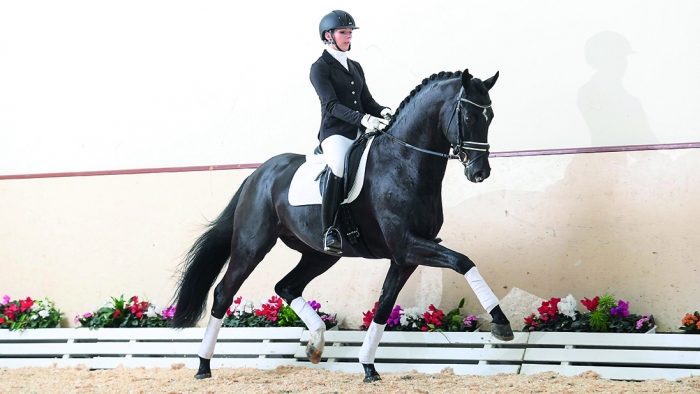 Zenon produced an exceptional first crop of foals in 2018 and is now, once again, on everyone‘s lips with his exceptionally strong-moving offspring. In 2017, he came third at his stallion performance test in Adelheidsdorf with high individual marks and 8 .66 overall . His sire Glock’s Zonik N. O. P. recently won team silver with Edward Gal/NED at the European Championships in Rotterdam/NED and took eighth and sixth place in the Special and Freestyle.

Previously, he also came eighth in the World Cup Final in Gothenburg/SWE and was the best horse of the Dutch team at the World Equestrian Games in Tryon/USA in 2018, finishing seventh. With Zucchero Gold (sport name Zucchero OLD), he sired the current World Champion of young dressage horses and last year‘s German Champion.

In 2019, Zum Glück RS2 OLD won the title in Warendorf. Among his twelve sons licensed in Germany is MDM Zodiac OLD, winner of the Oldenburg saddle licensing, regional champion and third at the German Championships. His dam sire Don Schufro, who appears twice in Zenon’s pedigree, won Olympic Team Bronze with Andreas Helgstrand in Hong Kong/HKG. He has made a lasting impression on dressage horse breeding.

His offspring are led by the Olympic and World Cup winner and European Champion Weihegold OLD/ Isabell Werth. His grand-dam L’Actrice is the full sister of the licensed stallion L’Acteur, who was successful up to Inter I. The Holstein Verband stallion Lorentin I, in the third generation, was placed in the Grand Prix arenas of Rotterdam/NED, Saumur/FRA, Hamburg/ GER, Oslo/NOR and Braunschweig/GER with Wolfgang Schade. Among his licensed sons, the Holstein licensing winner Lusello stands out. Loverboy, one of the 40 descendants of Lorentin that were successful at high level, was part of the German dressage team, after victories in Aachen/GER, Salzburg/AUT, Mannheim/GER and Fritzens/AUT with Jenny Lang-Nobbe.

Through the stallions Raimondo and Roman, who appear in the previous generations, the legendary refiner and line founder Ramzes AA also appears in Zenon’s pedigree. Zenon is out of the Holstein line 4025.

Zenon: a touch of uniqueness