The reserve winner in Westphalia

"Equipped with a lot of esprit and spirit. In the movements of all first quality: power, impression, motor, incredibly much shoulder freedom. Statuesque appearance, good muscling, wide maturity - an absolute eye-catcher," Westphalia's Breeding Director Thomas Münch was absolutely taken with Vogue in his comments at the 2021 licensing in Münster-Handorf. Vogue was the darling of the audience and was carried by their applause on his lap of honor as the newly selected Reserve Champion.

His sire Vitalis was stallion foal winner in the Netherlands in 2007, reserve winner of the NRW licensing in 2009, HLP dressage index winner in 2010, placed at the World Dressage Horse Championships and the Pavo Cup Final in 2012, champion in the USA in 2013 and qualified for the World Dressage Horse Championships again with a record score, and won the international Small Tour at the first attempt as a seven-year-old in 2014. Back in Germany in 2016, Vitalis won the Burg Cup Final in Frankfurt and the Stallion of the Year competition at Intermediate I level at the World Championships in Ermelo/NED. Soon 70 of his sons were licensed, among them our Bundeschampion and Hanoverian Champion Vitalos. The first offspring are successful in Grand Prix, like the Louisdor Prize Final runner-up Valencia AS and the Aachen winner and Otto-Lörke Prize winner Valesco/both ridden by Fabienne Müller-Lütkemeier, the Compiègne winner Vamos Amigos/Cathrine Dufour/DEN and the German U25 Champion Vinay NRW/Ellen Richter.

The dam, St.Pr.St. Fräulein W, already produced Valdividan W (by Veneno), who was successful in tests for young dressage horses.

The dam's sire, Fidertanz, was NRW licensing winner in 2004, Vice Bundeschampion at the age of three, HLP winner, Bundeschampionat qualifier and then went successfully up to Grand Prix. In 2021 he was named Hanoverian Stallion of the Year. He is currently seventh in the WBFSH ranking of the world's best dressage sires.Around 60 licensed sons are listed, including the Grand Prix winners Foundation/Matthias Alexander Rath, Tannenhof's Fahrenheit/Anja Plönzke and Franziskus/Ingrid Klimke. His offspring are quite versatile, as evidenced by Finest Fellow, who is up to CCIO4* with Elena Otto-Erley, and Fairytale, who carried Anna Lena Schaaf to the European Vice Champion title in Malmö/SWE.

In the pedigree follows the current number one among the best dressage sires worldwide, our main sire Sandro Hit.In fourth place comes Monte Carlo I, who sired, among others, the World Cup Final sixth under Hubertus Schmidt, CHIO Aachen Freestyle winner and DM runner-up My Fair Lady NRW.

The great-granddam, St.Pr.St. Monterey, is also the dam of the advanced (S) level dressage horse Sweet Diamond (by Sandro Hit) and the mare Right on Time W (by Rosario). The latter produced the licensed stallion Bel-Air (by Belissimo M). 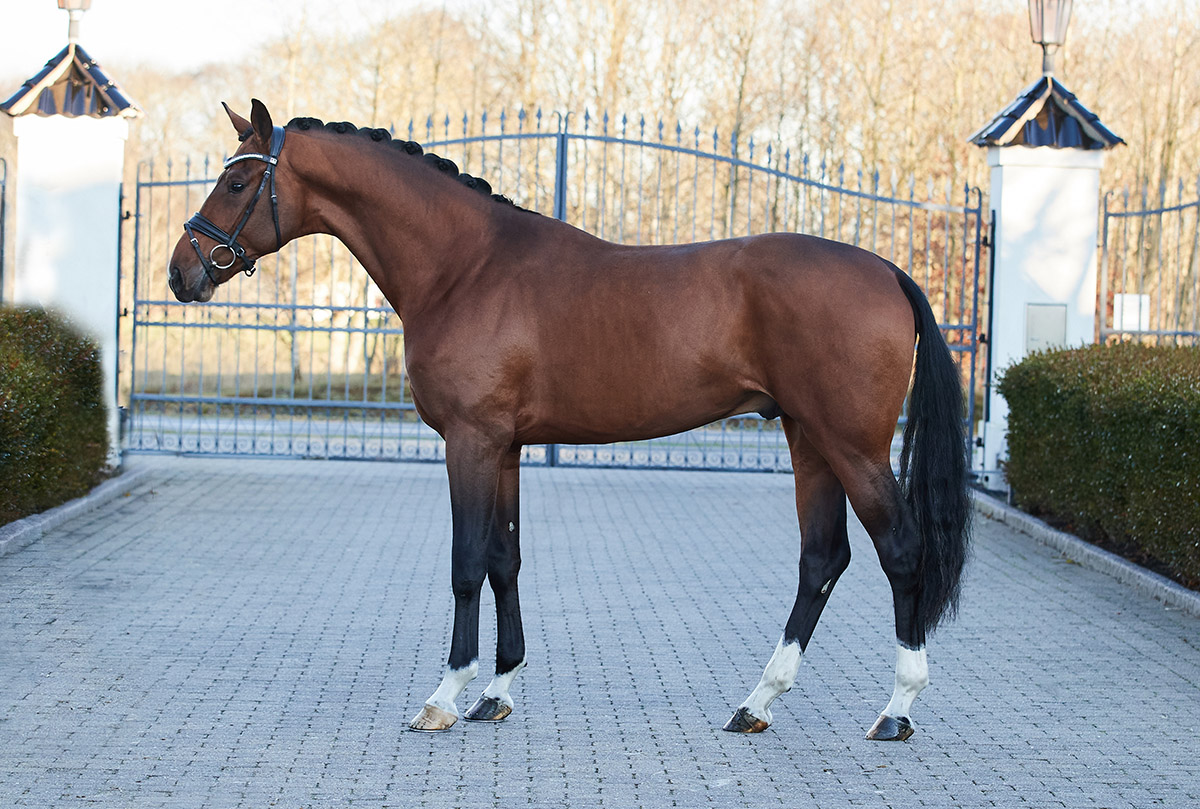