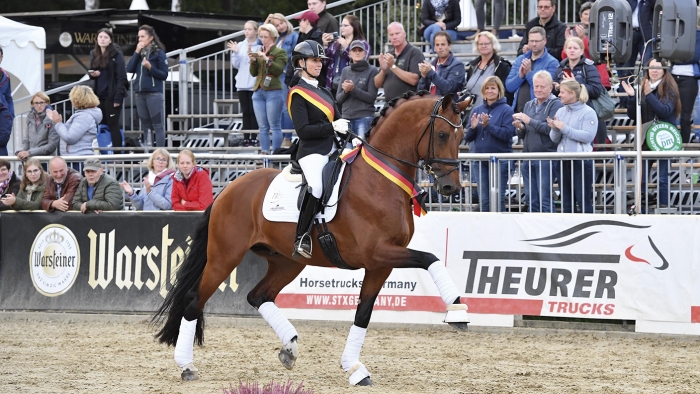 Valverde NRW added to his collection of titles last year with his third triumph at the Westphalian Championships. With his trainer Eva Möller, he received a 9.0 for each of his three gaits and the overall impression! At the German Championships, he convincingly won the qualifier for the final (9.0) and also received high individual scores in the final: for the "super energetic trot, which is incredibly powerful, dynamic and uphill" and for the walk "with fantastic rhythm and stretch" each a 9.0. Commentator Dr. Dietrich Plewa also praised Valverde's "canter with three clear beats and flying changes with a clear jump through the body and a lot of expression" and attested to Valverde's "outstanding talent". He finished fourth with an overall score of 8.5 against very strong competition. He was then selected to represent Germany at the World Championships for young dressage horses, however, this championship could not take place due to the coronavirus pandemic.

His sire Vitalis was Champion Foal in the Netherlands in 2007, Reserve Champion of the NRW licensing in 2009, winner of the dressage index of his stallion performance test in 2010, placed at the World Championships and Pavo Cup final in 2012, Champion in the USA and again qualified for the World Championships with a record number of points in 2013 and victorious in the International Small Tour at only seven years old in 2014. He came back to Germany and, in 2016, ridden by Isabel Freese, he won the Burg Cup Final in Frankfurt and the "Stallion of the year" competition at Inter I level at the World Championships in Ermelo/NED.

His dam St.Pr.St. Amicella was successful up to Inter I.

His dam's sire Ampère, KWPN Champion Stallion and champion of his stallion performance test, has produced over 60 stallions approved for breeding in the Netherlands and in Germany, including the Grand Prix winner Abegglen FH NRW/Victoria Max-Theurer/AUT, the Louisdor Prize finalist Aperol/Emma Kanerva/FIN, First Ampère, who came sixth at the World Championships for young dressage horses and our KWPN Champion Stallion, Franklin. He has produced over 50 state premium mares, including the Westphalian Champion Mare Anky. Numerous auction top prices have also been recorded.

His grand-dam St.Pr.St. First Fina is the half-sister of Enrico (by Ehrentusch), who was successful in Grand Prix, and of further successful dressage horses. She produced the licensed stallion Mister Diamond (by Sir Donnerhall I).

First Final, Reserve Champion of the Oldenburg licensing in 2005, who appears in the third generation, combines the dressage World Champion Fürst Heinrich and the legendary stallion Argentinus in his pedigree. He was successful up to advanced (S) level.

The half-blood stallion Laomedon, Delphi, who was successful in Grand Prix, and Der Clou, who won his stallion performance test, complete his pedigree in the most excellent way. 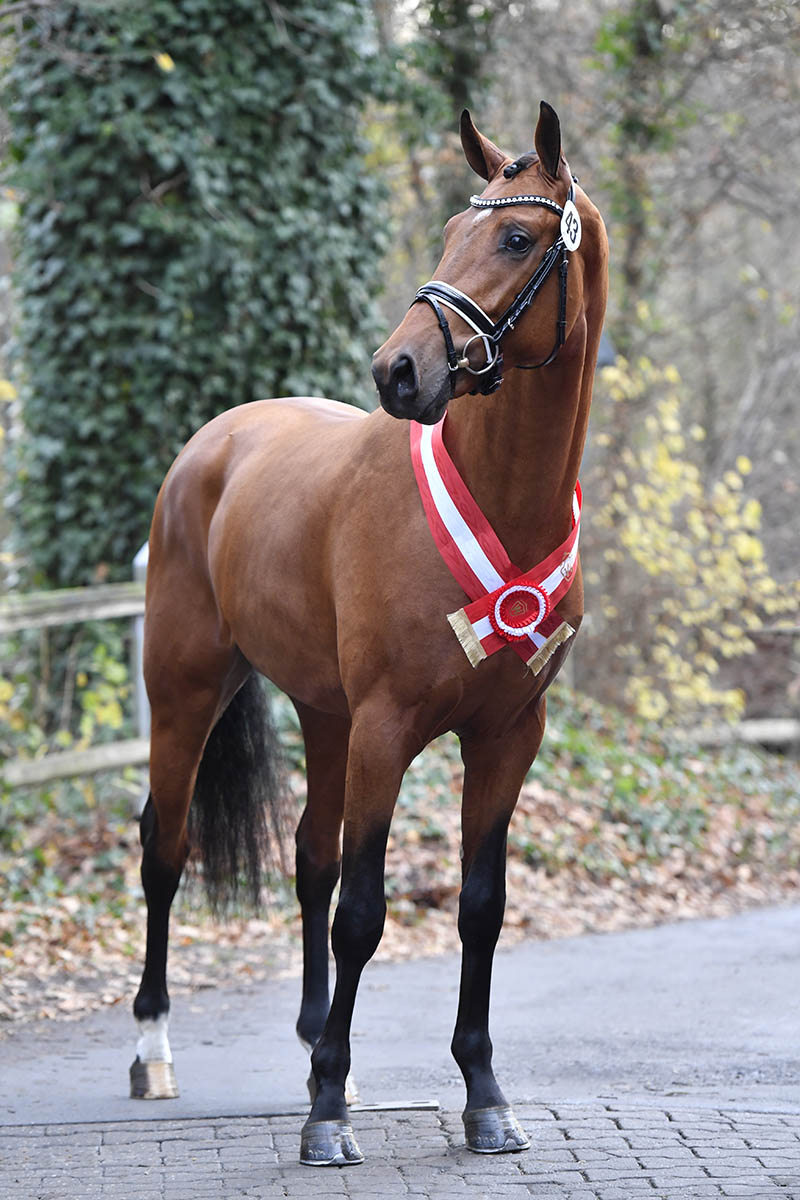