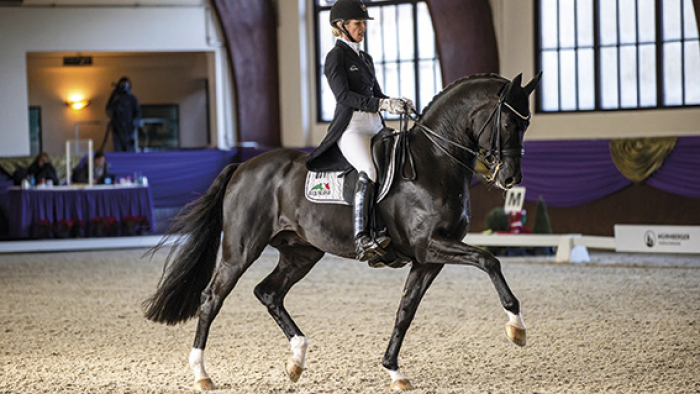 "A very, very pleasant presentation and a stallion with great potential. He is on the right path and his rider presented him extremely well," Christoph Hess praised the performance of Top Gear OLD in the strong final of the Nuremberg Burg Cup in 2020. Ridden by his trainer Isabel Freese/NOR, the jet-black noble stallion received an impressive 75.293 percent and finished in an excellent fourth place, just 20 points behind the winner.

Top Gear OLD qualified for this prestigious competition of Germany's best young dressage horses with over 77 percent. Previously, he recorded results of over 80 percent for his international debut, for example at the Wiesbaden Young Horse advanced (S) level dressage competition.

In 2014, Top Gear started his career as Reserve Champion of the Oldenburg licensing and finished in the top group of stallions at his 30-day test in 2015 in Schlieckau (score: 8.78). He received 10 for his character and 9.75 from the test rider. He then qualified for the German Championships. In 2018, he continued his winning streak at intermediate (M) level dressage competitions.

Top Gear OLD's first offspring are very promising in young horse competitions, such as Takeo, who has won several young dressage horse competitions. Top Gear has produced several licensed stallions. One of his colts, Top Secret, was sold for 17,000 Euros, one of the top prices of the Elite Auction in Vechta.

His sire Totilas won double gold at the European Championships in Windsor/GBR in 2009 and triple gold at the World Equestrian Games in Lexington/USA in 2010. Furthermore, he was unbeatable at the World Cup Final in 2010 in 's-Hertogenbosch/NED and achieved numerous world record scores. He has produced almost 30 licensed stallions, such as Total Hope OLD, Champion of his licensing, Swedish Champion, placed third at the World Championships for young dressage horses, Burg Cup winner and victorious at Grand Prix level at the age of eight, the double silver medallist at the World Championships, Governor-STR/Adelinde Cornelissen/NED and the Baden-Württemberg Champion and Inter II winner Birkhof's Topas FBW/Nicole Casper.

His younger full brother Cartoon is victorious at intermediate (M) level and his half-sister Zolla (by Zonik) has won advanced level dressage competitions.

Dam sire Don Frederico was champion of the Hanoverian licensing, finalist at the German Championships and won advanced (S) level dressage competitions. In 2009, he was awarded the ‘Grande-Preis” and in 2012, he was named “Hanoverian Stallion of the Year”.

Grand-dam Saniza produced three licensed stallions: Rosandro (by Rosario), Royalist (by Royal Hit) and Be Smart (by Bordeaux). Rosandro was victorious in dressage up to Inter II. With a total of 9.1, he won the qualifier for the final at the German Championships (5 y.o.) in 2009 and won the silver medal in the final with an overall score of 8.8. In 2010, he took the fourth place in the final of the German Championships (6 y.o.). Rosandro already excelled with numerous victories in young horse classes as well as a third place in his 30-day test in 2007 in Schlieckau. Be Smart competes in the international Small Tour for the Netherlands.

His great-grand-sire Sandro Hit, World Champion and German Champion, very quickly made a name for himself as a foundation stallion in dressage horse breeding.

In the fourth generation is the eventing sire Espri, whose offspring include the Olympic Team Champion and World Champion Elvis VA/Nadine Capellmann and the winner of the show jumping World Cups in 1996 in Geneva/SUI and in 1997 in Gothenburg/SWE, E.T. FRH/Hugo Simon/AUT.