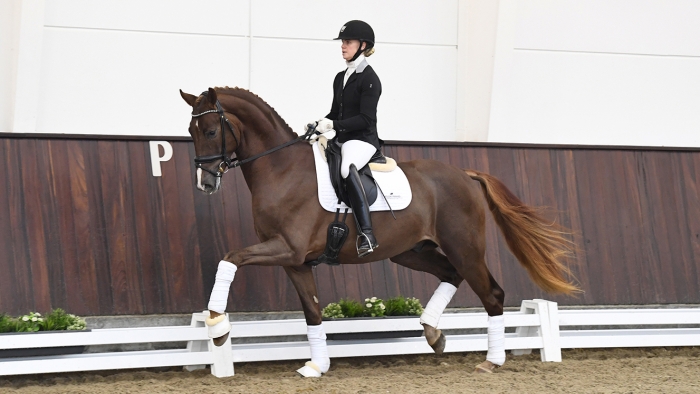 With optimal paces, Sir Floresco trotted straight through to the premium lot at his licensing in Münster-Handorf. He almost perfectly embodies the modern dressage horse and inspires with his inner calmness.

The NRW State Stud Stallion Sir Heinrich OLD has long been regarded as a top-class sire and has had a particularly strong influence on Westphalian breeding. He himself descends from one of the most successful Oldenburg dam lines, the Cinderella line, that was bred at the Wendeln Stud.

His dam Felicitas is the half-sister of Django Unchained (by Don Juan de Hus), who won the 4-year-old competition in Münster, qualified for the German Championships and was a coveted auction candidate.

The dam's sire is Floresco NRW, who has twice received Olympic honours.

His grand-dam Daphne is the full sister of Duvalier, successful in Grand Prix, and of Monsieur D'Artagnon, successful up to Inter I. Her daughter St.Pr.St. Holli (by Hohenstein/T.) produced the Grand Prix horse Daniel Craig (by De Niro) and Fidibus (by Fidertanz), placed up to Inter I.