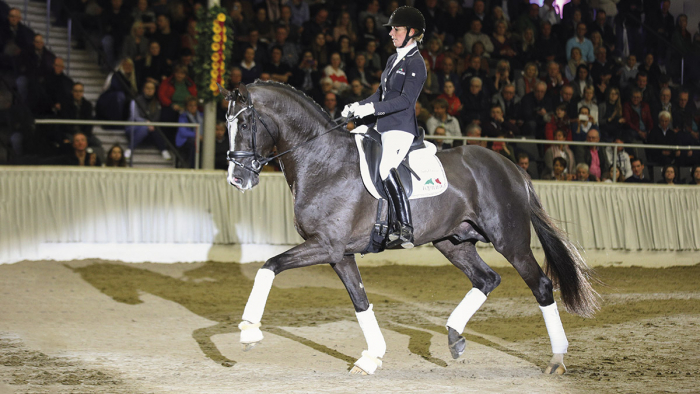 The foals of Sezuan's Donnerhall are always very popular with buyers. His daughter Savana was the second top price of the Verden Online Auction, with a final bid of 25,500 Euros. With his first crop of foals, Sezuan's Donnerhall has secured himself the reputation of producing foals with exceptional paces. His offspring impress with their brilliant conformation, correctness of the foundations, great power and natural balance.

Sezuan’s Donnerhall began his career as two-time record stallion performance test winner. He completed his 14-day test in Neustadt/D. with an overall score of 9.4 and his 50-day test in Schlieckau with an overall score of 9.19. The judges gave the perfect score of 10 for his canter, and 9.5 for rideability, willingness to perform and overall impression.His sire Sezuan achieved the unique record as a breeding stallion of winning the World Championships for young dressage horses three times in a row, at the age of five, six and seven. He then won international competitions up to Inter I and is now being prepared by Patrik Kittel/SWE for his first Grand Prix competitions. Previously, he had already made a name for himself as the absolute record winner of his stallion performance test (ten times 10), Danish Champion Stallion and Danish Dressage Horse Champion. He has produced over 30 licensed stallions, including So Unique, Hanoverian stallion market top price, German Champion and World Champion of young dressage horses.

The grand-dam Dubiola produced with Sandro Hit the licensed stallion San Schufro, who was also successful up to advanced (S) level, and a full brother who was also licensed.