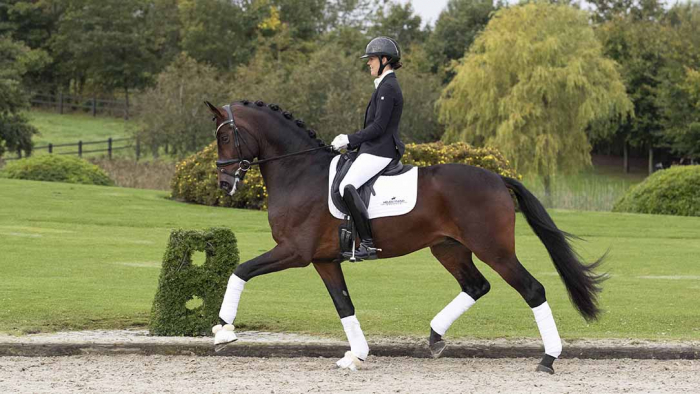 Right from the start, Rockabye S lived up to the high expectations of his sport potential. The radiantly beautiful youngster always received top marks at his stallion tests in Denmark and his championship appearances in Germany: 10 for canter, 9.5 for rideability, 9.0 for trot, walk and conformation. He was silver medalist at the German Championships in Warendorf and at the Hanoverian Riding Horse Championships in Verden, with a total score of 9.2 and 9.1 respectively. The pedigree connection to the valuable Bolero blood is also an interesting detail about this stallion, who is licensed in Hanover, was awarded a premium in Denmark and is by our World Champion and Vice World Champion of young dressage horses, Revolution.

His sire Revolution was Hanoverian premium stallion and the absolute top price of the Stallion Market in Verden. In Denmark, he was also named premium stallion and won his stallion performance test with seven times the maximum sore of 10). When he won the Danish Dressage Horse Championships with Andreas Helgstrand/DEN, he received four times the maximum score of 10 and in 2018, he won the gold medal at the World Championships for young dressage horses with a total of 9.62 (9.8 for trot, 9.0 for walk, 10 for canter, 9.3 for submission, 10 for perspective). In 2019, he won the silver medal at the World Championships for six-year-old dressage horses, very close behind the champion: 10 for trot, 9.6 for canter, 9.0 for walk, 8.8 for submission, 9.8 for perspective, 9.44 overall. At the subsequent Danish Championships, Revolution was awarded 10 for all three paces. He won the gold medal with an overall score of 9.6. As a seven-year-old, Revolution made his debut at advanced level with a victory and over 77% in Prix St. Georges. He was also selected for the World Championships for young dressage horses, which, however, could not take place due to the coronavirus pandemic.

The dam Bellevue S produced the Hanoverian Elite Auction foal Roache, who is also by Revolution.

The dam sire is by the exceptional stallion Brentano II. Belstaff was the dressage winner of his stallion performance test (index 143.64) and overall second Reserve Champion. He won young horse classes, was Hanoverian Vice Champion and was placed in dressage competitions. He was then successful in Grand Prix with Betina Jæger/DEN at the CHIO in Aachen. The pair were also part of the Danish team placed seventh at the World Equestrian Games in Tryon/USA in 2018. From his short time standing at stud, he produced three licensed stallions and several advanced (S) level horses.

In the third generation appears the heir to the line founder Lauries Crusador xx's throne, Londonderry.