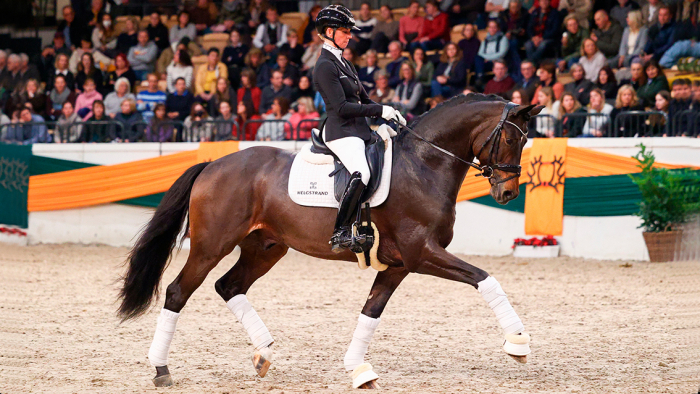 In 2020, the Trakehner licensing commission in Neumünster described the winning stallion Rheinglanz, who is now continuing his triumphant progress under saddle, as a "very special stallion". Ridden by Eva Möller, he was unbeatable at the Trakehner Riding Horse Championships: 8.5 for trot, 9.5 for canter, 8.5 for walk, 9.5 for training, 8.5 for conformation, and an overall score of 8.9. At the German Championships, Rheinglanz also performed brilliantly with 8.5 for trot, canter and rideability, 9.0 for his conformation and 8.0 for walk. With a score of 8.6, he won the bronze medal against strong competition. At his stallion performance test in Schlieckau, he consistently received scores between 8.0 and 9.0, with a rideability score of 8.75. With an overall score of 8.38, he was placed sixth in the strong field of 39 candidates.

The sire Helium is a great-grandson of the great elite stallion Gribaldi through his sire Millennium.

His dam St.Pr.a.Pr.St. Rheinhilde, a half-sister of the elite stallion Rheinklang (by Gribaldi), was Reserve Champion of the central mare registration in Rhineland in 2009 and won the Ic class prize at the Rhineland regional show.

From the traditional dynasty of Regatta.

Rheinglanz is stationed at Helgstrand Germany