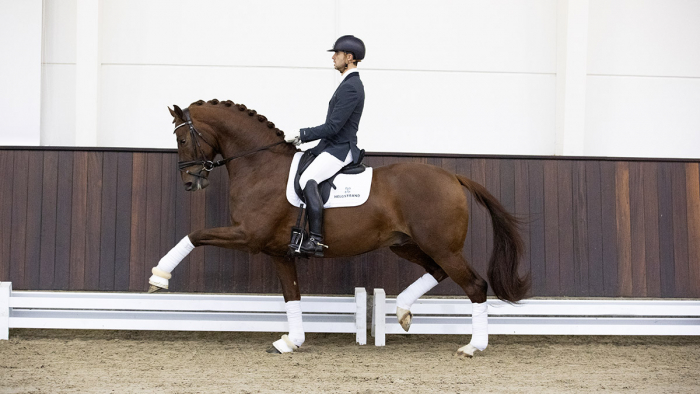 With the award of premium stallion of the Danish licensing and stallion performance test winner in Denmark, the career of our stallion My Vitality continues to gain momentum. At his 35-day test, he received 9.5 for rideability and canter, 9.0 for trot and 8.5 for walk. Overall, the younger full brother of our stallion Vitalis achieved a fantastic score of 902.5. We are sure he will follow his brother Vitalis' footsteps, who has made headlines from the World Dressage Championships for young horses to his victory in the Burg Cup.

His first foals are eagerly awaited.

His sire Vivaldi was Reserve Champion of his stallion performance test in the Netherlands. In 2007, he won the Pavo Cup for five-year-old dressage horses and in 2008 and 2009, ridden by Hans Peter Minderhoud/NED, he won the KNHS/KWPN stallion competition, where he was awarded 10 for his trot. He was then internationally successful up to Prix St. Georges. In 2013, he won the VHO trophy at the KWPN licensing. After that, he was predominantly used for breeding. Vivaldi produced numerous exceptional stallions, namely in the Netherlands with Desperado N.O.P./Emmelie Scholtens/NED, Glock’s Dream Boy N.O.P./Hans Peter Minderhoud/NED, Expression/Diederik van Silfhout/NED, Eye Catcher and Ferdinand, and in Germany with Van Vivaldi (Westphalian Reserve Champion), Versace (Oldenburg Reserve Champion), Cennin/Madeleine Witte-Vrees/NED (Oldenburg Ic main premium stallion), Veneziano/Daniel Bachmann Andersen/DEN (Oldenburg second Reserve Champion), Livaldon (Hanoverian premium stallion), Vom Feinsten OLD/Frederic Wandres (fifth at the German Championships) as well as Vivino, record top price of the Stallion Market, sold for over two million euros and the year's best Hanoverian premium stallion.

His dam Tolivia was the three-year-old Champion Mare in the Netherlands.

The dam's sire D-Day was Oldenburg premium stallion in 1994, and winner of his stallion performance test in Neustadt/D in 1996. In sport, he won competitions up to Small Tour. From a breeding perspective, he especially left his mark in the Netherlands and in Sweden.

The great-grand-sire Argus was successful in Grand Prix in dressage but also in show jumping and Aktion J who follows in the fourth generation counts as one of the most successful dressage stallions of his generation ridden by Gyula Dallos/HUN.

My Vitality is stationed at Helgstrand Dressage Denmark