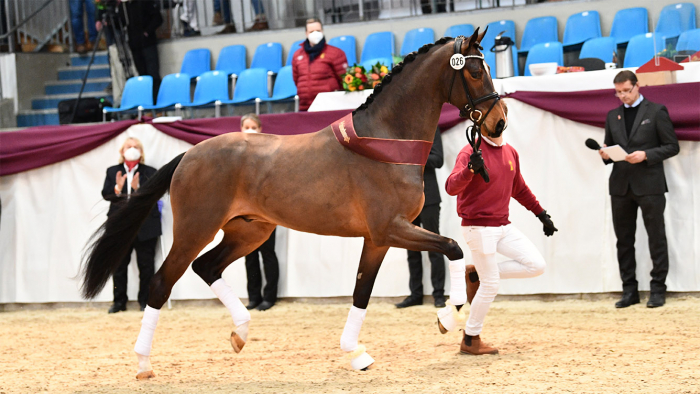 A stallion that one can hardly imagine more beautiful", enthused Jörg Schrödter on behalf of the licensing commission at the 18th edition of the DSP Stallion Days in Neustadt/D., where It's Easy was called to the premium ring of the best of the year. "His trot is close to perfection, very uphill, fantastic hindquarters and very balanced." He received a 9.5 for trot. "The canter is just as good as the trot, and the stallion also showed a good walk, thanks to his inner calmness."

His sire Ibiza combines the genes of the exceptional sires Vivaldi and Jazz and comes from the same dam line as Charmeur, Zhivago and Zuidenwind. In 2017, he completed his stallion performance test in Adelheidsdorf with the expected highlights (9.5 for walk, 9.0 for trot and canter). At the World Championships for five-year-old dressage horses in 2018 in Ermelo/NED, Ibiza qualified for the final with a victory in the Small Final, and finished sixth. In 2019, he won an intermediate (M) level dressage test at first go and continues to be prepared by Emmelie Scholtens/NED for a career in the dressage arenas. Around 20 stallions have been licensed from his first two crops of foals, including the premium stallions Imani AW, Inverness S and the DSP dressage Champion and stallion market price record holder Il Silenzio M and the Westphalian second Reserve Champion Imperial MT.

His dam St.Pr.St. Pik Sunshine is the half-sister of Don Ravel/Jeannine Merit Pelzer (by Don Romantic), who is internationally successful in U25 Grand Prix competitions, and produced Johnnywalker (by Johnson), who is successful in intermediate (M**) dressage competitions. Her half-sister Pik Donga (by Duntroon) produced the licensed stallion Special Dark (by Sandro Hit) and Weltroon (by Weltmeyer), who was placed up to Inter I.

The dam's sire Sunny-Boy, from the great Sandro Hit's first crop of foals, is out of the Donnerhall-daughter Fantastica, the full sister of the star sires Don Schufro and Don Primero, and goes back to the famous Vornholz line of Finnländerin. Sunny-Boy was placed in the final of the German Championships and was victorious up to high level. He has produced 21 licensed stallions and numerous offspring who are successful at advanced (S) level. He often appears on the dam's sire side of stallions, for example with Zalando, Zirkon, Quatergold and Fürstinels.

It's Easy is stationed at Helgstrand Dressage