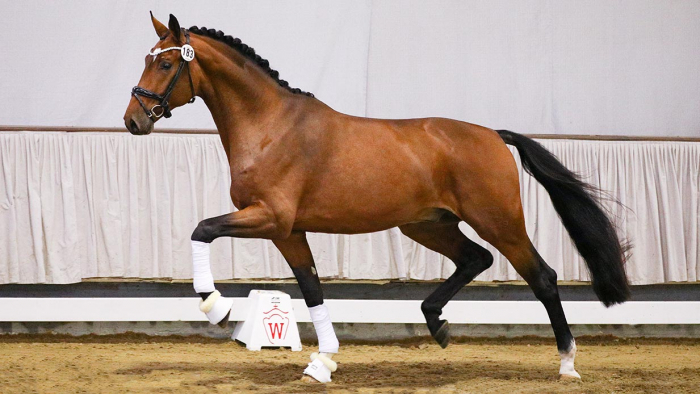 Homerun is a very special stallion for your consideration. He combines the spectacular freedom of shoulder, natural balance and powerful dynamics of the Gelderland breed with the large frame, basic paces and elegance of movement of the warmblood breed, whereby Henkie, Sir Donnerhall and Rohdiamant, probably the most outstanding representatives in direct succession, determine the pedigree of Homerun.

The dam sire Sir Donnerhall I has already earned the status of "trademark stallion". Himself second Reserve champion of his licensing, Regional Champion, record winner of his stallion performance test, Vice World Champion of young dressage horses, German Champion and winner of the main premium, he can refer to over 100 licensed sons. He often appears on the dam's sire side, for example with the Champion Stallions Bonds, Feinrich and For Romance I OLD, the premium stallion For Romance II, who is also successful at advanced (S) level, the Westphalian Champion Fürst Magic, who is victorious in Inter I competitions, the Vice German Champion and advanced (S) level serial winner Lilliano OLD/Dorothee Schneider and the German Champion Revenant. One of his daughters also produced the Oldenburg Champion Mare, German Champion and P.S.I. price highlight Fasine OLD.

His grand-dam Talysha-Rubina M produced Fiderstern (by Fidertanz), who is internationally successful in Young Rider competitions and the Small Tour.

Rohdiamant, who appears in the third generation, was Champion Stallion, German Champion and victorious in Grand Prix and produced numerous successful sport horses.

His great-grand-dam Tankola produced Serafina (by Sunny-Boy), who was successful up to Inter I in the USA.

Homerun is stationed at Helgstrand Germany