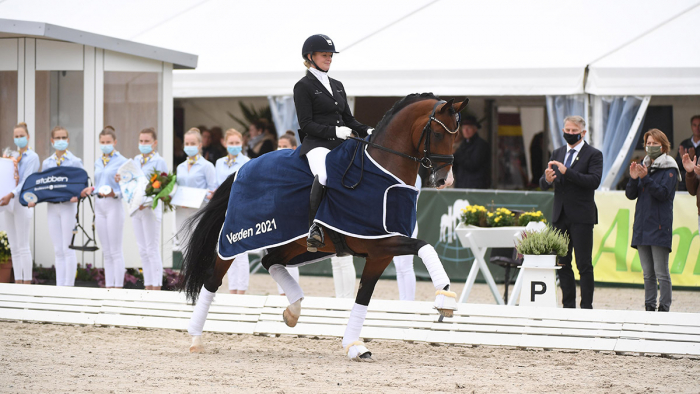 Trot - 10! Perspective - 10! Walk, canter, rideability - 9.5! 9.7 - Gold!!! Hesselhøj Downtown's final performance at the World Championships for five-year-old dressage horses in Verden offered pure goose bumps. Under his rider Jeanna Hogberg/SWE, this picture-perfect exemplar of drive, elasticity and mechanics showed himself to be a "very obedient and happy looking horse," as head judge Susanne Baarup/DEN enthusiastically described it in her commentary.

At the Danish Dressage Horse Championships that followed, the judges went even a bit higher in their evaluation for Hesselhøj Downtown Vorstellung: a dream score of 10 for trot and overall impression, a 9.8 for canter and rideability, and a 9.6 for walk. In 2020, he was the measure of all things at the sifting for the four-year-old championships. Anders Sjøbeck Hoeck was in the saddle then. The judges awarded a 10 for canter and perspective, a 9.8 for walk, a 9.7 for trot and a 9.5 for rideability. In 2019, following his licensing in Herning/DEN, Hesselhøj Downtown completed his stallion performance test with uniformly good scores in all aspects.

His sire Hesselhøj Donkey Boy, himself the winning stallion at the licensing in Denmark, HLP winner and elite stallion, won silver and bronze at the World Dressage Horse Championships and is victorious in the international Small Tour. So far, four of his sons have been licensed, in addition to the World Champion Hesselhøj Downtown, his full brother Hesselhøj Donkey Boss, 2021 premium stallion in Denmark.

The dam's sire Zack took part in the Olympic Games in Tokyo/JPN with Nanna Skodborg Merrald/DEN and narrowly missed a medal with fourth place in the team. Under Daniel Bachmann Andersen/DEN, he was part of the Danish team at the World Equestrian Games in Tryon/USA and the European Championships in Rotterdam/NED. In 2018 and 2019, the pair placed in the World Cup Finals. Zack, who is an elite stallion and Stallion of the Year in Denmark, produced over 40 licensed sons, including our Vice Bundeschampion Zaunkönig. Thanks to the sporting successes of his offspring, including the Grand Prix horses Zap Zap/Astrid Neumayer/AUT, Glock's Zonik N.O.P./Hans Peter Minderhoud/NED, Zick Flower and Zepter/both Cristian Tudela Ruiz/ESP and ZigZag/Gilles Ngovan/SUI, he already ranks among the top 30 of the world's best dressage sires.

The pedigree is followed by the Hanoverian Ragazzo and the Trakehner Schwadroneur.