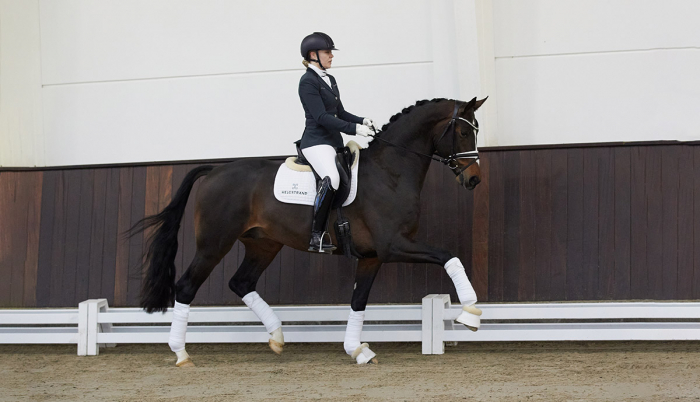 This youngster is impressive in all aspects. At his licensing in Münster-Handorf in 2021, Geronimo G, who has a beautiful conformation, showed very light-footed paces, was always relaxed, and demonstrated a lot of power, both on the lunge and loose. Furthermore, out of one of the strongest performing dam lines ever, we have high hopes for Geronimo G.

His sire Glamourdale became World Champion of seven-year-old dressage horses in 2018, having already been placed in the World Championship Final of five-year-olds in 2016. With Charlotte Fry/GBR, he won international Grand Prix competitions.

His dam is Hann.Pr.St. Evita G, who was victorious in young dressage horse competitions with Marion Wiebusch/GER.

His great-grand-dam, St. Pr. St. Habanera, also produced the intermediate (M**) dressage horse Habanero Uno (by Hotline) and the mares Fürstin Lewitz (by Fürst Heinrich), who is the dam of the international junior dressage horse and advanced (S) level dressage winner Springsteen (by Sir Donnerhall I)/Emma Gömmer/GER, and Fürstin Hohenstein III (by Fürst Heinrich), who produced the licensed stallion Fürst Furioso (by Bretton Woods), who was also successful in the international junior tour.

With a hint of Trakehner blood

Located at Helgstrand in Denmark