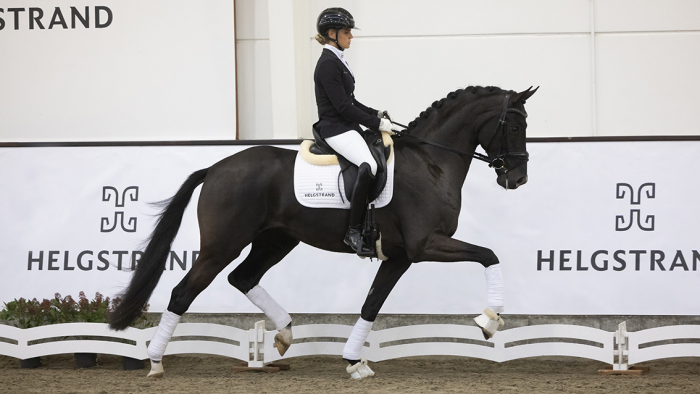 Galaxico’s presentation at the Westphalian licensing 2022 in Münster-Handorf was flawless and this eye-catching black stallion left as a premium stallion. The breeding director Thomas Münch particularly emphasised the power of this movement in his commentary. His body harmony with uphill tendency, beautiful front end and ability to carry weight on his hindquarters also make Galaxico a top offer for the particularly demanding breeder. Münch's appreciative summary is entirely in this spirit: “A future sire is growing up here.”

His sire Kastel’s Grand Galaxy Win T, a son of Apache/Emmelie Scholtens/NED, who came eighth at the World Cup, and out of a Jazz dam, was Danish Champion Stallion in 2014, Danish Vice Champion in 2015 and placed finalist of the World Championships for 5-year-old dressage horses in 2016. With his rider Charlotte Jorst, he was successful up to Inter II level. 14 of his sons have been licensed, including our World Champion, Vice German Champion and double Champion Stallion, Global Player, the premium stallions Hesselhøj Gnags and Giovanni Bell, and the second Reserve Champion of the Oldenburg main premium, Galaxy. His first offspring are placed at advanced level dressage competitions.

His dam's sire is Sandro Hit’s son, Samarant, who was silver medallist at the Hanoverian Championships, after winning the riding horse competition in Nienburg. He came sixth at the German Championships for four-year-olds. Sold to Denmark in 2008, Samarant continued his sport career with Joachim Thomsen/DEN and Andreas Helgstrand/DEN up to Small Tour. Samarant then successfully competed with Maria Fauerholm Christensen/DEN in international Junior competitions. Samarant produced numerous sport horses and is the dam's sire of, among others, Bohemian/Cathrine Laudrup-Dufour/DEN, European Vice Champion and winner in Aachen as well as Eye Catcher/Marie Bauer, who was successful in international Junior and Young Rider competitions.

His grand-dam St.Pr.St. Welfenkrone was champion mare in Hohenhameln in 1995, winner of her class at the Louis Wiegels Show in 1997 and Id prize winner at the Ratje Niebuhr Show in 2000. She produced the two licensed stallions Don Corazon (by Don Frederico; Inter I)/Leif Hamberger and the Champion Stallion Sherwood (by Sherlock Holmes; intermediate (M**) dressage), who were both successful up to Inter I. She also produced the two Grand Prix dressage horses Designer (by Dancier)/Uta Gräf and Dai Jin (by Don Frederico)/Frederic Wandres, the Inter I horse Sherwood Forest (by Sherlock Holmes)/Klaus Tönsfeuerborn, as well as St.Pr.A. Fabriana (by Fabriano)/Karin Prim-Tietz, who was successful in advanced (S) level competitions. Welfenkrone’s daughter Lena (by Longchamp) produced Dream of Beauty (by Dream of Glory), who was successful up to Inter I. Red Rubina (by Rotspon) was the dam of the licensed stallions Beradini (by Boston: Inter I) and Eminem M (by Emilio Sanchez) and Dancy (by Dancier) produced D’Olympus (by Don Olymbrio) and First Dancer (by Fürstenball), who were both approved for breeding.

From this line also descend the licensed stallions Labiat (by Le Primeur; Junior European Championship participant in Vidauban/FRA)/Amber Barton/GBR, Regazzoni (by Rubinstein; stallion performance test winner) and Wishing Well (by Werther; Inter I) as well as the Grand Prix dressage horses: Dragoco‘s Just Whisper (by Wenzel II), Scholar (by Scolari), St.Pr.A. Sissi (by San Remo), Watteau (by Weserstar), Harmony‘s Diabolo (by Desperados)/Michael Klimke, Sergio Leone (by Scolari)/Jessica Krieg, Rihanna (by Rock Forever; Inter II) and Rockefeller (by Rock Forever; Inter B). This list can also be completed with Darino Dackelblick (by De Niro), Readymix Wimper (by Waldhorn), Smirnoff (by Sir Donnerhall), Sir Arnold (by Schwarzenegger), Chopard (by Charmeur) and Kohlpharma‘s Armageddon (by A Jungle Prince), who were successful up to Inter I, the Prix St. Georges horses Feel Free (by Foundation), Safari Queen (by Scolari), Donna Bella (by Don Index), Kleppenhus Seb Sieboldii (by Sandro Hit) and Dream of Beauty (by Dream of Glory), as well as Deodoro (by Desiderio; advanced (S*) level), Danciano M (by Dancier; S*) and Le-Baron (by Loredo; advanced (S) level dressage and show jumping). 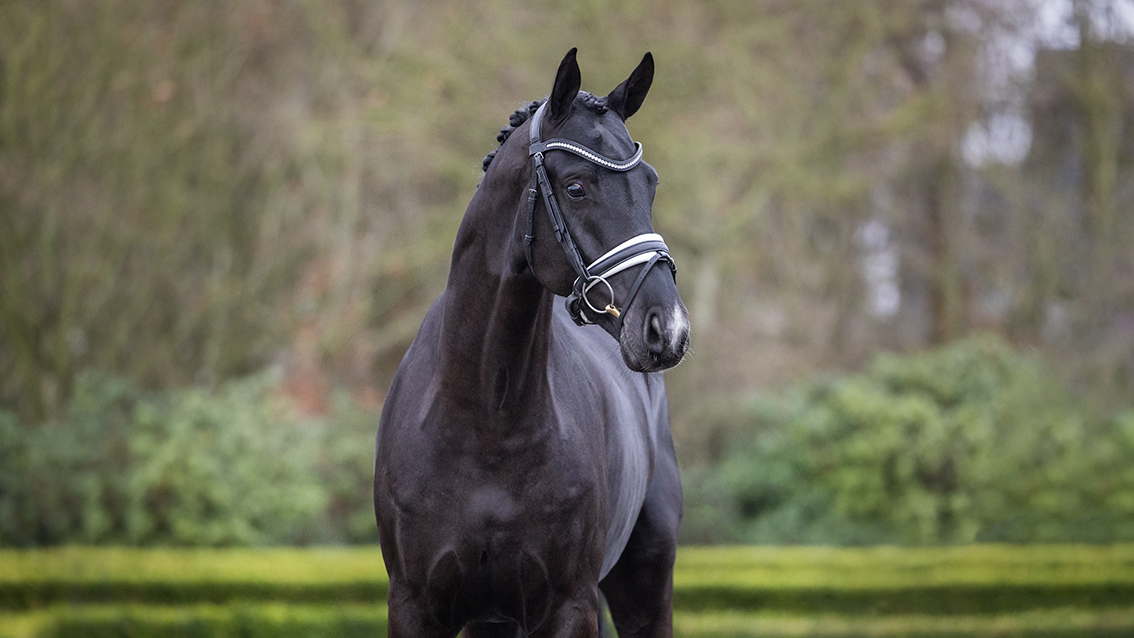