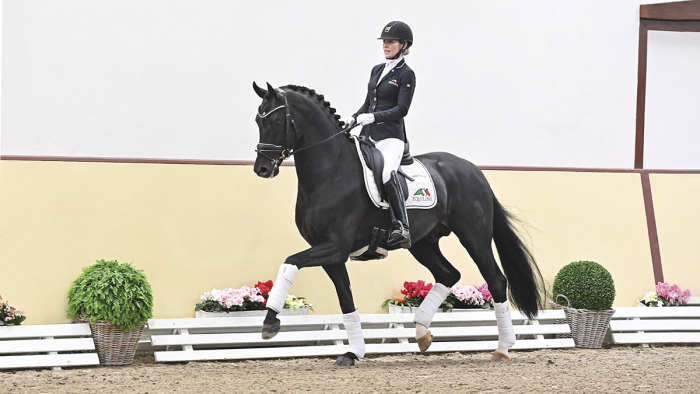 9.0 from a test rider and equally high scores for his paces. The beautiful Fürst Zonik PS, winner of his licensing and also equipped with unique genetics, passed his stallion performance test in Schlieckau with the expected highlights in terms of rideability, willingness to perform and quality of movement.

We are eagerly awaiting his first crop of foals.

His sire Fürstenball was Champion of the Oldenburg licensing, Champion of his stallion performance test, main premium winner, German and Oldenburg Regional Champion, finalist at the World Championships, victorious up to Prix St. Georges level, VTV dressage stallion, number one of the FN breeding valuation, Danish Elite Stallion and “Stallion of the Year” in Denmark. Furthermore, Fürstenball received the OLD designation, which is awarded by the Oldenburg Verband to the best Oldenburg bred horses. 84 licensed stallions, 264 premium mares and over 1000 horses successful in sport, 50 of them with victories and placings at high level in dressage, adorn his sire record.

His dam Zantana was placed in young dressage horse competitions and was sold in December 2019 at the P.S.I. auction in Ankum for 955,000 Euros, to a renowned dressage yard in the Netherlands. Her half-sister Neandra PS (by Negro) produced Top Noir PS (by Top Gear OLD), who was also sold through the PS Online Auction.

The dam sire Glock’s Zonik N.O.P., who unites the most influential stallions of Danish breeding with Zack, Romanov and Don Schufro, recently won team silver with Edward Gal/NED at the European Championships in Rotterdam/NED and took eighth and sixth places in the Special and Freestyle. With Zucchero Gold (sport name Zucchero OLD), he sired the World Champion of young dressage horses in 2019 and German Champion the year before and with Zum Glück RS2 OLD, the star of the P.S.I. auction in 2017 and the German Champion of the six-year-olds in 2019.

His great-grand-sire Sir Donnerhall I has already earned the status of "trademark stallion". Himself second Reserve champion of his licensing, Regional Champion, record winner of his stallion performance test, Vice World Champion of young dressage horses, German Champion and winner of the main premium, he can refer to over 100 licensed sons.

Bred to Sandro Hit, his great-grand-dam Contana produced the licensed stallion Swagman, who was victorious in Grand Prix with Kristy Oatley/AUS.