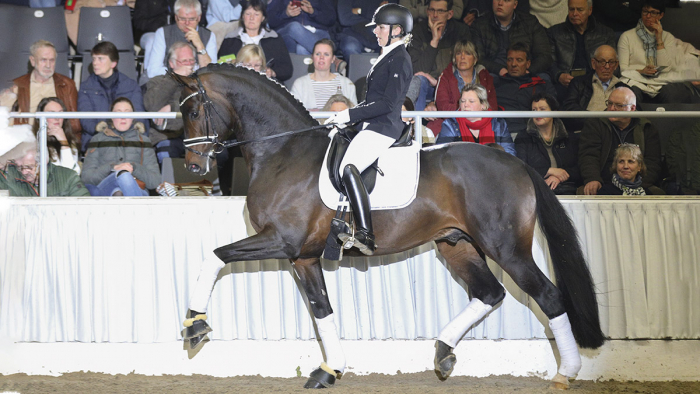 Fürst Toto’s first crop of colts up for licensing had it all: with Fifty-Fifty, he produced our acclaimed Reserve Champion at the Oldenburg licensing in Vechta. In Verden, Fürst Leo was approved for breeding. His foals also made the headlines. For the Best was top price of our PS Online Foal Auction, selling for 37,000 Euros. Fürst Toto won the Ib main premium for the outstanding quality of his offspring. After completing a remarkable stallion performance test, he easily qualified for the German Championships for young dressage horses.

From the very beginning, his sire Fürstenball made an impression on dressage horse breeding. Record-priced auction foal, Oldenburg licensing and main premium winner, German Champion, finalist at the World Championships for young dressage horses and victorious at advanced (S) level up to Prix St. Georges, he has produced over 90 licensed stallions, including our Champion Stallions Fürst Zonik and Fürsten-Look.

His dam Thery was placed in dressage young horse competitions under her sport name Toto Chanel and also produced our stallion Donier (by De Niro) and her daughter Fairytale PS (by Fürstenball) is the dam of our stallion Fair Deal OLD (by Franklin).

Grand-dam Lasira is the half-sister of Lord Schufro OLD (by L’Espoir), licensed stallion, Oldenburg Reserve Champion and placed twice at the German Championships and of the premium stallion Fürsten Hit (by Fürstenball). Lasira produced a son by Foundation who was licensed in Mecklenburg in 2021, her daughter Disney's Dory (by Desperando) celebrated her first successes at advanced level in 2021 and her daughter Gallery (by Governor) was placed with Andrea Timpe in international dressage tests for six-year-olds and produced Sergeant PS (by Sir Donnerhall I), who was also licensed in Mecklenburg and became the top price of 114,000 Euros at the Schockemöhle PS Online Auction.

Fürst Toto represents a legendary dam line from Gestüt Vornholz. Over 50 licensed stallions descend from the family of Finnländerin.