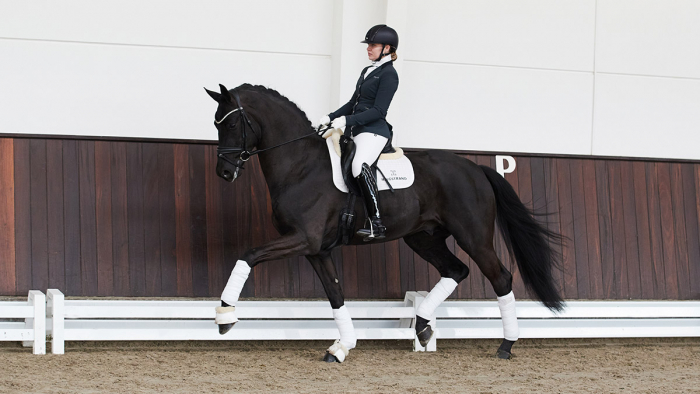 A stallion that could not have been built and painted more beautifully. This top athlete for the future has very good foundations. With a lot of nobility and charm and very chic. In movement, he presents himself in a superior manner. Already during the lunge work, he left no doubt that he would be highly placed", the interim breeding manager of Westphalian, Thomas Münch, expressed his enthusiasm about Forever Love. The desire for this remarkable Westphalian Champion Stallion was therefore high and at 800,000 Euros, he became the stallion market top price.

With Forever Love, his sire Fair Game (by Fürst Wilhelm) made his successful debut as a stallion sire. Fair Game completed his stallion performance tests in Neustadt/Dosse with 8.3 (for his 14-day-test) and 8.06 (for this 50-day-test). In 2018 and 2019, Fair Game qualified for the German Championships with victories in dressage young horse competitions. With the Westphalian Champion Stallion, he produced his first licensed son. One of his daughters was highly placed at the Regional Mare Show in Weilheim in the two-year-old class.

His dam Rock Z produced the German Sport Horse premium stallions Del Re and Davos (both by De Kooning), the latter was auctioned for 95,000 Euros.

His grand-sire Destano, a son of Desparados, Team World and European Champion and Olympic Champion ridden by Kristina Sprehe, has already conquered the Grand Prix arenas with Simone Pearce/AUT. The Oldenburg main premium winner has produced 25 licensed stallions, including Denoix PCH who was placed second in the Louisdor Prize final of the best young Grand Prix horses with Hubertus Schmidt.

Harvard, who follows in third generation, descends from the elite stallion Hohenstein I, who was Trakehner Stallion of the Year in 2002. Harvard's dam Carina is by the famous refiner stallion Cardinal xx and, as well as Harvard, she also produced the licensed Hanoverian stallion Davis Cup, two state premium mares, the Reserve German Champion Dakapo, three advanced (S) level dressage horses and the show jumping horse Top Gun.