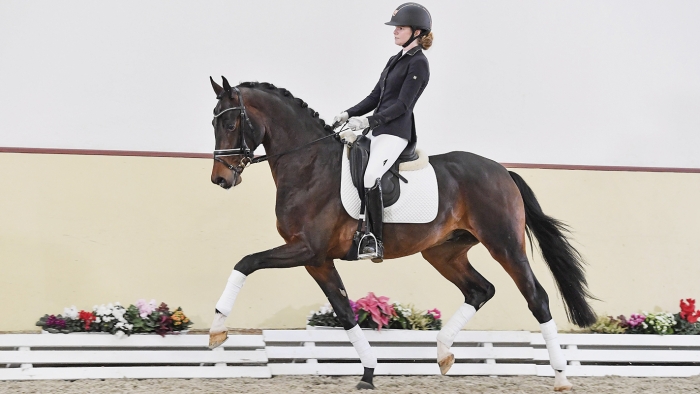 The beautiful stallion Franklin’s Love PS impresses with his power, swing and impulsion . A harmonious nobleman always willing to please.

His sire is the exceptional stallion Franklin: KWPN Champion Stallion, winner of his stallion performance test in the Netherlands, finalist at the World Championships for young dressage horses and victorious up to Prix St . Georges. Many of his sons have been licensed, including the KWPN Reserve Champion Kadans and Fendi, who was trained by Sönke Rothenberger.

His dam Sanrubina produced three other licensed stallions: Fürst Sandstein (by Fürst Heinrich), Touch of Love (by Tuschinski) and Decamerone (by Diamond Hit), who is successful at advanced (S) level.

Her daughter Lady Devinja (by De Niro) produced Froschkönig (by Fürst Heinrich), licensed stallion, Oldenburg Regional Champion and finalist at the German Championships, and Jazzmate (by Jazz) who is also a licensed stallion.