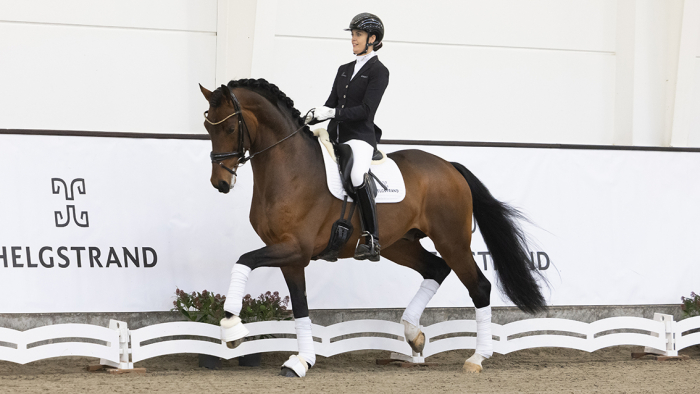 The Reserve Champion from Westphalia

Allow us to present Feinsten - Reserve Champion of the Westphalian licensing in 2021 - and an absolute cracker! This was also the opinion of the Breeding Director, Thomas Münch, who praised in his commentary, the already unbelievably uphill canter and the trot, which also had a lot of power and balance. In addition, the stallion knows how to present himself in the best manner and scores points with his excellent temperament, his control and his expression. The icing on the cake for Feinsten is the outstanding dam line, bred over generations. At his short test in Vechta in 2022, Feinsten already put this high assessment into practice under saddle: 9.0 for canter, 8.5 for trot and willingness to perform, 8.2 for rideability and 7.8 for walk, and was very well placed amongst the 28 participants. He completed his stallion performance test in Denmark as second Reserve Champion with equally high scores and a total of 850.0 points.

His sire, the elite stallion Franklin, began his career as KWPN Champion Stallion, winner of his stallion performance test in the Netherlands and finalist at the World Championships for young dressage horses. Since then, he has been successful in international Small Tour competitions. Many of his sons have been licensed, including the Reserve Champions Franklin’s Love PS and Kadans, the Oldenburg Regional Championship bronze medallist Fair Deal, the winner of the Ravn's Trophy, Slangerupgaard’s Flottenheimer, and our stallions Straight Horse Finest Hour and Franzé, who were licensed in Denmark. He has produced numerous offspring who are successful in sport, amongst whom Fendi/Sönke Rothenberger/GER, Louisdor Prize winner, Francis Drake OLD/Leonie Richter/GER, placed eighth at the World Championships for young dressage horses, Elektra di Fonte Abeti/Frederico Migue Mexia de Almeida/POR, Hanoverian Vice Champion, Franklin Hit/Michael Eilberg/GBR, British Vice Champion and Mambeau B/Antonio Verdejo Pérez/ESP, bronze medallist at the Championships for young dressage horses in Spain, particularly stand out.

His dam St.Pr.St. Reykjavik completed her mare performance test with the fantastic score of 8.97 (10 for rideability and 9.5 for trot and canter). She won young riding horse competitions.

His dam's sire Rock Forever I NRW was Reserve Champion of his licensing, won bronze and silver medals at the German Championships for three and four-year-old riding horses, was Vice German Champion of five-year-old dressage horses and was placed sixth at the World Championships for young dressage horses. In 2011, he came third in the final of the Nuremberg Burg Cup. In 2013, he came fifth at the German Young Riders Championships with Sophie Holkenbrink. He was then victorious up to Grand Prix level.

The stallions Florestan I and Parademarsch I also appear in the pedigree.

His great-grand-dam St.Pr.St. Patrice is the full sister of the licensed stallion Paretti and half sister of the licensed stallions Pazifik (by Parvenü) and Freudentanz (by Frühlingsstern). Her half sister Francis (by Francisco I) produced the stallion Ulysses (by Upan la Jarthe AA). Her half sister Fleurette (by Francisco I) is the dam of the advanced (S) level show jumping horses Agrippa (by Arpeggio, victorious in 1.45m show jumping) and Ladinos (by Lados) as well as the advanced (S) level dressage horse Rockefeller (by Rosendahl).

From the dam line also descend the licensed stallions Rosentänzer (by Royal Angelo I), Flammengold (by Florestan I, victorious in advanced (S) level dressage), Freestyle (by Florestan I), Silvester Star SN (by Sandro Hit), Dragon Hill (by Damon Hill), Decour (by Decurio), Flashback (by Franziskus, victorious in advanced (S) level dressage)/Dorothee Schneider, the premium stallion Ferentino (by Fürst Romancier), French Open (by Franziskus), the premium stallion Sky (by Sezuan), the Westphalian Champion Mare Romy (by Rock Forever I), the final ring mares Ice a Bella (by Asgard’s Ibiza), Vlorentine (by Vivialdi) and First Kiss (by Van the Man), as well as numerous sport horses, including the Grand Prix dressage horse Languedoc (by Laomedon), and many auction top prices. 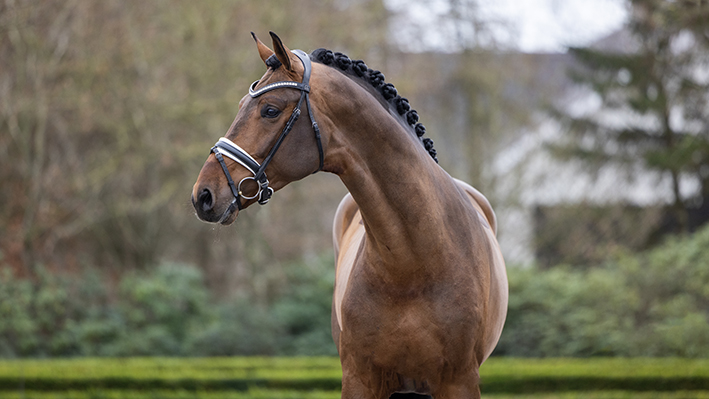