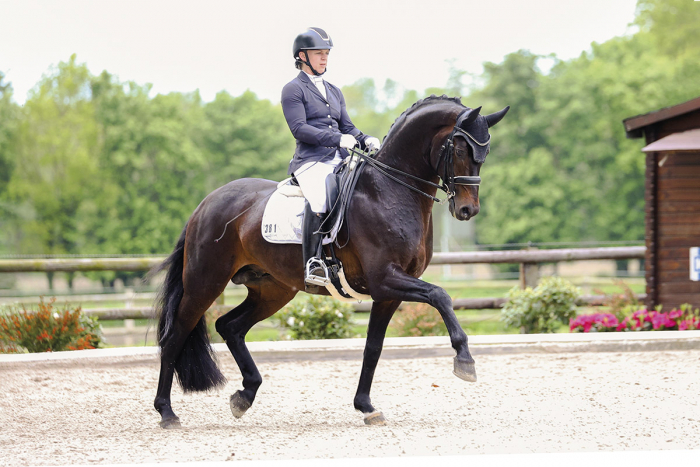 From Feinrich‘s first crop of foals, his first sons were licensed in 2019, including a premium stallion in Westphalia. His offspring are very promising under saddle and clearly resemble their sire with their wonderful type and big paces.

In 2015, Feinrich was the glowing winner of his licensing and completed his stallion performance test with flying colours.

In 2018, he won young horse dressage competitions of his age group and qualified for the German championships with Isabel Freese. Feinrich’s breeding is also very special: Through his sire Fürst Heinrich, the paternal line of the great Furioso II is combined with that of probably the most important mare in modern Oldenburg breeding history, El. St. Gesina.

Five other sons of Gesina were approved: For Romance I OLD, Oldenburg Champion Stallion, Main Premium winner, Burg-Cup finalist, VTV dressage stallion and successful in Grand Prix, his full brother and premium stallion For Romance II, who also stands at our stud, Fürst Donnerhall PS (all by Fürst Romancier), Don Romance PS (by Dante Weltino), who was Reserve Champion of his stallion performance test and third at the Regional Championships and Desino (by De Niro), who qualified for the German Championships.

High-quality sire and a very worthy representative of his dam line!