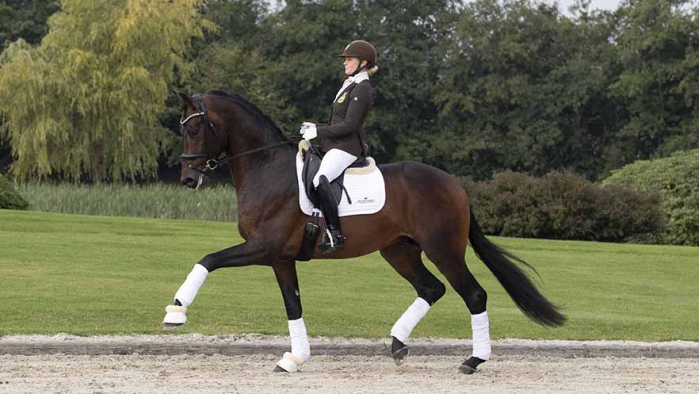 Dynamic Dream continues to climb the ladder of success. After his brilliant performance at the Westphalian licensing, which he left as the acclaimed winner and price record holder of the stallion market, this radiantly beautiful stallion now also holds the title of premium stallion of the Danish licensing. At his 14-day test in Denmark, he received dream scores: 9.0s for trot and canter, 10.0s for willingness to perform, temperament and character. We look forward to seeing Dynamic Dream's first foals.

The sire Glock's Dream Boy N.O.P., ridden by Hans Peter Minderhoud/NED and sired by Vivaldi, is one of the most successful dressage stallions of all times. He most recently won team silver at the European Championships in Rotterdam/NED, having previously finished tenth in the World Cup final in Gothenburg/SWE and been part of the Dutch team placed fifth at the WEG in Tryon/USA in 2018. As a six-year-old, Glock's Dream Boy N.O.P. won the bronze medal at the World Championships for young dressage horses. Amongst his licensed sons are the KWPN Reserve Champion Ierland and our Danish Premium Stallion Dynamic Dream. He has produced numerous top sport and breeding horses, such as Johnny be Goode/Emmelie Scholtens/NED, seventh at the World Championships for young dressage horses, Imagine/Bart Veeze/NED, finalist at the World Championships as well as Hannelinde GLN, who was also successful in Ermelo.

His dam Safira is the half-sister of the internationally successful show jumping mare Lady Pezi (by Lord Pezi)/Alexander Hufenstuhl/GER.

Thanks to his offspring placed in Grand Prix competitions like Sai Baba Plus/Boaventure Freire/POR, Semper Fidelis/Heather Blitz/USA and Syriana/Mary Hanna/AUS, his dam's sire Sir Donnerhall I is placed amongst the top 20 of the WBFSH ranking list of the world's best dressage sires. Himself second Reserve champion of his licensing, Regional Champion, record winner of his stallion performance test, Vice World Champion of young dressage horses, German Champion and winner of the main premium, he can refer to over 100 licensed sons. As dam sire, he appears in the pedigree of Michael Jung's eventing horse Corazon as well as the Oldenburg Champion Stallion, Main Premium Winner, Burg-Cup finalist and Grand Prix winner For Romance I OLD, the premium stallion For Romance II, who stands at our stud and is placed in international Grand Prix competitions at only seven-years-old, and the Oldenburg Champion Mare, German Champion and P.S.I. price record holder, Fasine OLD.

His grand-dam Annabell is the half-sister of the mare Fürstin (by Fürst Grandios), who produced the licensed stallion Grandios (by Real Diamond), and of the mare Madonna (by Monsieur x), who produced Markus Renzel's horse Chico (by Cordobes I) as well as five other advanced (S) level show jumping horses.

The NRW state stud stallion Arpeggio, who appears in the third generation, was Reserve Champion of his licensing in 1997 in Münster and frequently sired horses for top show jumping competitions such as All Inclusive NRW/Dennis Lynch/IRL and Ludger Beerbaum/GER, Acomet/Theo Muff/SUI and Jedoch/Marco Kutscher/GER and Henrik von Eckermann/SWE. He has produced 17 licensed stallions and 101 premium mares. Arpeggio appears on the dam’s sire side of the Grand Prix winner Brooklyn/Mario Stevens and Pikeur Bellevue/Klaus Brinkmann.

The stallions Cyrian and Frühtrunk as well as numerous sport horses, such as Prosecco/Sebastian Holtgräve-Osthues also come from this line.

Because of the great demand, it is only possible to order semen two times per heat.