This weekend the 2018 KWPN Stallion Licensing Show took place and with the purchase of three more promising young stallions - including the champion stallion with category no. 553, Kremlin MD by Governor/Rousseau/United, Helgstrand Dressage is now able to set record in the number of participating stallions at this year's stallion show in Herning.

Out of the 120 stallions registered for the stallion show, 53 were approved in the Dutch breeders' society KWPN. Among them were 2 sons by Helgstrand's top stallion Franklin and one by Grand Galaxy Win. Helgstrand Dressage managed to buy three premium stallions; the champion stallion Kremlin MD by Governor/Rousseau/United and the two premium stallions Kadans by Franklin/Jazz and Knock-Out by Expression/Ferro. Knock-Out was bought together with Søren Grønborg, who also is part owner of the top stallion Revolution by Rocky Lee/Rouletto. Governor won silver at the 2017 WCYH in Ermelo for 6yo and Franklin, who was champion stallion at the 2013 KWPN Stallion Licensing Show and in addition won the Dutch performance test.

All three stallions will be presented at the DWB’s stallion licensing 2018.

The results of the 2018 KWPN Stallion Licensing Show:

Just before new year, Helgstrand Dressage was able to reveal in its Christmas greetings with highlights from 2017 that Helgstrand is now ready to go for another exciting chapter in the Helgstrand history, a stallion station in Germany.

- 2017 has been another year with high demands for semen by our top stallions. In order to meet the growing demand from Germany in particular, we have chosen to establish a stallion station at Dr. Ulf Möller, who together with his wife, Eva is based at Center Sudenhof in Hagen, Andreas Helgstrand says proud.

Recently Helgstrand Dressage has opened a sales stable in Wellington, USA, and now they can take another exciting step with the stallion station in Hagen.

- We have not yet decided which stallions should be in Hagen, but it is important for us to point out that semen can be ordered from all stallions, wherever they are located, Andreas says.

Helgstrand Dressage has for a long time been working closely together with Zuchthof Klatte in Lastrup, Germany and Andreas emphasises, that the cooperation will continue even though Helgstrand has established a branch in Germany.

- Zuchthof Klatte has been a great help in the desire to enter the German market. They have a huge network, and the entire team Klatte has many years of experience and thus able to offer competent consultancy to the many German breeders. For this reason, we continue the cooperation so that breeders can both order semen at Zuchthof Klatte and at our stallion station in Hagen, says Andreas.

Traditionally the annual stallion show at Zuchthof Klatte takes place on February 9th, where Helgstrand Dressage will participate with a selection of the best stallions, some of which will remain in Germany afterwards. 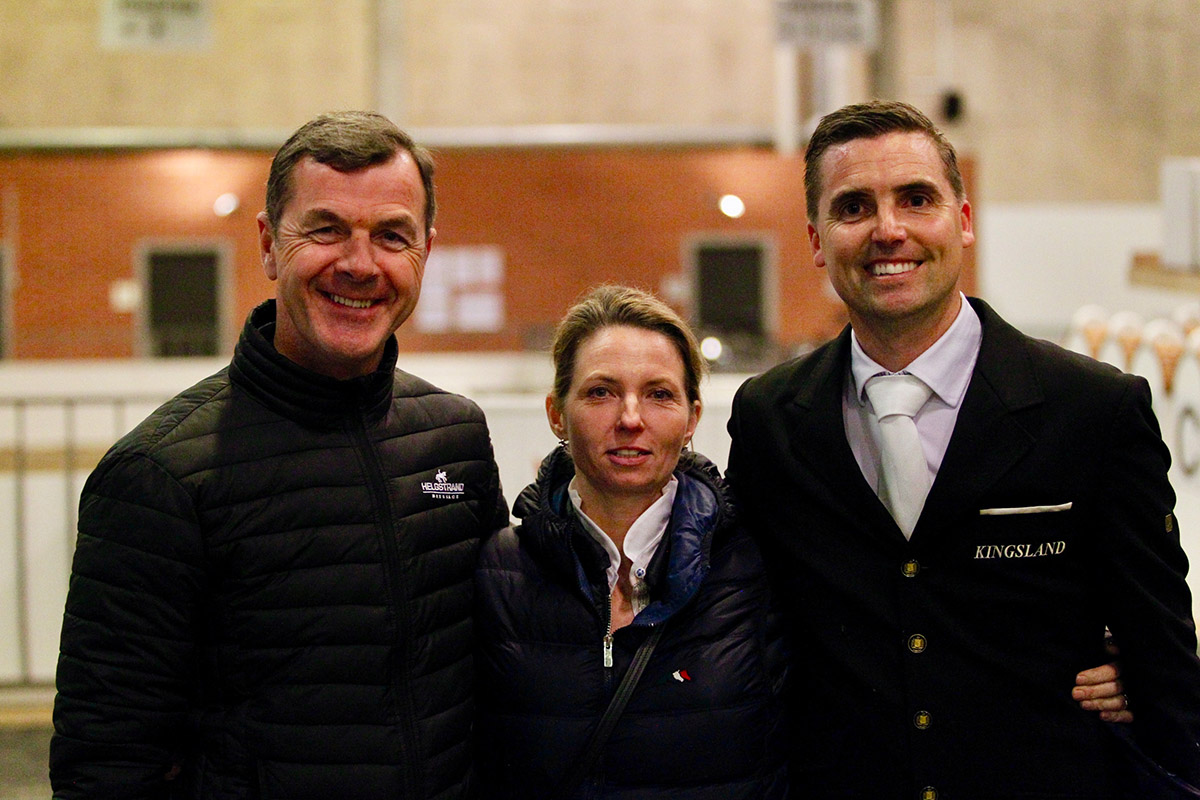 No less than 9 out of 11 stallions from Helgstrand Dressage were selected by the Danish Warmblood licensing committee on yesterday's pre-selection at Vilhelmsborg in Aarhus.

The day started with free presentation in the arena followed by lunging. In total 9 young stallions from Helgstrand Dressage were selected for Danish Warmblood Stallion Show 2018. In total 27 stallions, out of 60 were selected for the main licensing next year. The licensing committee consisted of Claus Hansen, Bjarne Nielsen and Johnny Sørensen.

The selected stallions from Helgstrand Dressage:

More than 200 people had found their way to Helgstrand Dressage USA and followed by a delicious brunch the 21 sales horses which recently had been travelling all the way from Denmark were presented. Dr. Ulf Möller, who is at the manager of the new sales division, commented the sales horses as the presentation took place. There were both young promising talents as well as older horses, which have already shown their worth at shows.

Just a few days ago, Helgstrand Denmark launched its new jewellery collection at the Christmas event at Helgstrand Dressage, Denmark, and now Marianne has taken another important step in the company's history.

- I have already experienced great interest from the Americans who have been visiting our place in Denmark, so there was not much consideration before I chose to join the USA adventure in order to show my jewellery to the Americans, says Marianne. 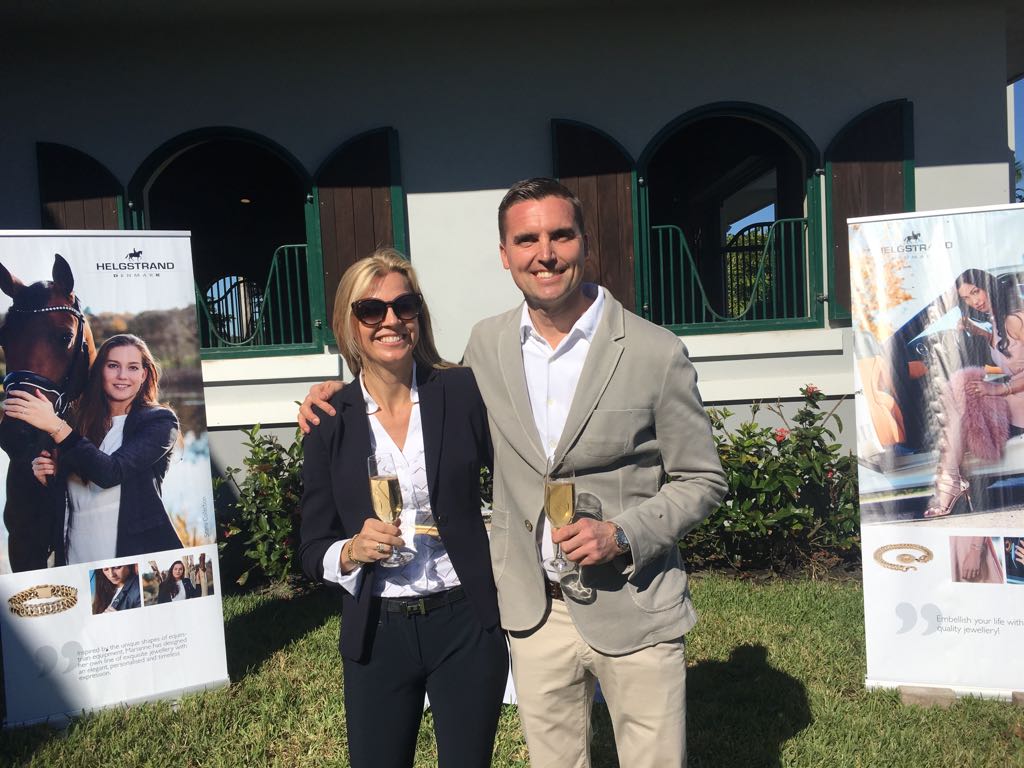 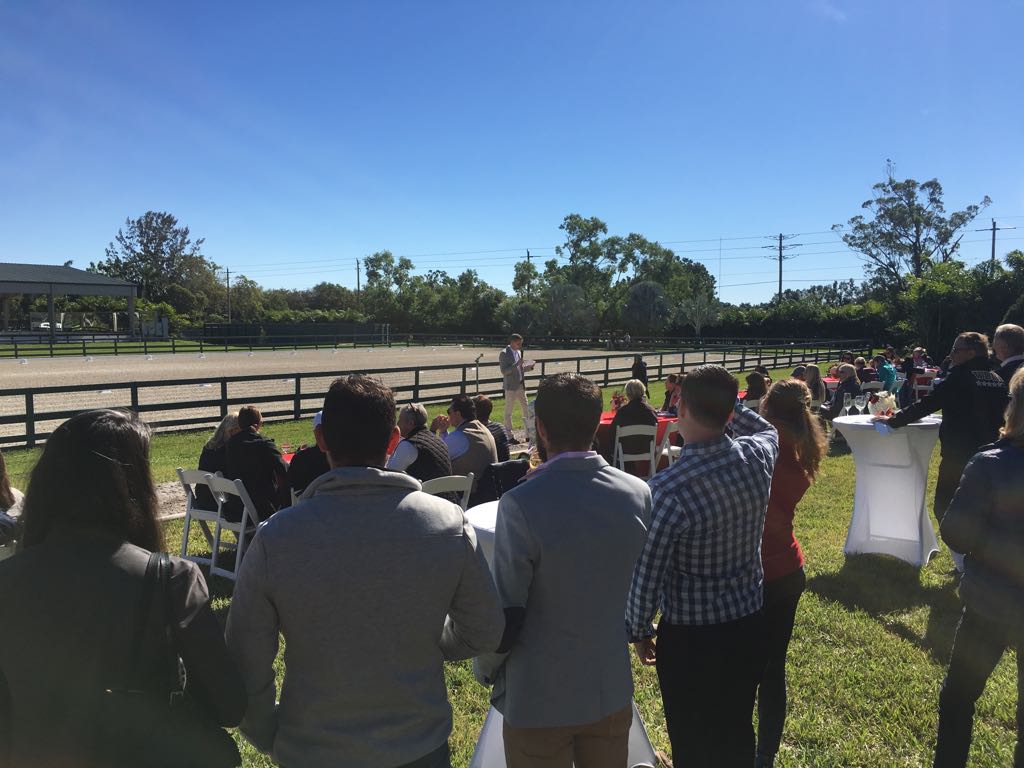 This week DWB's pre-selection starts and a total of 80 stallions will be presented for DWB's licensing committee. Out of total 80 stallions 15 are by Helgstrand Dressage's top stallion, Grand Galaxy Win (Apache/Jazz), which was awarded Champion Stallion at the DWB's Stallion Show in Herning 2014.

Helgstrand Dressage is presenting 10 stallions, including three stallions by Grand Galaxy Win. The pre-selection in Aarhus will take place on Wednesday 13th December at Vilhelmsborg and 47 dressage stallions and 21 stallions will be presented for the licensing committee.

The stallions have just finished their 35-day test at Tørring Ridecenter and have got their final test results. A total of 24 stallions have been tested at Tørring Ridecenter with master rider Torben Frandsen in charge of the 35-day test. The stallion's rideability and capacity in dressage were judged by master rider, Jan Møller Christensen. Out of 24 stallions 7 stallions were tested in jumping, 8 in dressage and 9 stallions in both disciplines. Testing in both disciplines is a requirement from the German horse breeding societies.

All stallions from Helgstrand showed really good shape, but especially Springbank II VH by Skovens Rafael/De Niro did very well and got the best result of the dressage test. With 10 in both the rideability and capacity from the test rider, he achieved an impressive final score of 954.5 points. Quaterhit by Quatergold/Sandro Hit placed second in the test with total 884 points and Valverde by Vitalis/Ampère finished up third with 876 points. 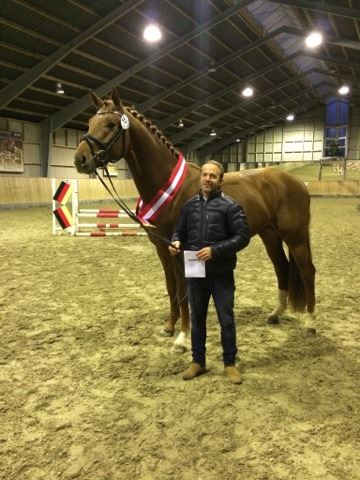 At this year's Oldenborg Stallion licensing Helgstrand Dressage has got two more approved stallions for breeding:

Both stallions showed great capacity and the judges were very impressed.

Find the results of the licensing here.

After the licensing the auction took place and Helgstrand Dressage managed to buy the very impressive stallion by Don Schufro/Stedinger in coorperation with Paul Schockemöhle and HP Horses.

The stallion showed very well during lounging and a promising potential as a future dressage horse.

He is a high-set and very well-moving young stallion.

He will be located at Paul Schockemöhle and semen will be available through HP Horses.

Watch video of the stallion here.

Today the 2017 Hanoverian Stallion Licensing in Verden took place. At the auction Helgstrand Dressage bought two new exiting stallions for the collection - among others, the auction's most expensive stallion, catalogue number 105 after Sezuan/Donnerhall/Weltmeyer. He was bought for no less than 650,000 euros.

Video of catalogue number 105 after Sezuan/Donnerhall/Weltmeyer.

Out of a total of 53 stallions 72 were licensed and Helgstrand secured another two top stallions - catalogue number 62 after Finest/De Niro/Weltmeyer, which was purchased for 360,000 euros and the auction's most expensive, catalogue number 105 after Sezuan/Donnerhall/Weltmeyer, purchased for 650,000 euros. The Sezuan colt impressed the crowd and stood out with a very powerful canter and very impressive trot.

In addition, Helgstrand Dressage's catalogue number 104 by Sezuan/Desperados was licensed at the 2017 Hanoverian Stallion Licensing.

Helgstrand horses help dressage riders on their way to the top

American Catherine Haddad-Staller has been very successful at international shows after she bought Sue by Sir Donnerhall/Welt Hit II at Helgstrand Dressage.

Catherine Haddad-Staller is a well-known name at international shows and, with the purchase of Sue she has achieved great places at Grand Prix level. Sue has meanwhile changed her name to Semper Fidelis and they have recently debuted at Grand Prix level at CDI Darmstadt in September and had great results. However, they have already improved and got placed second in the Grand Prix and in addition, she won the Grand Prix Special at CDI Le Mans.

Catherine has been sponsored by American Rowan O'Riley for the last 2.5 years, who bought the now 11yo mare at Helgstrand Dressage back in 2016, owned by Italian Gloria Colombo at that time. Gloria has educated Sue up to small tour, and then decided to sell her. She got to Helgstrand Dressage to continue her positive development.

- Of course, we are proud to see that our customers achieve such great results at international shows. Catherine is an incredibly skilled rider and it's just wonderful to see that her and Semper Fidelis make up such a great couple. We wish them all the best for the future and really looking forward to follow them at future shows, says Andreas Helgstrand. 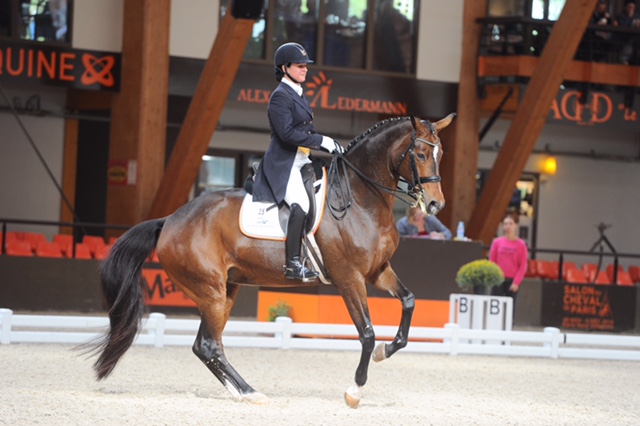 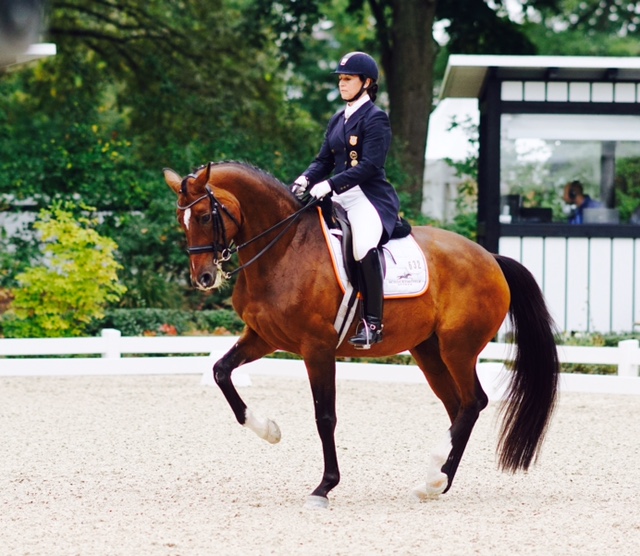 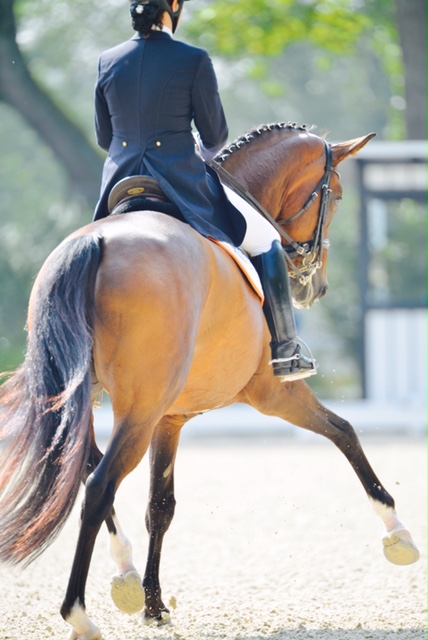 Helgstrand Dressage has just bought 5yo Dragon Welt by Dancier/Weltmeyer by Swedish Jan Brink from Tullstorp Dressage Stable who, despite his young age, has already achieved great results - in fact he is Sweden's most winning 5yo dressage horse with an average of 92.80.

- Dragon Welt is in a class of his own - we have followed him alongside his career and have seen how he has developed. He is a fantastic horse - a good combination of extraordinary gaits, good expression and fabulous temperament. Tullstorp Dressage Stable's rider, Ida-Linn Lundholm has done an amazing job training the stallion and we are looking forward to continue his education, but also, we are looking forward to offering another exciting stallion in our collection, says Andreas Helgstrand.

As 3yo, Dragon Welt won the Swedish championships Breeders Trophy with a total score of 92.60%, including 9.3 in trot, 9.2 in walk, 9 in canter, 9.5 in suppleness and 9.3 in overall impression. In 2016, Dragon Welt won again Breeders Trophy for 4yo with 10/10 from the test riders, including from Olympic equestrian rider Charlotte Dujardin. Among other victories in 2017, he also won the Gothenburg Horse Show for 5yo with 93.4% and later in Falsterbo he won the qualification by 89%.

At the performance test this year, he also performed very well, he got 8.5 in walk, 9.5 in trot, 9 in canter and 9.5/10 in reliability - and thus the highest average for both gaits and reliability.

Top marks at WBFSH in Ermelo

At the World Breeding Dressage Championships for Young Horses for 5yo in Ermelo, Dragon Welt finished second in the small final with a total score of 9.08 points, including 9.6 in trot, 8 in walk, 9.3 in canter, 9 in rideability and 9.5 in capacity, thus moving on to the final, where he ended up 9th with 8.72 points.

Out of top dressage horses 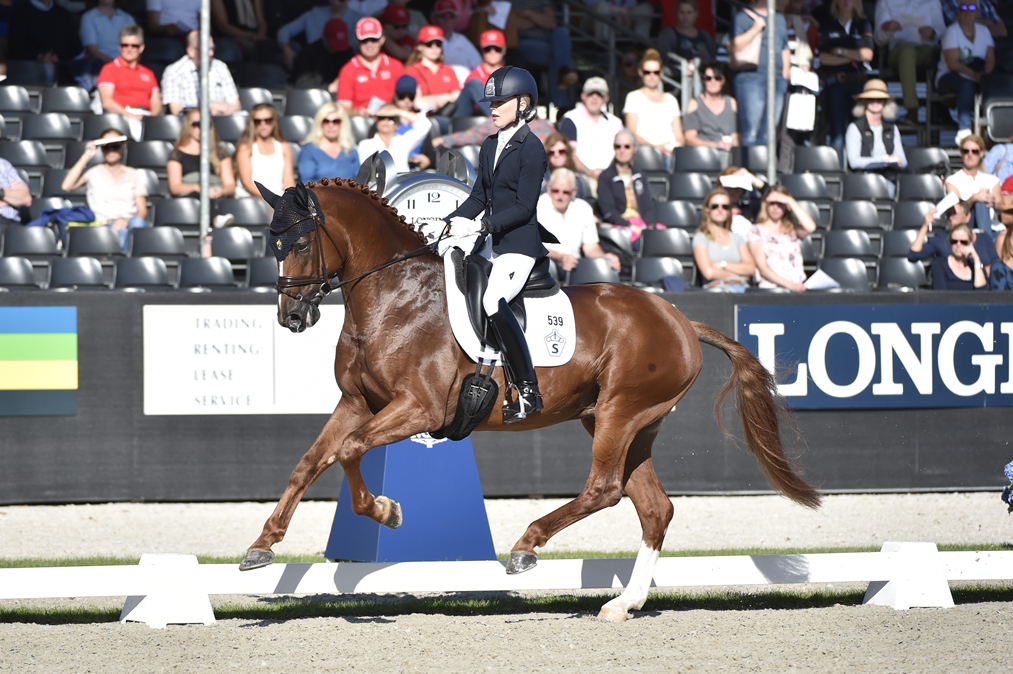