Sezuan ready for the 10-day test

Sezuan was energetic and ready today, when he arrived for the 10-day observation test at Vilhelmsborg. He was showing off, but balanced with a cool overview in the huge arena with his rider Emma Ahlberg.

We are crossing our fingers for at successful 10-day test, and look forward to having him home afterwards for a well-deserved vacation.

Today, Zonik received the final licensing in Danish Warmblood and the title Champion Stallion of 4-year-old dressage stallions. Moreover, he was awarded a breeder's silver medal and the Aage Ravn's Challenge Cup. Zonik did really well during all the tests at the stallion show in Herning. We have huge expectations for this stallion and look forward to following his future progress and results.

The national stallion show in Herning is off to a good start. Zonik and Sir Donnerhall II obtained the final licensing in Danish Warmblood on Thursday. Our fatastic young stallion Sezuan was also licensed yesterday. Today, Sunday, he will compete against the other 3-year-old stallions to become premium stallion or champion stallion.

In the championship for young horses, Andreas recorded yet another victory, winning with Møllegårdens Pas Partout with impressive 943 points. They obtained e.g. 10 for trot and rideabilty and 9.5 for capacity. In addition, Marianne and Shakiro Pilekær made a great performance, placing 4th and scoring 900 points. They also obtained an impressive 10 for walk, and 9.5 for canter and capacity.

Video of the 4-year-old stallion Zonik. We are looking forward to presenting him at the National Stallion Show in Herning.

Helgstrand Dressage has signed a new sponsorship agreement with the company Horse Square for the unique quality products from Carr & Day & Martin. We look forward to the co-operation and are very pleased to use the great products for our horses and equipment.

Helgstrand Dressage has signed a co-operation agreement with Victoria E. Vallentin. Victoria has been riding the pony, the gold medal mare Clair SPR, for a while at Vilhelmsborg, Aarhus. The 6-year-old mare will stay at Vilhelmsborg for further training. The pony has already won several national shows, with scores of 77%. It will be interesting to follow the equipage at future shows.

Video of the 3-year-old stallion Sezuan. He will be presented in Herning at the National Stallion Selection 2012. We are looking very much forward to presenting him in Herning, in the meantime, enjoy the video of this fantastic horse.

UNO Donne Unique has been sold

Lately, she has developed tremendously and now performs even the hardest Grand Prix exercises with a real talent. In future, she will for sure have the potential to rank among the top 3 horses in the world. It might seem peculiar to some people that we choose to sell such a talented horse, however, running a company, which trains and sells horses, sometimes calls for such difficult, but rational decisions. We, of course, wish the new owners Edwin Kohl and Arlette Jasper-Kohl and of course Donna's new rider Patrik Kittel, good luck with her in future. 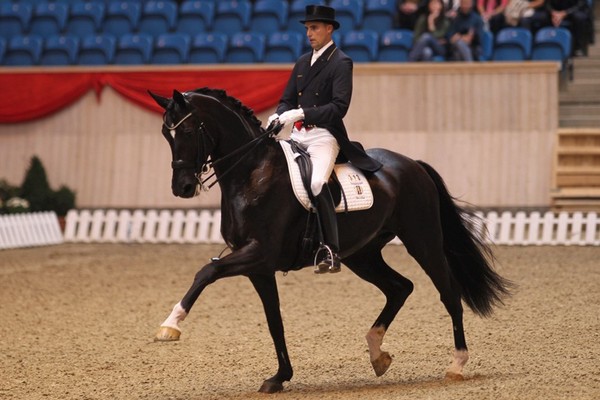 Saturday and Sunday brought good results at the national show in Hjallerup. Marianne and Sitana continued the superior style from Friday, and won MB2 on Saturday with 71.491%. Maik and Welcome placed 6th with a score of 67.456%. In the Grand Prix class, Andreas participated with both Polka Hit Nexen and Laetare. He obtained 70.780% with Polka Hit Nexen and placed 2nd. With Laetare, he obtained a score of 68.582% and placed 4th. Anna also did really well with Fernhill Derry, obtaining 66.312%. In MA2 Saturday night, Andrea and Altair placed 3rd with 70.263%.

In the first class on Sunday, MB3, Maik and Welcome participated once again, this time, they obtained 69.750% and placed 3rd. Andreas and Polka Hit Nexen made a great performance in Grand Prix Special. They finished 2nd again, scoring 70.625%. The last class at the show was Prix St. George, Andrea and Altair participated again, and continued the positive trend from the other days, obtaining 69.561%, enough to finish 4th. Anna and Stall K's Dynamit placed 8th, scoring 67.895%.

Team Helgstrand has had a great start at the first national show this year, In the first class today, MB1, Marianne and the 7-year-old Sitana won comfortably with a score of 71.802%. In MA1, Andrea and the 9-year-old Altair placed second 2, scoring 70.370%. In the last class today, Intermediaire II, Andreas and the 8-year-old Laetare made a great debut. Laetare did really well, and obtained 68.947%, enough to finish third in the class. Classes run all day Saturday, and Team Helgstrand will be represented in all classes.