Bronze for the Danish team at the European Championships

Yesterday, the last two riders had their test in the team competition at the European Championships for U25 riders. Among them were our rider, Søren Wind and Diego. The Danish team delivered four good performances and ended up with a total score of 68,490%.

Today, the individual qualifications for the finale on Sunday is starting. Søren and Diego are doing their test today at 6.42 pm, but it’s first after the last rider completes their test tomorrow evening, we’ll know who’s qualified for the finale.

We, at Helgstrand Dressage, congratulate the Danish riders on the bronze medal.

You can see more about the schedule and results here.

The danish team with the bronze medal 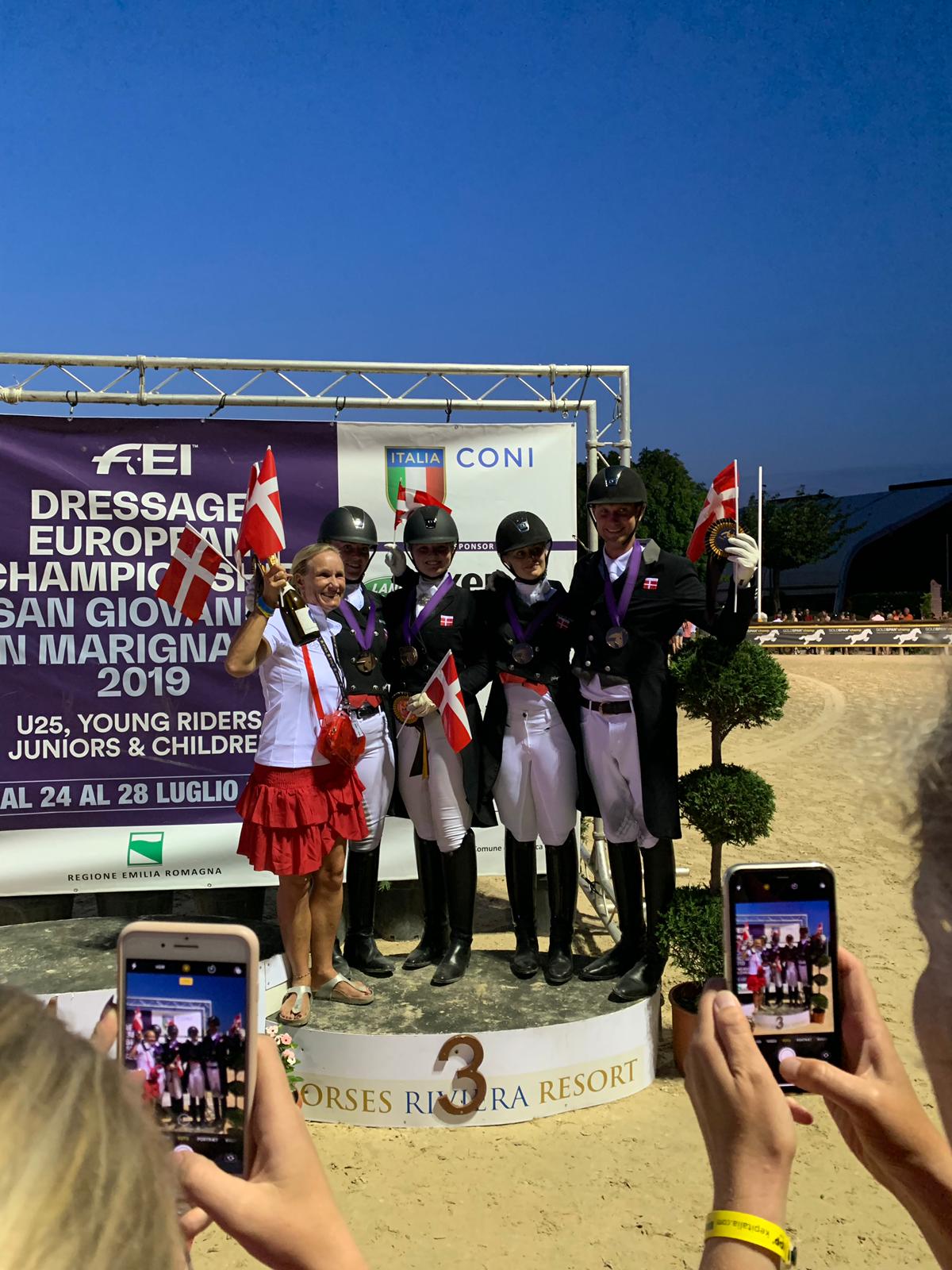 Søren Wind and Diego 471 at the European Championships

This week, Søren and Diego are in Italy, where they’ll be competing in the U25 European Championships for the team and individually.

Tomorrow, Wednesday, the event starts with the team competition, where they’ll be riding Intermediate II. On Friday, the individual competition kicks off with the preliminary round and on Sunday, the qualified riders will be riding their Kür.

Helgstrand Dressage wishes good luck to all the Danish riders.

See the starting list and results for Søren and the other Danish riders here. 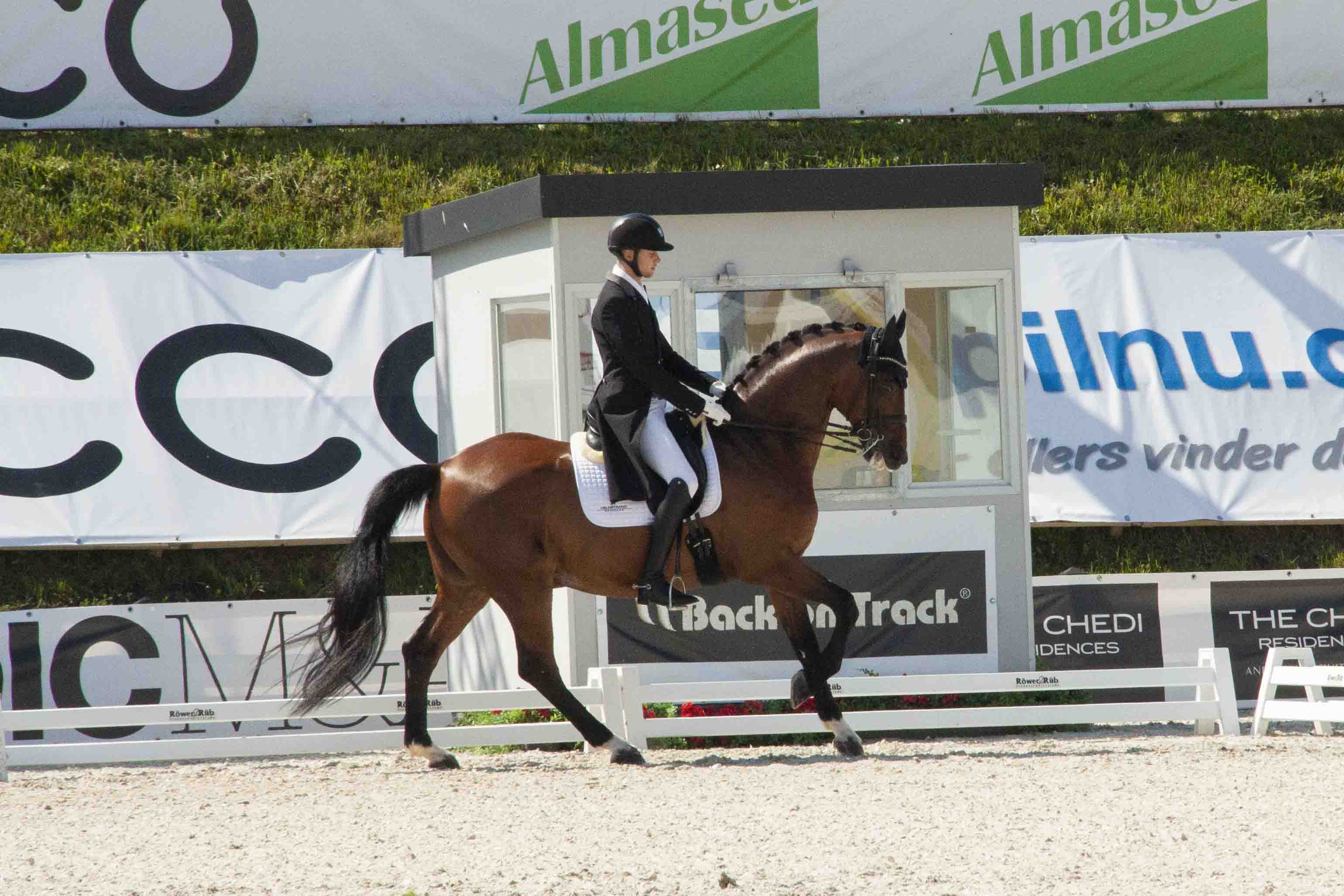 13 horses from Helgstrand Dressage will compete in Ermelo

The qualifications have come to an end and we are proud to announce that 13 horses from Helgstrand Dressage are selected for the WCYH in Ermelo 2019.

It will be an overwhelming collection of top dressage horses that will compete at the WCYH and Helgstrand Dressage is ready with 13 youngsters. Five out of our 13 participating horses are breeding stallions, which are also a part of our stallion collection 2019. Every 13 horses have made fantastic results in the past and we really look forward to seeing the results at the WCYH 2019. 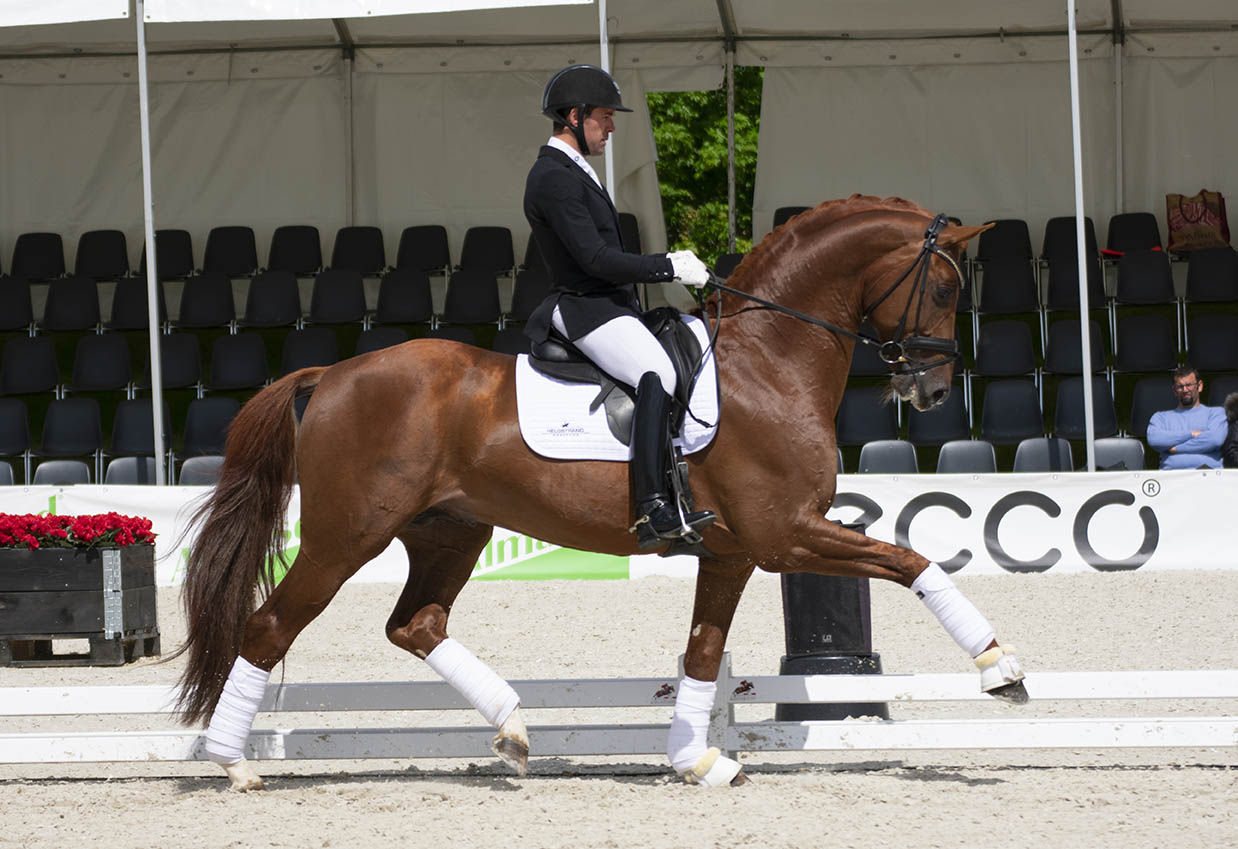 Meike Lang and Icing For U 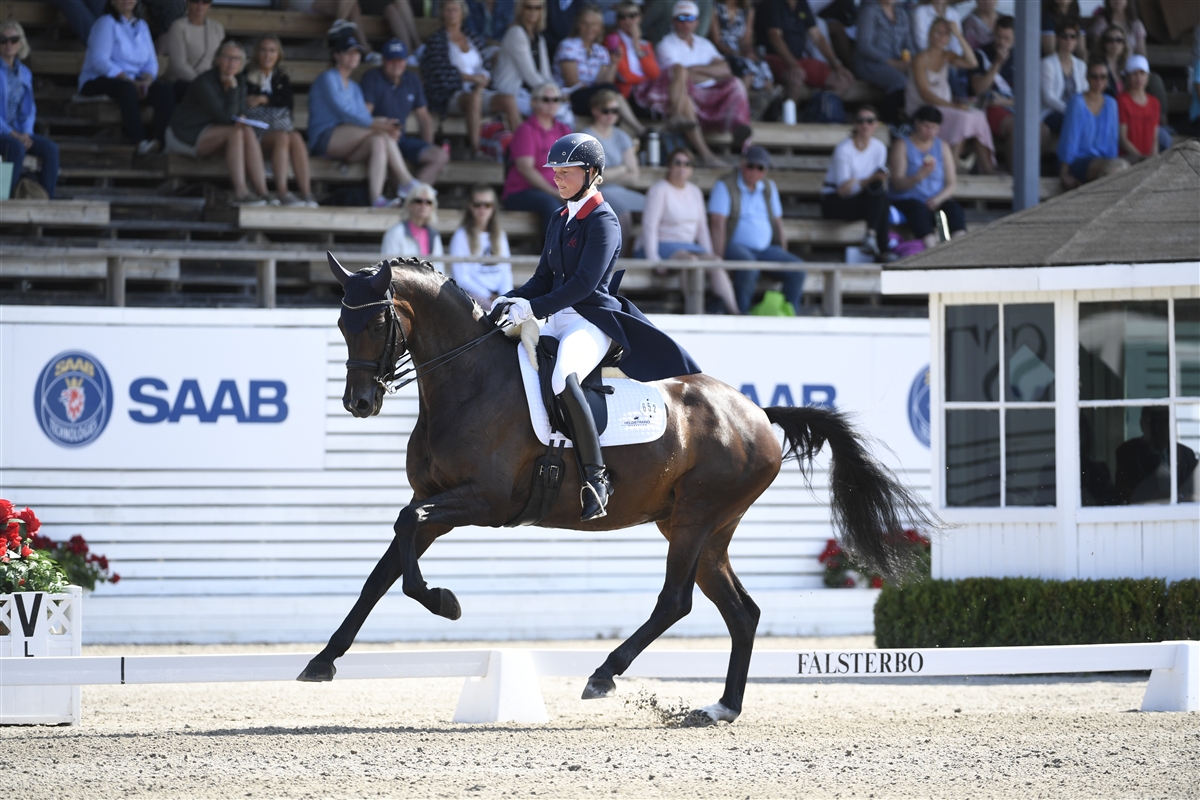 We are happy and proud to announce that in the final qualification in Warendorf, all our riders delivered their best. In the 5-year-olds class, both Espe and Valverde qualified for WCYH with Eva Möller in the saddle. In the 6-year-olds, Andreas and Revolution had an incredible ride and the World Champion for 5-year-olds last year secured his place in this years WCYH. In the 7-year-olds we had Bonderman with his rider Betina and D’avie with his rider Severo – both did very well in the test and were selected for the WCYH, which takes place in Ermelo at the beginning of August.

We are honored to have such great horses here at Helgstrand Dressage, because now we have 11 horses ready for the WCYH, and hopefully a few more on the way. 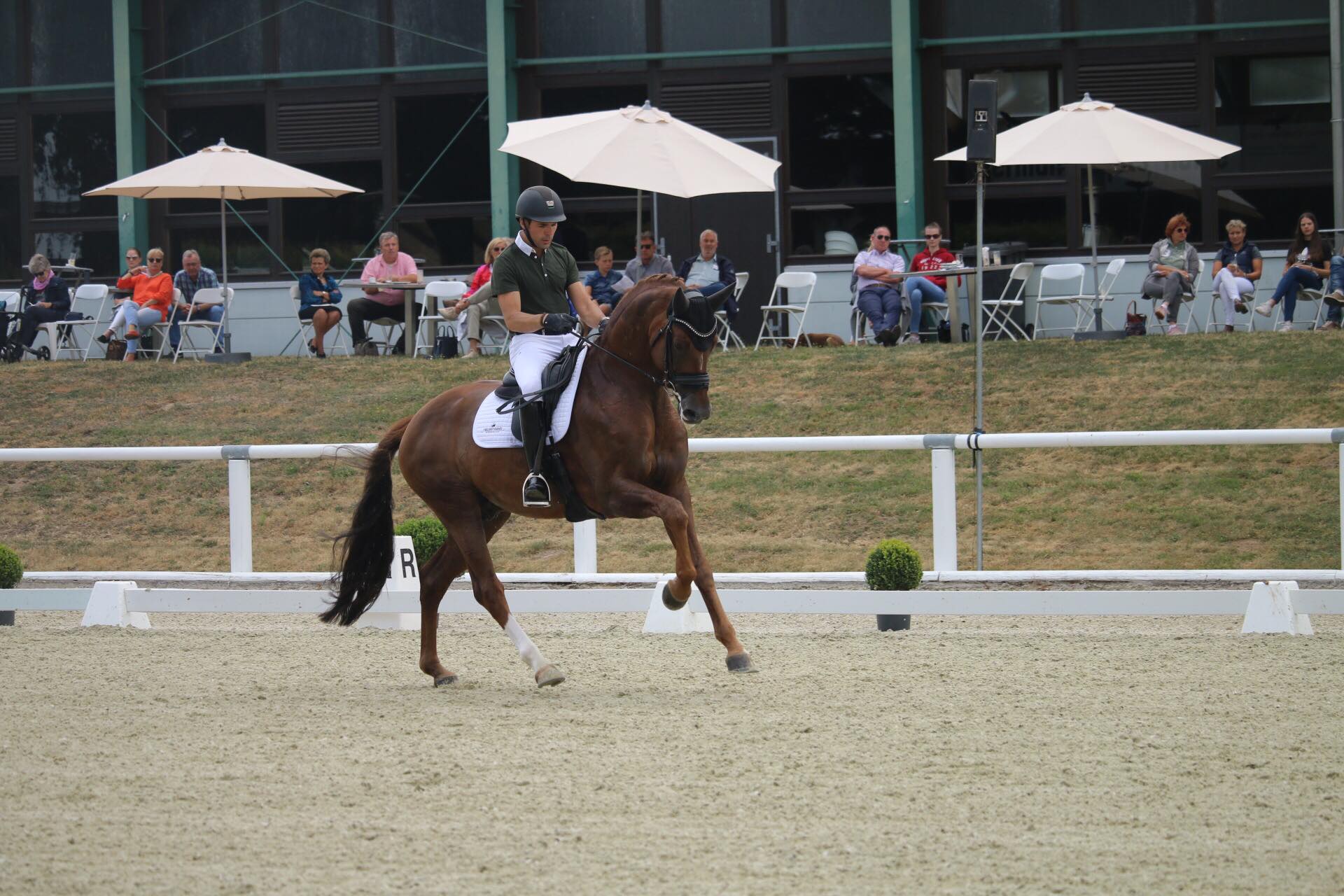 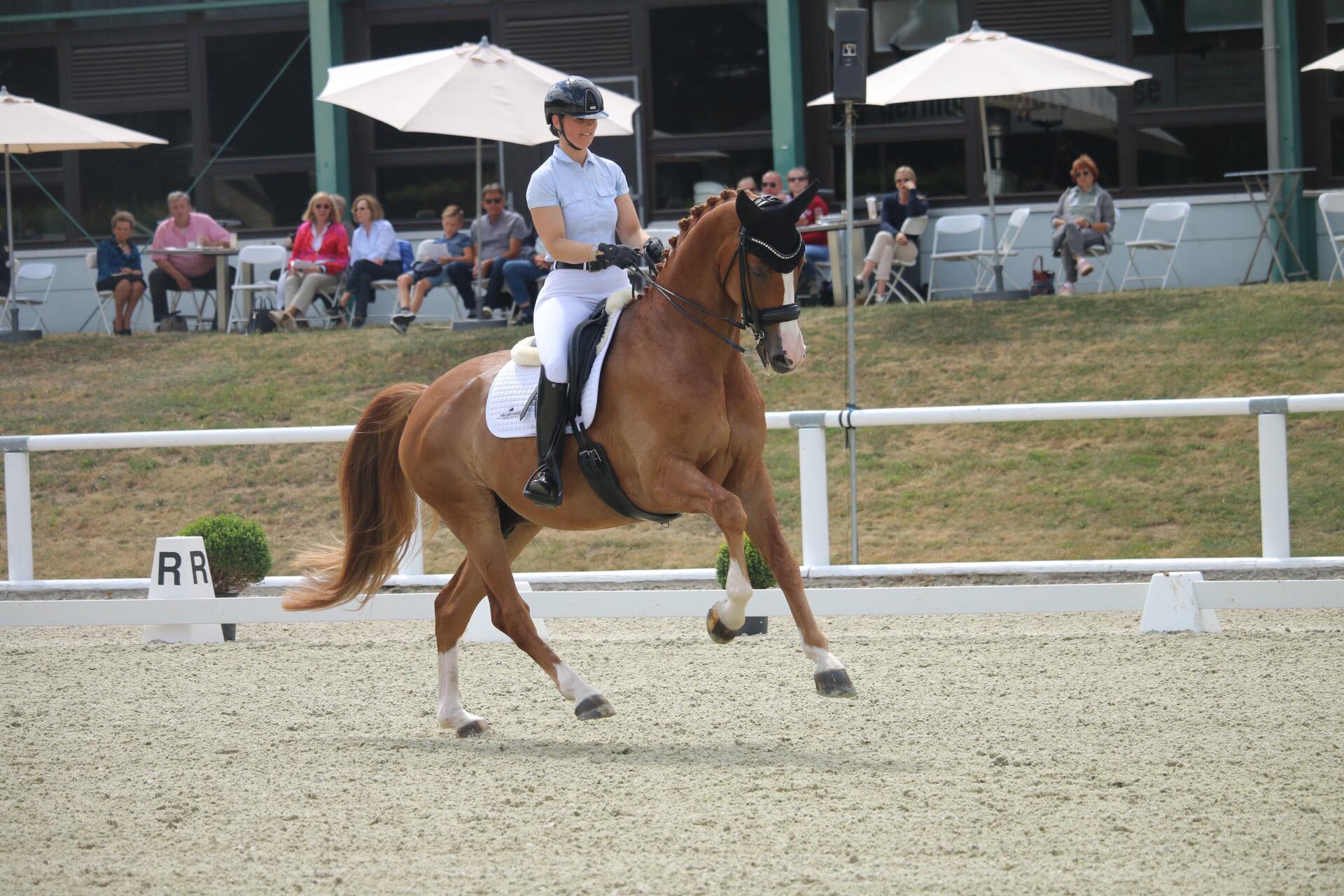 The riders from Helgstrand Dressage excelled at the Nordic Championships 2019

The Nordic Championships 2019 showed world-class riding, were the riders from Helgstrand Dressage gave it everything they had, and once again delivered incredible results

Early Thursday morning, the junior riders were ready for the first round of the team competition, where Alexander Helgstrand and Grevens Sa' Va were amongst the participating riders. The entire team delivered great results in both rounds, and the Danish junior team won the Nordic Championships of 2019. On Sunday in the individual competition, Alexander and Sa’ Va delivered another amazing ride, which resulted in a total score of 76,617% and they won the Nordic Championships of 2019.

In the U25 classes, Victoria Vallentin and Søren Wind were participating with their horses Ludwig Der Sonnenkoenig and Diego 371. Victoria and Ludwig were individually the best equipage in the team competition, with an amazing ride and a total score of 74%. Søren and Diego also delivered a great round in the team competition. Their round got them a total score of 69,974% and was individually placed 3rd. The team had great results from all the riders, and together they won the Nordic Championship of 2019.

In the individual U25 class, Victoria and Ludwig excelled once again, with another amazing ride they impressed the judges and got a total score of 77,235% which secured them the title as Nordic Champions. Søren and Diego also delivered a great ride, which got them a final score of 72,780% and they were placed as number 2 in the individual championships.

Amongst the participants on the senior team were Marianne Helgstrand and Lollipop 126. They delivered a great ride, which resulted in a total score of 69,870% and placed them individually in the class at the 3rd position. The team all did their best and was placed as number 2, only 0,826% after the Swedish team who won. In the individual championship, Marianne and Lollipop delivered another great round and got a final score of 71,650%, which unfortunately put them just outside of the placings, with only 0,135% after the rider placed as number 5.

Here at Helgstrand Dressage, we congratulate all the Danish riders on their great results and placings. 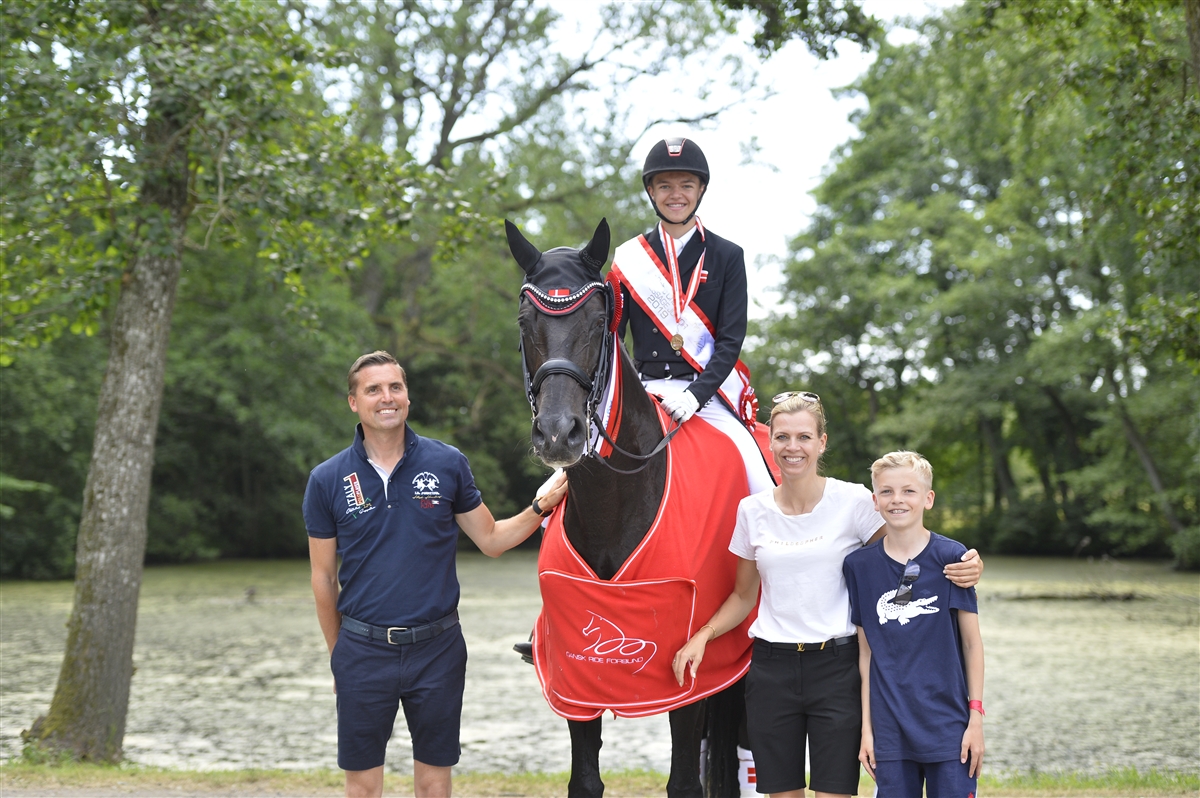 Victoria Vallentin and Søren Wind with the Danish U25 team 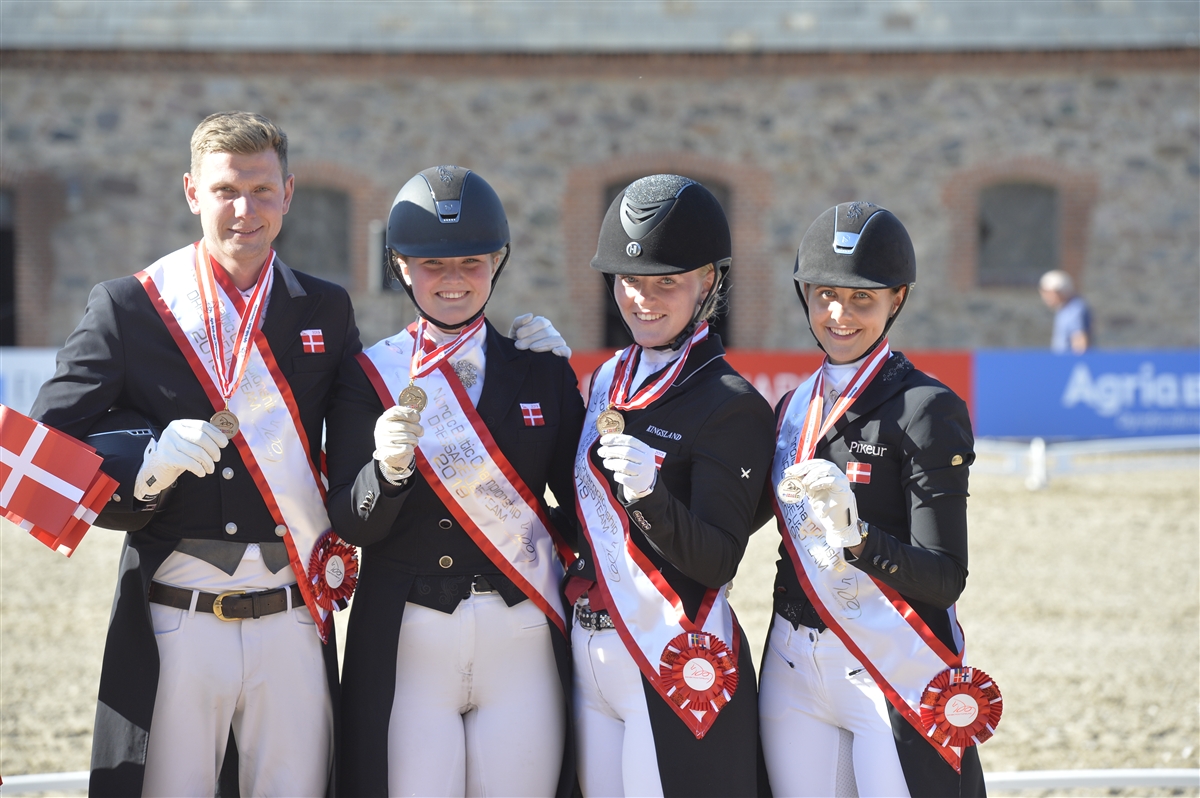 Selection for the WCYH in Ermelo

- I have great expectations for all our young horses who participate this year. It’s always exciting to follow their development and we look forward to showing them at the selections, says Andreas Helgstrand.

In addition to D’Avie and Revolution, Helgstrand Dressage will represent 4 other horses in Germany who also have their first tests in Warendorf. Our much sought-after stallion, Jovian, will have his second selection in the Netherlands next week. 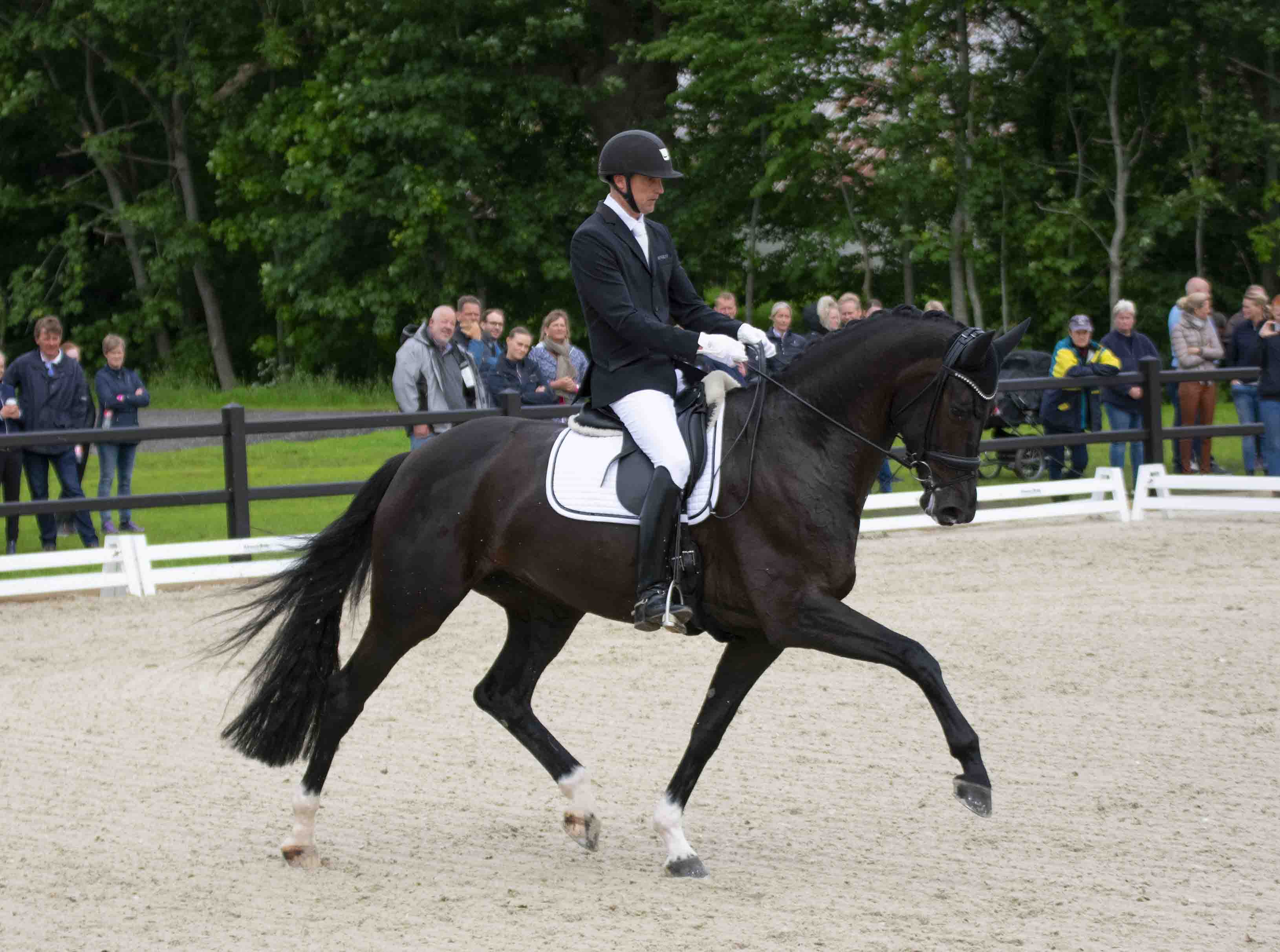 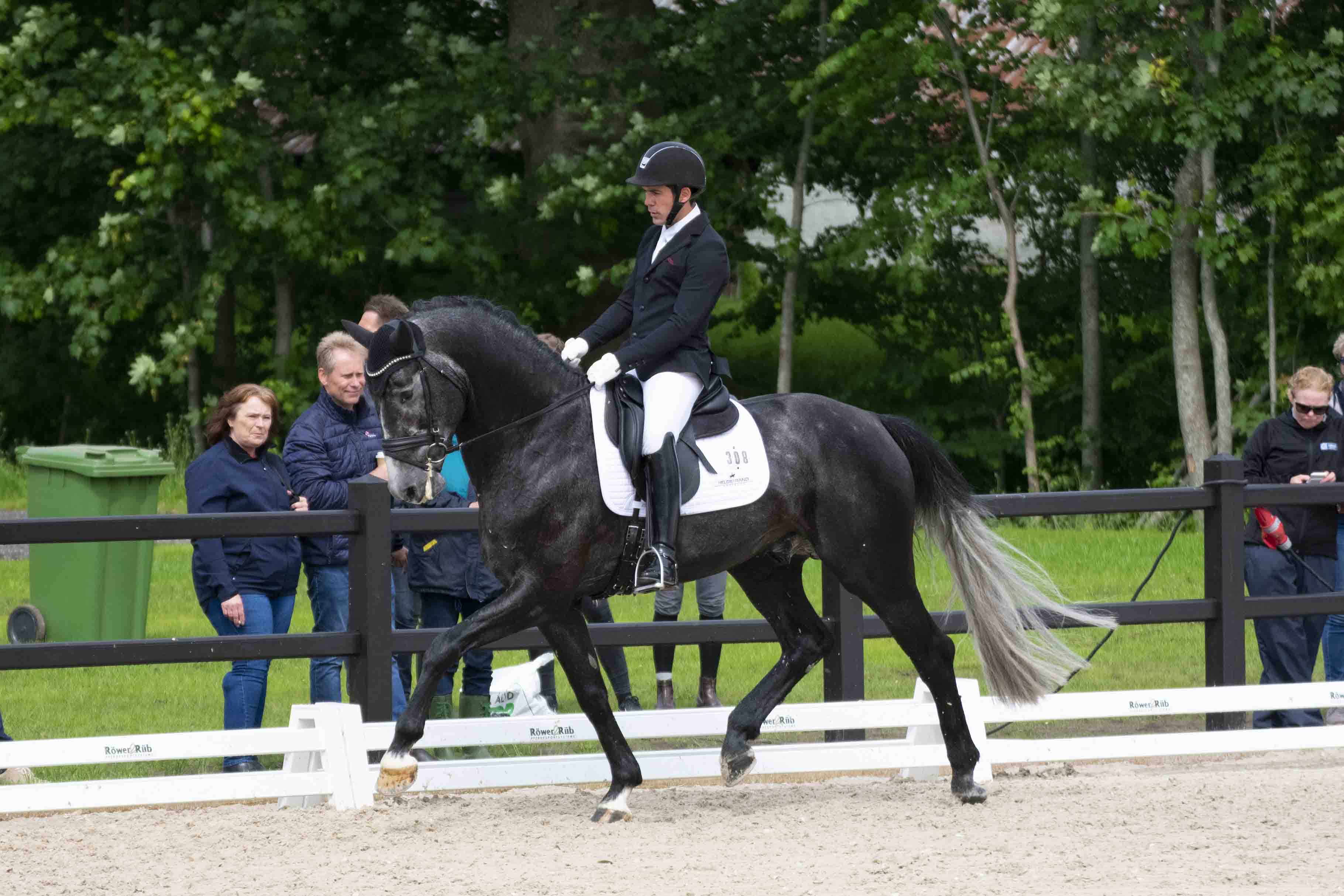 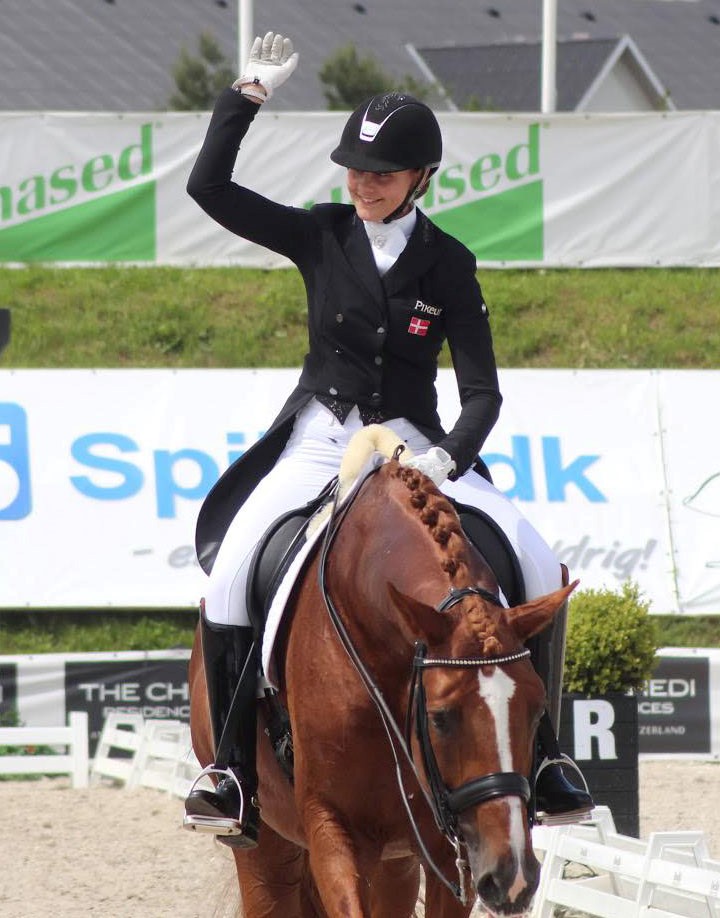 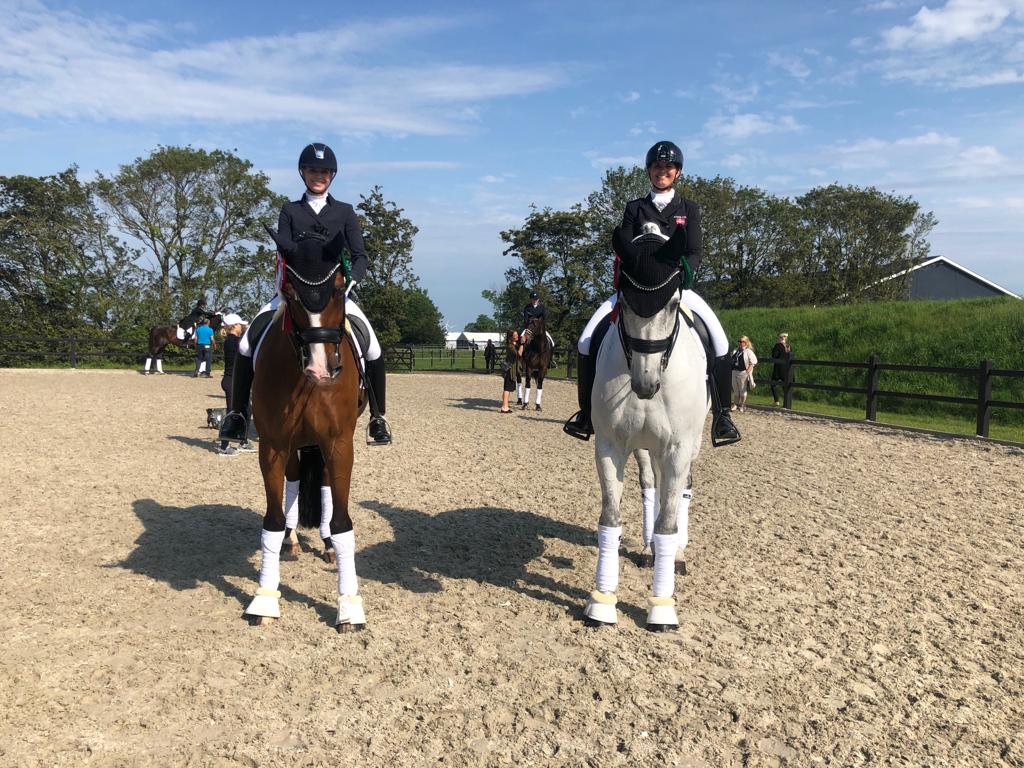 Helgstrand is preparing for the future

Without hesitation, one can safely say, that there has been a quantum leap at Helgstrand in the past years with the employment of large profiles such as Dr. Ulf Möller from Hof Kasselmann and most recently Esben Møller from Blue Hors. Meanwhile, the partnership with the venture capital firm, Waterland Private Equity, has sparked major internal changes, and Helgstrand has recently hired former PwC partner, Marianne Fog Jørgensen, who will be part of the management board as CFO.

When Waterland joined Helgstrand the sails were set for an even stronger Helgstrand with the ambitious goal of creating the world’s leading equestrian business. In that connection, Helgstrand hired Marianne Fog Jørgsensen, who is a former partner in the well-known auditing and consulting company, PricewaterhouseCoopers, or simply PwC. Marianne has a clear advantage as she has been a full-time auditor for the Helgstrand Group for several years and thus has a deep understanding of the company’s business model, processes and value-drivers as well as insight in the company, the industry and the company’s stakeholders. .

- We only want the best and therefore I’m incredibly proud that Marianne chose to accept the position. We have high ambitions for Helgstrand’s future development and I’m sure Marianne has the required skill-set regarding to her many years of experience in business development, management and the operation of a company and last, but not least, her drive to optimize Helgstrand’s market position to unseen heights based on her analytical and strategic skills, says Andreas Helgstrand.

Marianne has a long career in the auditing industry in senior management positions and she has recently been responsible for PwC’s department in Aalborg, where she was responsible for business development and execution of PwC’s strategy in North Jutland as well as optimizing the operation of the company and the use of innovative and effective tools. Competences that she takes to Helgstrand to a great extent.

- Based on my previous job as auditor for Helgstrand I know the structure of the company which gives me a good starting point. I look forward to getting to know people at Helgstrand and getting an understanding of the daily processes in order to be able to further develop and optimize the business processes and at the same time get the value creation in the Helgstrand Group visible. Andreas has managed to build an international brand with a strong market position which I have great respect for. I look forward to becoming a part of this journey together with Helgstrand and Waterland, says Marianne Fog Jørgensen. 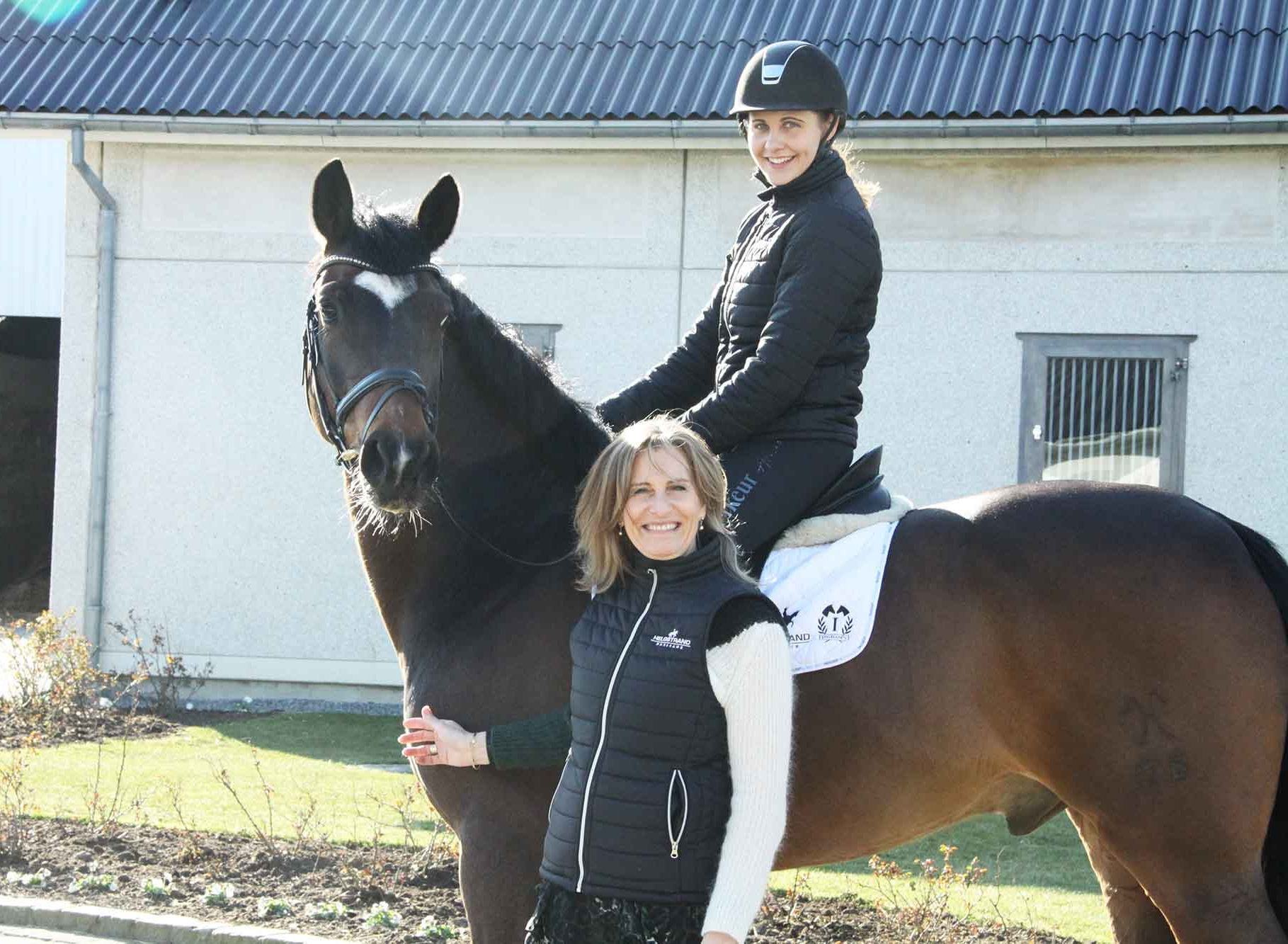 At the 2019 Oldenburg Saddle Licensing in Vechta, the large-framed and strong-moving Champion Stallion Fynch Hatton by Formel Eins/Sir Donnerhall I/Weltmeyer was bought by Helgstrand Dressage at the following auction.

The Champion Stallion achieved the maximum score 10 by the test rider, Beatrice Buchwald. At the following auction, the stallion was sold to Helgstrand Dressage for 260,000 euro. 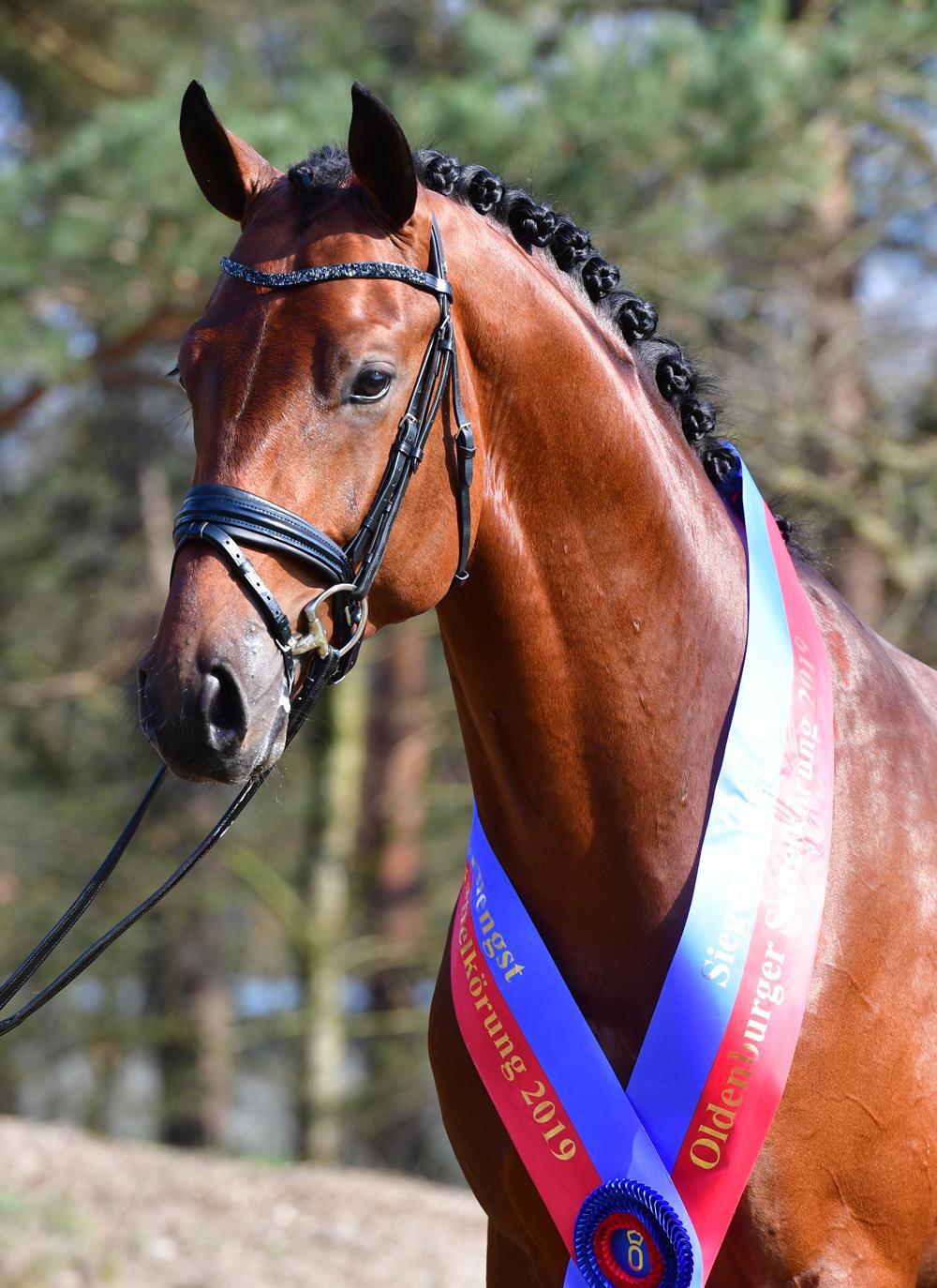 The two stallions have so far been available at Platinum Stable in Holland, but now they move to Helgstrand Dressage.

- They are two very successful horses and we are looking forward to continue their education at Helgstrand Dressage. Eye Catcher is trained by Kirsten Brouwer, with whom the stallion has claimed two times bronze at the WBFSH and in 2017 they had their debut in small tour with great success before she gave the reins to Inna Logutenkova, who has further trained the stallion to Grand Prix, says Andreas Helgstrand.

In addition to Eye Catcher, Helgstrand Dressage has also acquired Five Star from Titan Wilaras, who has also had great success at the WBFSH. 2015 they placed 5 and the following year they claimed silver. Since then, Kirsten Brouwer has continued the training of the stallion.