Today, the presentation class for 4- and 5-year-old stallions took place. The judges commented on the stallions and subsequently, they announced the grades. Vincent Maranello and Andreas were part of the first team in this class. Vincent Maranello made a convincing presentation and impressed the judges with his huge capacity in all 3 gaits and also, his rideability. The equipage obtained the following marks. Trot: 9.5, walk: 9.0, canter: 9.5 rideability: 9.5 and capacity 9.5. Vincent Maranello and Andreas were the equipage with the best and highest marks in the class.

Danciano and Franklin were also presented in this class by Daniel and Emma, respectively. They both made fine presentations in front of the judges and audience.

Below you will see Vincent Maranello and Andreas from today's class.

Young stallions off to a good start

Today, all the young stallions were shown on hard surface in front of the judges. All the stallions made an excellent presentation, showing great form. Tomorrow morning, the 3-year-old stallions and the 4-year-old stallion, Zermillo, will be shown in lunge line.

Severo and Hot Shot W are among the participants in the championship for young horses. Today, all the riders rode the FEI-programme for 5-year-olds in front of the judges. Severo and Hot Shot W made an excellent performance and received great points. In fact, Severo and Hot Shot W were the only equipage in the class to receive a "10" from the judges. They obtained 10 for trot, 9.0 for canter and 9.5 for capacity, thus finishing with a total result of 548 points. On Sunday, test rider Carl Hester will test Hot Shot W, and we are, of course, very excited, but hoping for the best.

See you in Herning

Finally! It is now time to pack and head for the annual stallion show in Herning. We are actually already on our way with most of the horses. This year, we have 11 stallions, one horse in the championship for young horses and two horses in the gala show. We look forward presenting all the horses and hope for some good results.

Please stop by our stable, if you would like to see our horses or have a chat about stallion choice. 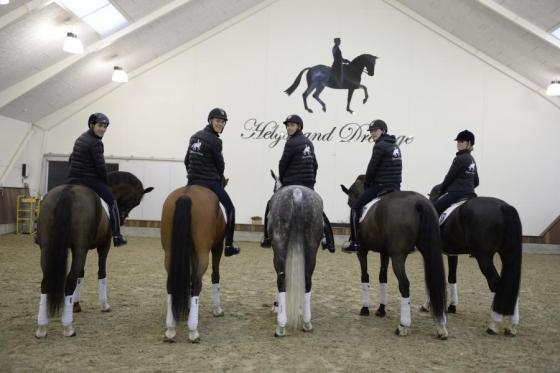 Sezuan has been sold

Sezuan, our best and most outstanding stallion so far, has been sold. Gestüt Peterhof has bought the other half of Sezuan and now owns him 100%.

It was obvious from the beginning that Sezuan was an exceptional horse. In 2012, he was licensed in Danish Warmblood; and he broke all records in the history of Danish Warmblood when he obtained ten 10's and finished with a total result of 987.50 points at the 35-day test. When he was 4 years old, he became champion stallion in Danish Warmblood, and later that year he finished as the unmatched winner of DRF’s dressage championship for 4-year-olds. We were already starting to look forward to having Andreas and Sezuan representing Denmark at this summer's WCYH for 5-year-old horses in Verden. Instead, we are now hoping to see him in Verden with his new rider.

Sezuan took the long trip down south to Gestüt Peterhof and Arletta Jasper Kohl and Edwin Kohl last Tuesday together with his regular groom, Mikkala Krogh. He has now been installed in his new surroundings. We will for sure miss him here at Møgelmosegaard, where he has had the same stall ever since he was a colt. We wish his new owners, Gestüt Peterhof, the best of luck with Sezuan in future. Below you will see a video from Sezuan's last training at Møgelmosegaard.

Herning is just around the corner

Everyone at Helgstrand Dressage is very busy at the moment, preparing the young stallions for Danish Warmblood's annual stallion show. All the young stallions have had a relaxing weekend, out in the fields and in the walking machine in order to prepare them for the challenges awaiting them in Herning at the end of the week.

Last week, we made videos of the two 3-year-old stallions: Goldfinger og Galaxy Win T. They are both very young and inexperienced under rider, and they have actually only been ridden approx. 5-6 times so far.

Below you will see Goldfinger by Jazz and with Ferro as dam sire. He has already been approved in the German Oldenburger Verband.

This is Galaxy Win T., who was approved recently at the KWPN licensing in Holland. Galaxy Win T. is by Apache and with Jazz as dam sire.

Benn and Severo in top in Grand Prix

Last Saturday, Benn and Severo started the Grand Prix at the national show in Sundeved. It went really well for both of them; Benn and Finnaly won the class with 68.13%, Severo and N.O.H's Daijoubo placed second with a score of 67.20%.

Hat-trick to Thomas and Angrib in Norway

This week, the CDI 3* show in Vestfold in Norway takes place. Thomas and Angrib Firfod are participating in the show. Last night, they had their international debut in Grand Prix. A great performance resulted in a score of 70.74%, and victory in the class.

Thomas and Angrib Firfod will start the Grand Prix Special tonight; we will, of course, keep our fingers crossed for a good result.