The stallion had just arrived at Helgstrand Dressage few days before the annual Open House, and therefore it was a great experience for the only 3-year-old stallion, Milione, who entered the arena with great energy, while the audience watched with excitement.

The 3-year-old stallion is by Millennium and with damsire Lord Loxley. The recognized stallion Millennium is a very modern type with good rhythmical gaits and a good up-hill tendency – gaits, that Milione has inherited.

Millennium was second Reservesieger at the 2010 Trakehner Licensing in Neumünster and won the 2013 70-day test in Neustadt Dosse with a total score of 8,66. Millennium, along with Kay Pawlowska won silver at the German Trakehner championat in Hanover.

With that in mind, we are expecting the young stallion to have a very promising future. 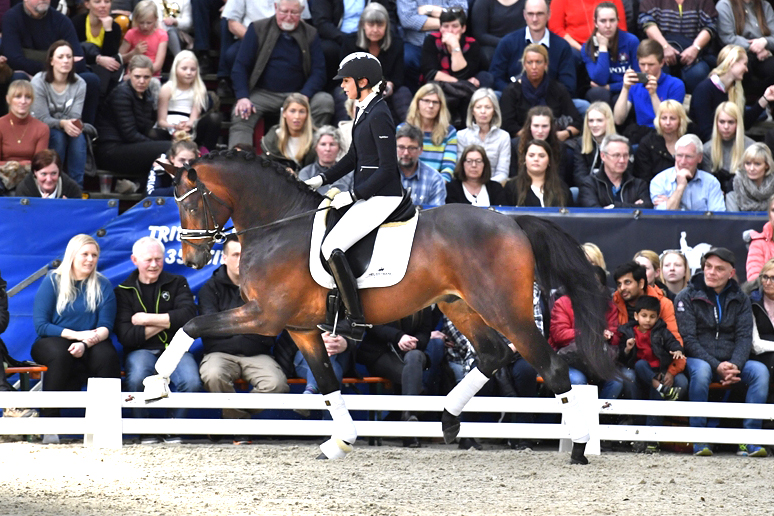 At Helgstrand Academy we are now ready to present our next event: 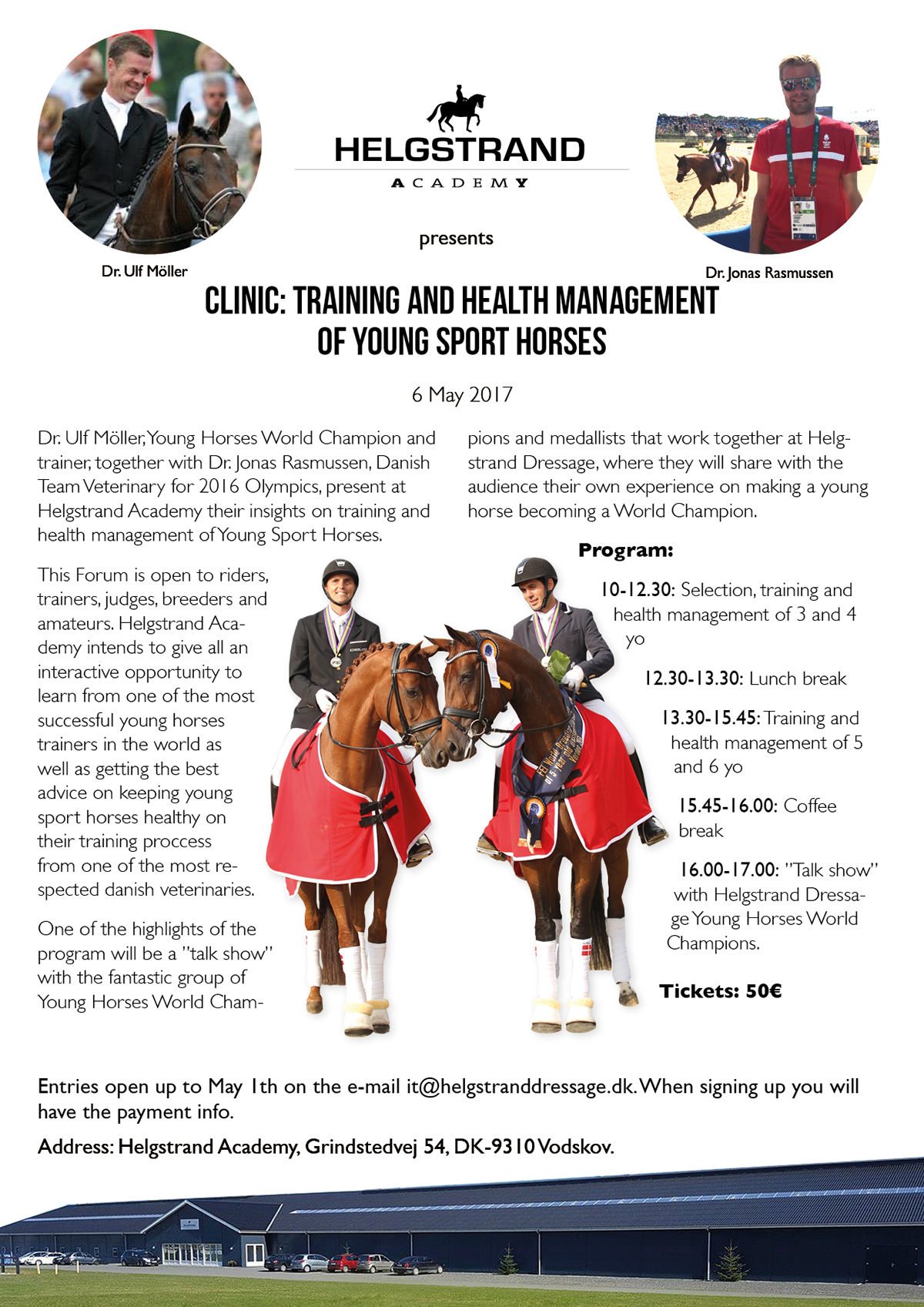 For this year's stallion licensing at the Herning Horse Show, seven 3-year-old stallions from Helgstrand were approved for testing and went through to the Danish Warmblood´s 10-day observation test, which was done by Torben Frandsen in Tørring at Randers, Denmark.

Although the stallions had just finished their presentation in Herning, they all had lots of energy and were ready to prove their worth in Tørring, where their temperament and rideability were tested.

The stallions are ready for breeding this season, but must go through a 35-day test to obtain final approval for breeding in Danish Warmblood.

The seven stallions from Helgstrand Dressage, which were tested in Tørring were: 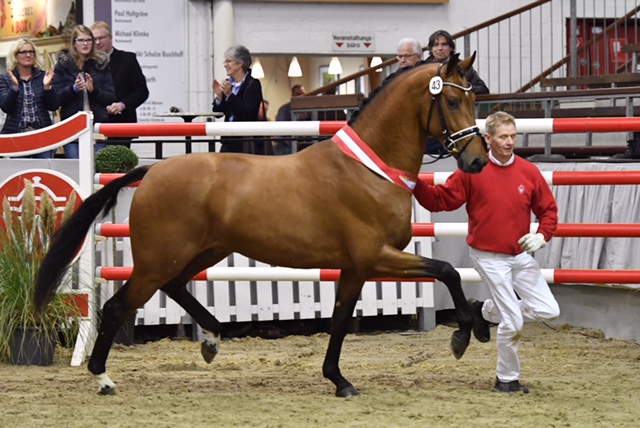 Impressive results at this year's Stallion Show in Herning

At the first day at Herning Horse Show the young horses were the first to show in the arena, and although it was a bit overwhelming with the many impressions, all the horses were successful. Both Kenneth and Santos and Betina and Zancor achieved 159 points and got a 3. place, while Kenneth and Wyatt Earp got a 5. place with 156 points.

Thursday the 3-years stallions were shown by hand for the licensing commission. Thursday also the Championship for young horses took place, and the test included program riding. Betina and Zancor did a great job and scored a total of 375, with 9.5 for canter and 9 for trot, rideability and capacity. Kenneth and Wyatt Earp was ranked no. 4 with 349 points. Thursday in the Prix St. George, Betina and Quarton achived no less than 71.8% and got an impressive 3rd place. On Thursday afternoon, the 4-years stallions were showcasing their gaits and every stallion was showing great surplus energy. Especially Revolution with Andreas in the saddle got the audience to gape.

Competition between Severo and Dorothee Schneider

Friday started out with a presentation class where the stallions showed exercises based on their individual level, while Bjarne Nielsen was commenting.

Many had got up early to see the stallion's development. After the presentation class, Grand Prix went on. Severo achived the 2nd and 3rd place with respectively 75% on Deep Impact and 72.96% on Dragao. Thomas and Don Tignanello also had a great program, which the judges rewarded with 70.58%. After the Grand Prix class, the 3-years stallion were showed free in the arena for the licensing commission.

On Saturday, the 3-years stallions were shown in lungeing reins for the licensing commission with following evaluation. We were obviously very excited about the results and are pleased to say that following six stallions proceed to test:

After evaluation of the stallions the Intermediare I went on and Betina and Quarton went to start. The pair continued Friday's success and ended in the top after a great program, which the judges rewarded with impressive 74.42%. The "older" stallions were back in the arena in the presentation class where Bjarne Nielsen commented from the sidelines. The seats were filled around the arena and big applause followed when the handsome stallions showed their impressive gaits and amazing temperament. In Saturday's championship class with test rider Kenneth and Santos had a top presentation and got no less than 8.5 for rideability and 9 in capacity and thus a total score of no less than 350.

Revolution as stallion champion and Springbank II as premium stallion

Sunday ended with the Grand Prix Freestyle where Severo and Deep Impact won with amazingly 79.05%, beating Dorothee Schneider on Sammy Davis Jr. Betina and Very Keen ended up on a 5th place with 72.1%.

A fantastic Stallion Show is over, and we would like to thank all Helgstrand riders and grooms for the great work. Once again, we have proven that we are a great team. 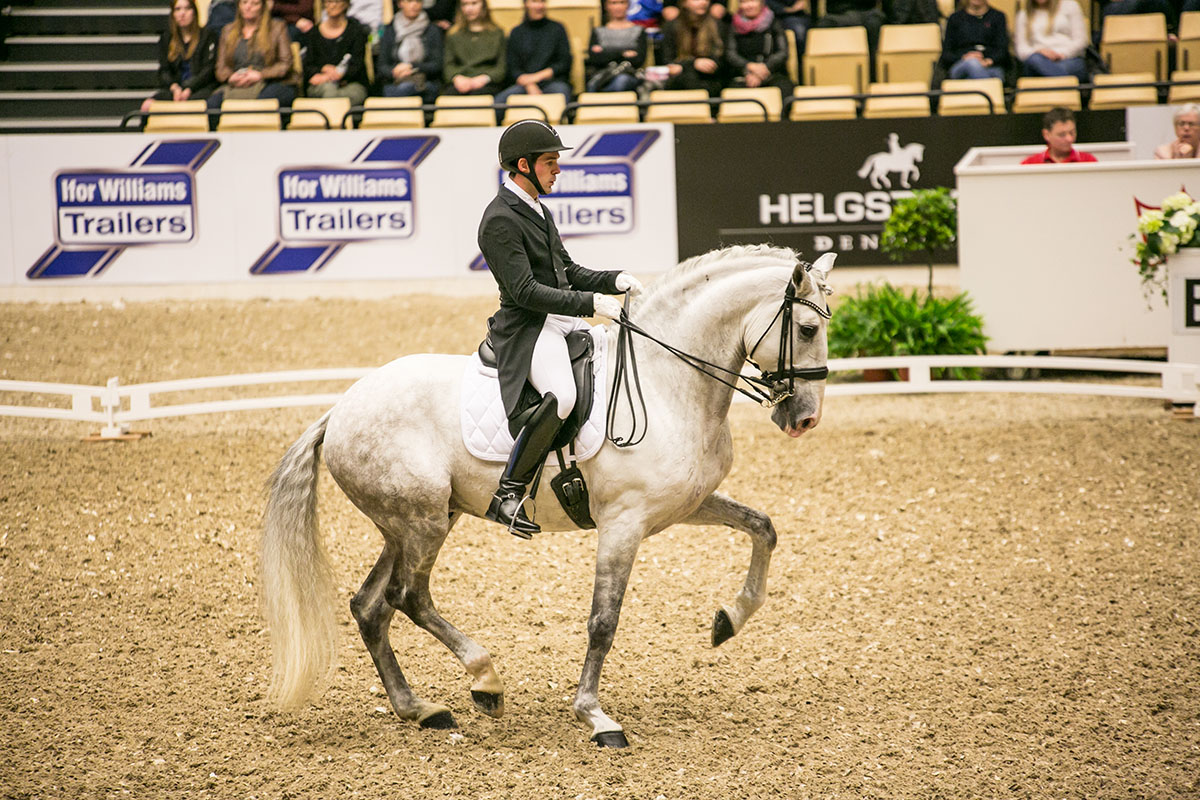 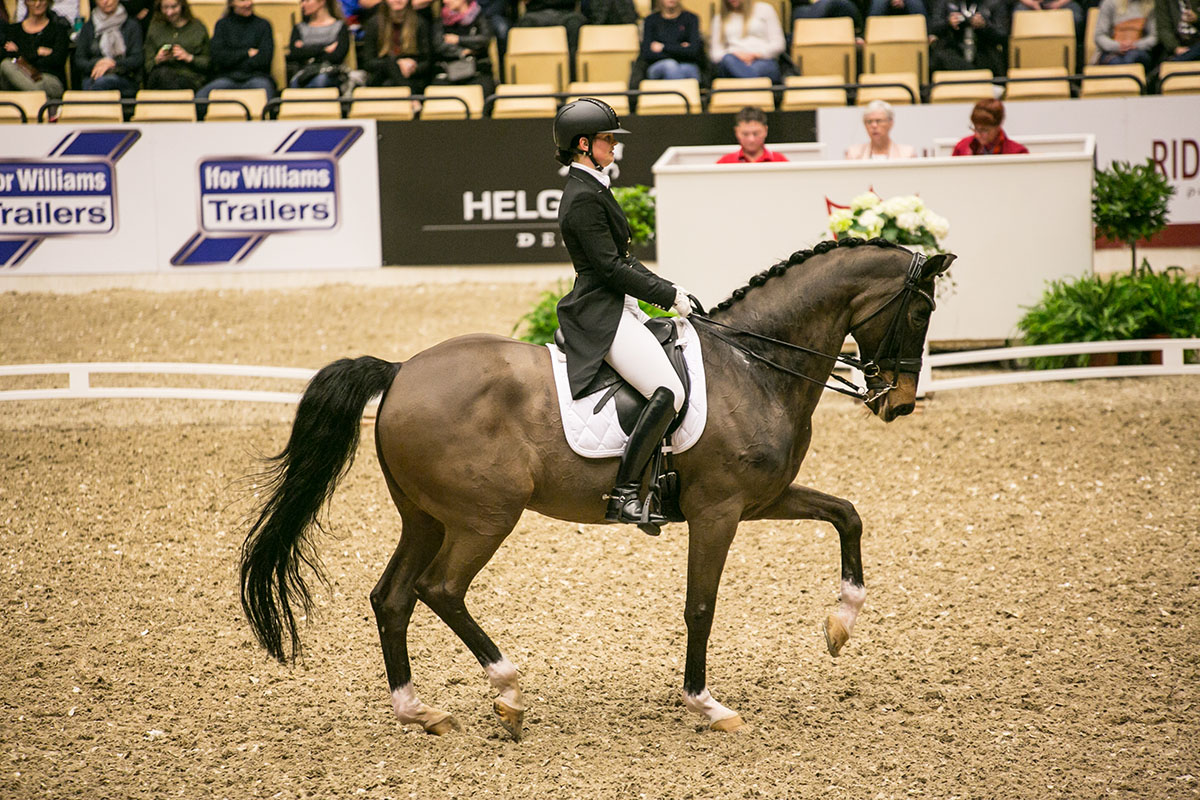 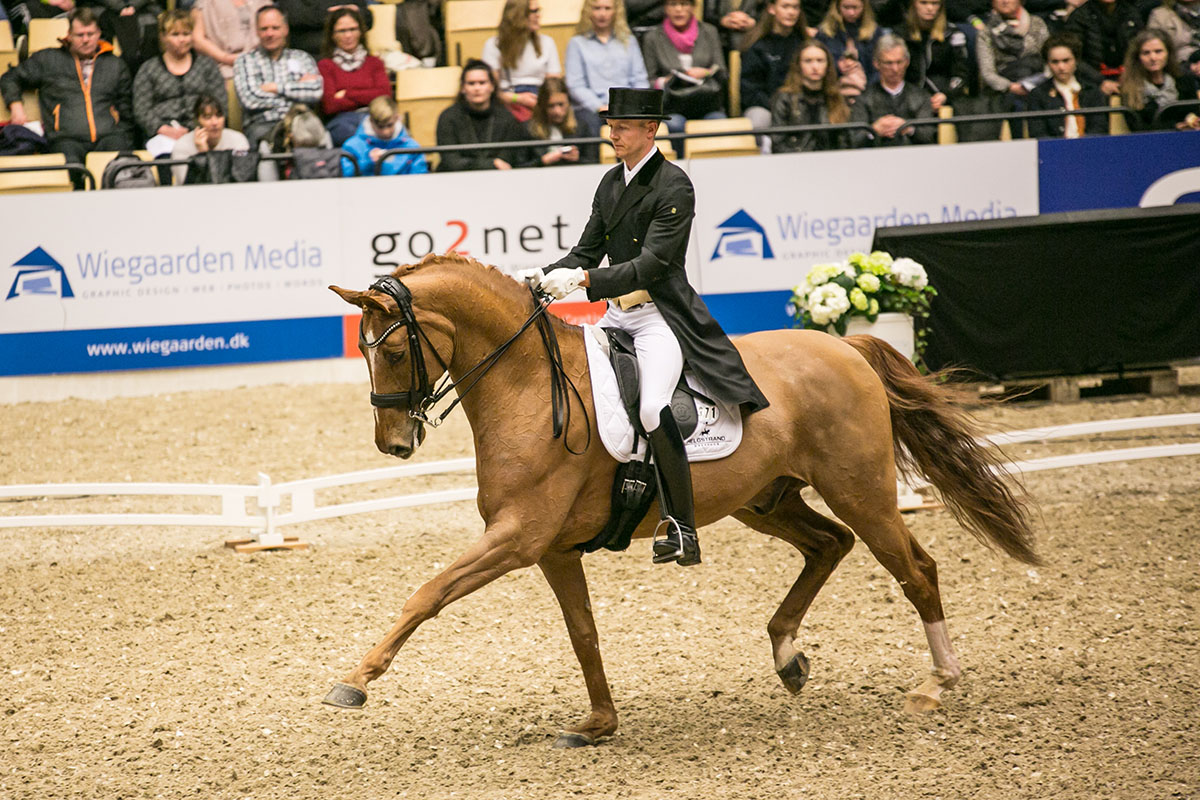 The two 3-year stallions showed fantastic capacity and energy at the auction, where especially the desired stallion by Sezuan made a big impression. Grandmother of the stallion is full sister to Isabell Werth's previous successful dressage horse, Ferrara S, who was also Bundeschampion in 1966. A largely framed stallion, who measures 176.

In addition, the 3-year stallion by Quatergold, whose mother is full sister to the former UVM-Gold winner, Poetin. This stallion measures 169.

Regularly new exciting stallion are bought to the collection and with this purchase the season 2017 seems very bright for Helgstrand Dressage. 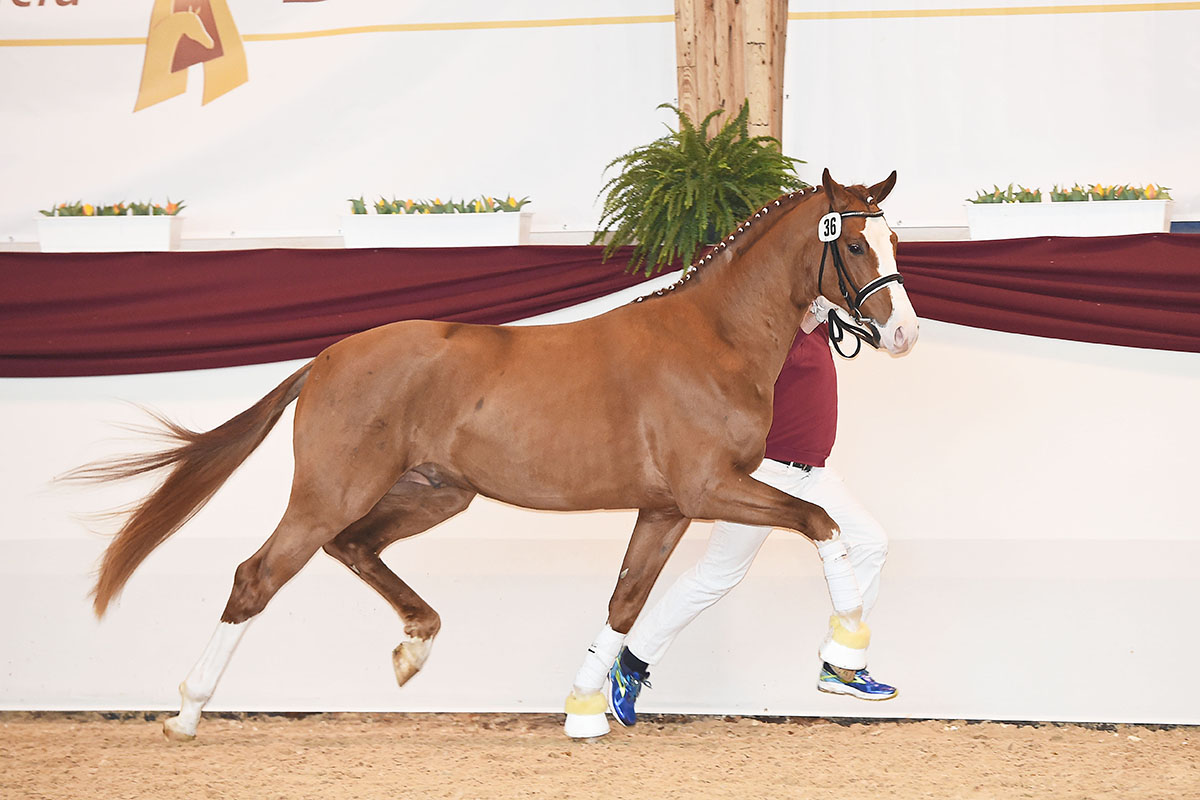 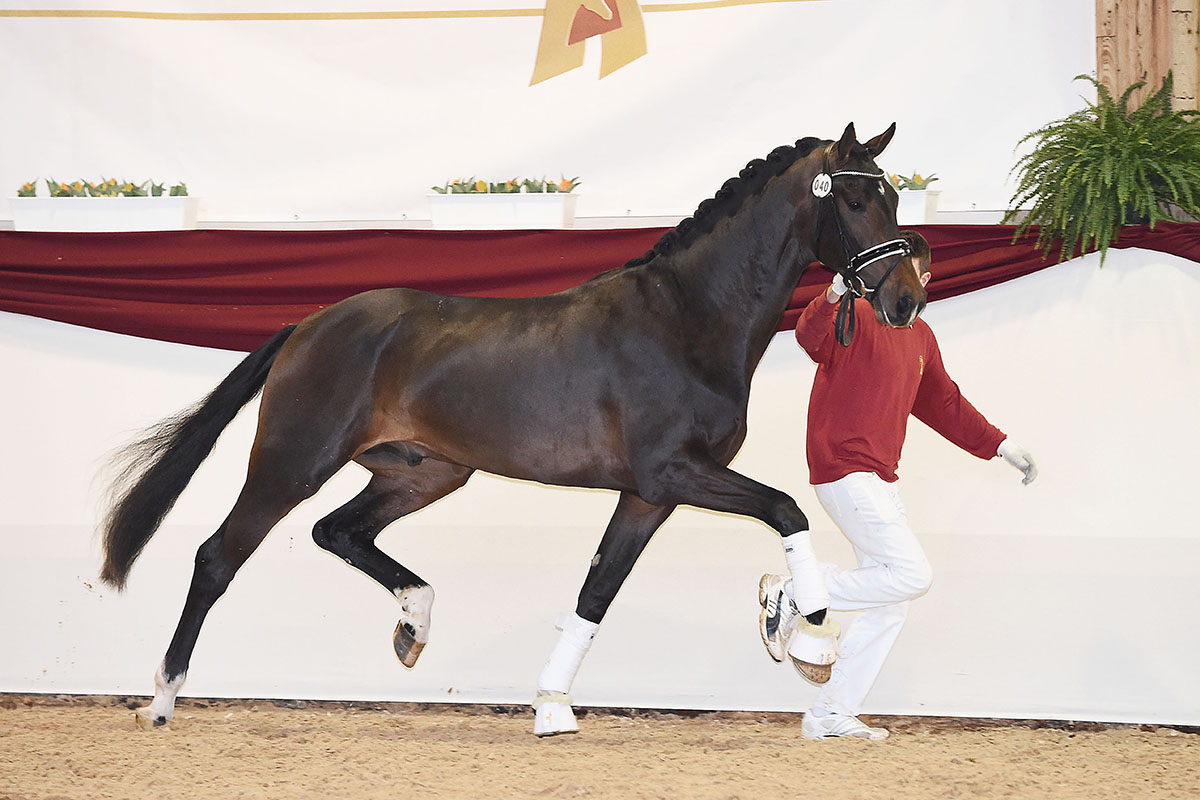 Helgstrand Dressage keeps on growing and we are now happy to present you our new stable Helgstrand Academy.

Helgstrand Academy's facilities include stabling for about 100 horses, indoor and outdoor arenas and a veterinary clinic. This is soon to become a location for international competition events, hosting Equitour Aalborg this spring. Besides being a home for Helgstrand Dressage's horses and youngsters, the Academy includes boarding of privat horses in training, a riding school (Uggerhalne Sportsrideklub) and a riding physiotherapy center (Nordjysk Center for Ridefysioterapi & Handicapridning).

We are preparing a series of educational events at Helgstrand Academy starting in February with a Dressage Forum with the FEI5* judges Mariette Withages and Susanne Baarup and more is about to come. 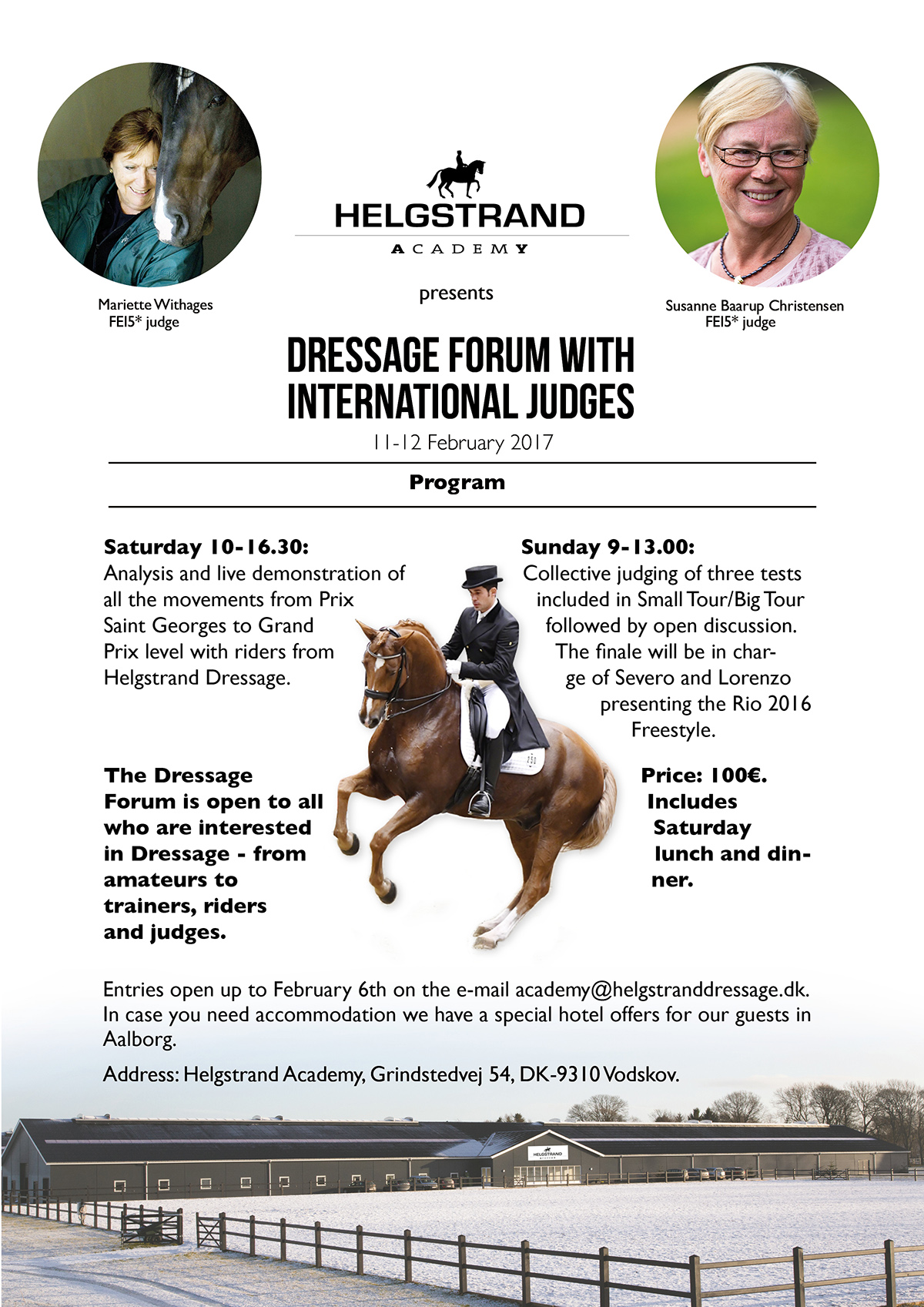 - We have managed to turn Helgstrand Dressage as a recognized training center for top dressage horses in most of Europe, but there is still a huge potential in other parts of the world, including the USA. Until now we have not had the resources necessary to start a sales stable in the USA, but after having reached an agreement with Dr. Ulf Möller, we can now take Helgstrand Dressage to the next level, says Andreas Helgstrand proud.

Experience and many victories
Dr. Ulf Möller is a trained veterinarian and has many years of experience in the training of dressage horses. In his career, Ulf has been an auction rider in the Hannoverian marketplace in Verden and has been working as a sales manager for the auction alongside his riding career, where he has achieved many victories. Since 1998 he has been a part of Hof Kasselmann & Performance Sales International, where he worked as a sales manager. Both at the national and international scene, Ulf has made his name and many remembers, when he became World Champion with Sandro Hit back in 1999 and World Champion with Don Davidoff in 2002. In addition his riding career counts 7 times Bundeschampion for young horses in Germany and a whole range of victories up to class S.

Among many ideas a new sales stable in the USA
- In the American state, Florida shows are almost taking place every day for the first 4 months of the year. Wellington is described as an equestrian Mecca where top dressage riders each time fine-tune their competition form and seek to create good results. We have many new ideas and one of them is our desire to establish a sales stable in the USA. With Ulf's years of experience and through the network that he has built up by traveling around the world, we are obviously extremely excited about the cooperation. We are so proud that Ulf has chosen to work for us and we look forward to his start at the beginning of the new year, says Andreas.

- Ulf Möller is married to Eva Möller, who is also a very experienced dressage rider with many top victories during the years, among others winning the German Bundeschampionship several times including two times World Champion for Young Horses. We are very excited about Eva also is joining the team and having another experienced dressage rider at Helgstrand Dressage. We want to expand Helgstrand Dressage and make our brand even more well-known on the international stage, and we are confident that the cooperation with Ulf and Eva can help making our wish come true.

- In addition starting up a sales stable in the USA Ulf is also going to help spot the good dressage horses around the world. We believe that Ulf is the right person to take Helgstrand Dressage to the next level.

Ulf has been really happy with his job at Hof Kasselmann, and it has been a very hard decision leaving the Family Kasselmann. Ulf and Eva continues to stay in Germany.

The expectations were high as the guests began entering at yesterday's VIP Christmas Event at Helgstrand Dressage, where a prensentation of the promising young stallions for next season where going to take place.

The arena was decorated with fir, lights and Christmas trees, and the guests were greeted by a lovely scent of gløgg and æbleskiver (Danish doughnuts). At seven o'clock started the show and Andreas and Marianne welcomed the 200 guests.

The young 2-year-old stallions were shown on a long line and afterwards by hand being led, so the audience really could get a view of the enormous capacity of the stallions. The 3-year-old stallions were shown under saddle and despite the fact that many of the young stallions had only been in the stable a short time and the arena was a bit overwhelming with many people and Christmas decorations, they took it very well.

Andreas told with great enthusiasm about the exciting pedigrees and the results that the young stallions had already achieved.

Here we have gathered some short presentations of the young stallions.

At this year's Hanoverian Stallion Licensing in Verden six dressage horses were selected as premium stallions, and the highlight of the day - the only 2-year Quantensprung offspring - is now soon to be found in the stable at Helgstrand Dressage.

The newly bought stallion is 2 years old and after Quantensprung with Stedinger as damsire. The stallion has a great expression and combined with a modern look and amazing gaits, we are confident that he will do well here at Helgstrand Dressage. Helgstrand Dressage has bought the stallion together with Søren Grønborg.

The judges at this year's Hanoverian Stallion licensing had a clear preference for offsprings by the Hanoverian stallion Quantensprung, where four out of five were licseensed - and three of them received the title premium stallion.

Are you interested in seeing a clip of the impressive stallion, you find it here. 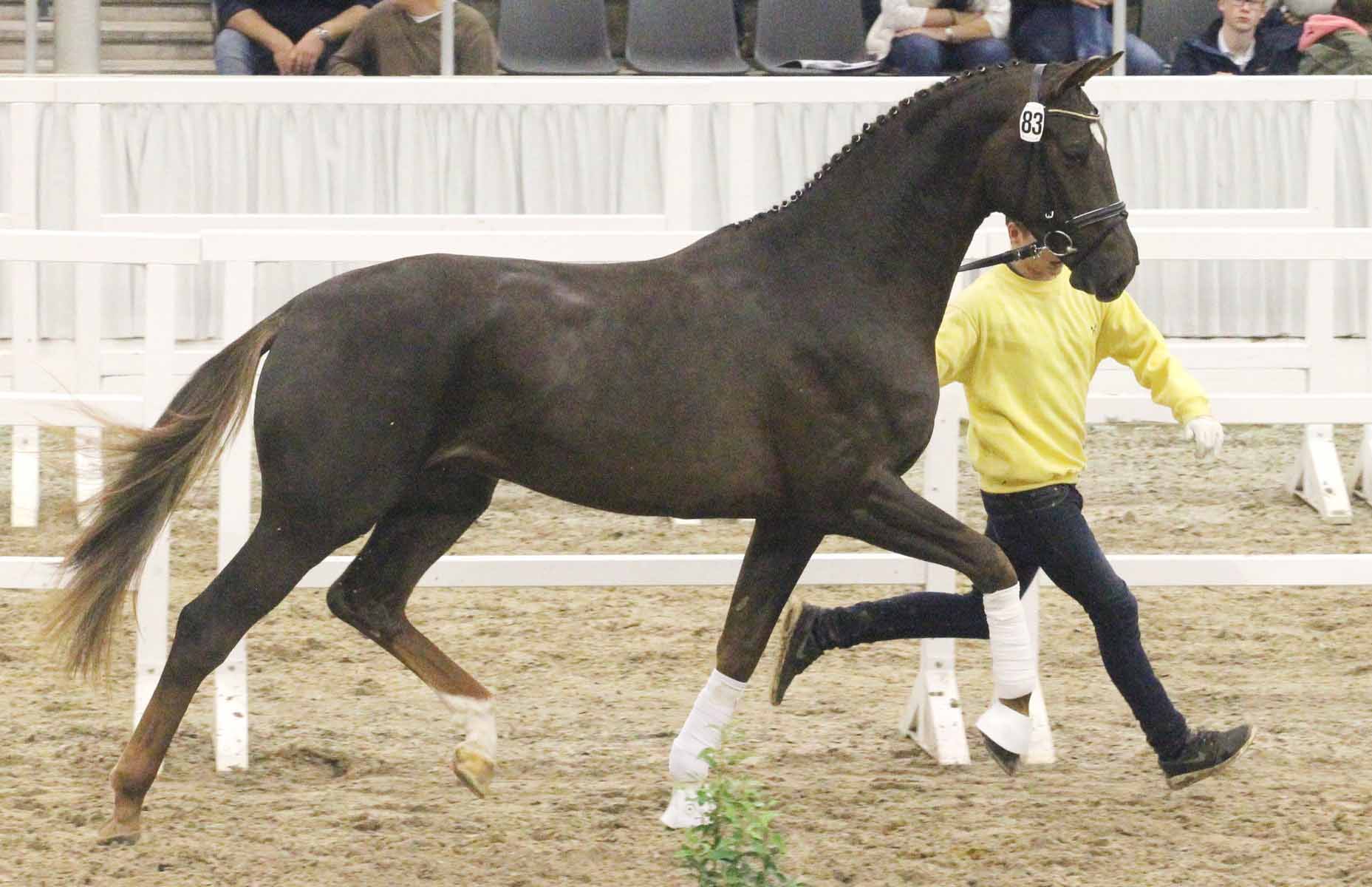 Today four of our stallions went to the 35-day test in Tørring, where the registration took place.

At the registration the horses were presented on solid ground, after which they were shown under rider. The next days the horses are going to be tested, and we look forward to receive the results.

The four stallions, that are going to be tested at the 35-day test are Baron after Callaho's Benicio and damsire Sir Donnerhall, Falstaff after Ampere and damsire Stedinger, Freischütz after Foundation with damsire Del Martino as well as Revolution after Rocky Lee, and damsire Rouletto. Baron is for testing in dressage, while the other three stallions are for testing in both dressage and jumping. 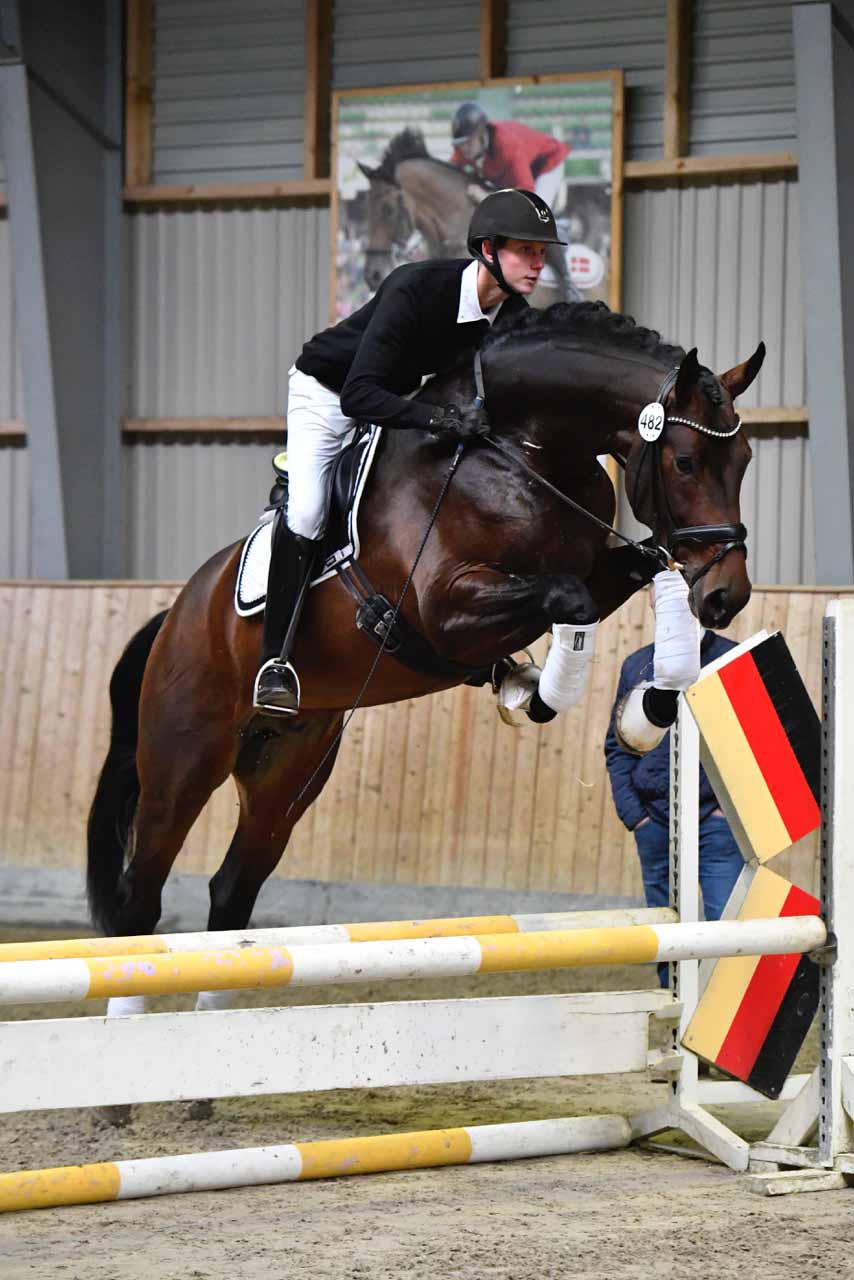