Westfalen Champion and Vice-Champion to Helgstrand 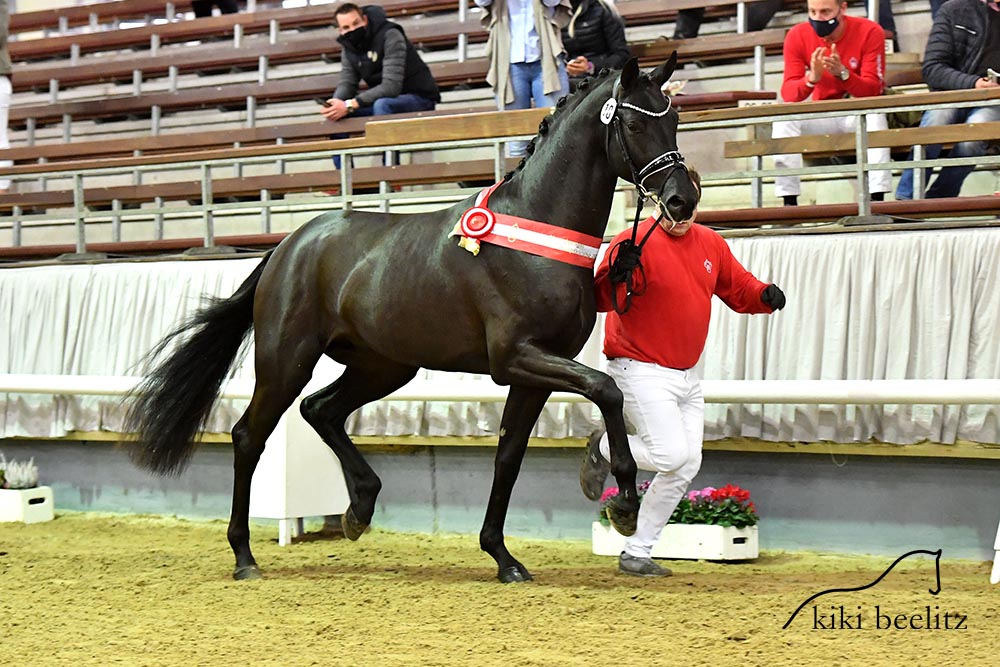 Picture: The Champion Stallion of the 2020 Westfalen Stallion Licensing by Fair Game/Destano - acquired by Helgstrand for 800,000 euros.

At the 2020 Westfalen Stallion Auction, Helgstrand was able to acquire the new Westfalen Champion Stallion by Fair Game/Destano and the Vice-Champion, which is by Diamond Deluxe/Lissaro. In addition the licensed stallion by Farrell/Lord Loxley. In other words, the two best stallions of the auction will next year be part of the impressive Helgstrand-Schockemöhle stallion collection.

- The Champion Stallion is very impressive - he is modern and beautiful and shows amazing gaits. He has no weaknesses, which the breeding commission also placed a lot of emphasis on. He is from an interesting pedigree, which will bring new bloodlines to the breeding world we know today - and at the same time we can tell that he will fit well with a large number of mares, Andreas says.

- The Vice-Champion possesses almost the same qualities as the Champion Stallion. He shows three superb gaits with absolutely extraordinary hind-leg action. Again, we are dealing with a state-of-the-art sports horse with an extremely exciting pedigree. I am sure that the breeders will welcome the two new dressage stars as part of the 2021 Helgstrand-Schockemöhle stallion collection, Andreas adds.

The Champion Stallion by Fair Game/Destano/Harvard is bred by Konrad Mensch, Germany and was acquired for 800,000 euros, while the Vice-Champion by Diamond Deluxe/Lissaro/Labrador and bred by Wilhelm Rüscher-Konermann , Germany, was bought for 600,000 euros. The stallion by Farrell/Lord Loxley/Damon Hill is bred by Karl-August Schulte-Varendorff, Germany, and was acquired for 250,000 euros.

For the 2020 Westfalen Stallion Licensing, Helgstrand also brought the young talented Floriscount/San Amour I, who even took the title as Premium Stallion. This amazing stallion is bred by Gestüt Elstertal, Germany.

Video of the Champion Stallion by Fair Game/Destano

Video of the Vice-Champion by Diamond Deluxe/Lissaro