When horses leave an everlasting impression 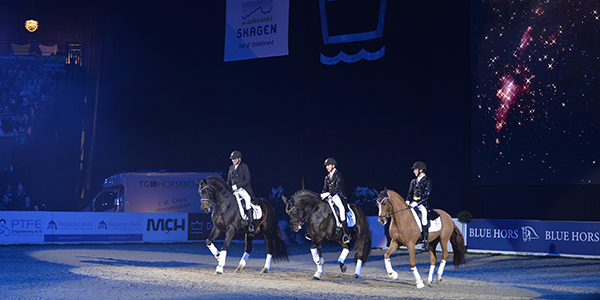 Picture: Ulf, Alexander and Andreas Helgstrand from the 2019 Gala Show in Herning

As some might have heard, a very special horse has left Helgstrand Dressage – a horse that not only has drawn attention to himself on the national and international showgrounds but also a horse who has been a goofy movie star on the social media accounts of Helgstrand. Obviously it is the 8-year-old stallion Ferrari OLD by Foundation/Hotline, who can look forward to an exciting future in the home of one of Germany’s leading dressage stables: Gestüt Ammerland.

- Not only will my groom Mikkala, who has been responsible for Ferrari during his time at Helgstrand, miss him, I certainly will as well. Every horse has its own personality, but Ferrari’s is just unique. He was the Labrador of the stable and with his funny acts he could bring out a smile of everybody, Andreas tells.

Many might remember when Andreas achieved a silver medal for the 5-year-olds at the World Championships for Young Horses in Ermelo in 2017 – or when he received the bronze medal at the Danish Championships for young horses the same year. The powerful horse makes a huge impression when being in the arena. Not only is he burly and big but he also has some exceptional gaits and is well known for his rideability. The apple does not fall far from the tree, as his father Foundation also has had impressive success on international Grand Prix level with Matthias Alexander Rath in the saddle. And as an 8-year-old Ferrari did his first Grand Prix at a national show where he invincibly took the victory.

- It was a day of sorrow when we had to say goodbye to Ferrari, cause he has been a real pleasure riding. He has been a part of Helgstrand for several years and I have had so many great experiences with this horse. When they stay around for so long, it is impossible not to become very attached to each other, Andreas says and adds: It is not many 8-year-olds, who you can enter a Grand Prix on with such great success. He has got the talent and the drive, and therefore I am also thrilled that Rudi Widmann from Gestüt Ammerland is taking over the reins.

Ferrari attended the gala show at the Stallion Selection in Herning, where he was a part of the remarkable show where three generations of Helgstrand were represented. This show was afterwards reputed as one of the highlights.

- The most memorable experience, might be the gala show in Herning last year, where my father Ulf rode him. It was an incredible experience entering Boxen with full stands, with my father and my son by my side. It was really overwhelming… Three generations in line – I guess it is only a handful, who have tried this. And here Ferrari also showed off his qualities – he didn’t strike one wrong move and did everything he could to keep my father safe in the saddle. Certainly, a memory that is imprinted in my memory, Andreas concludes.

Ferrari OLD has already moved to his new home, Gestüt Ammerland by Dietrich von Boetticher, placed a little south of Munich. Here the experienced Grand Prix rider, Rudi Widmann, will take over the training of Ferrari.