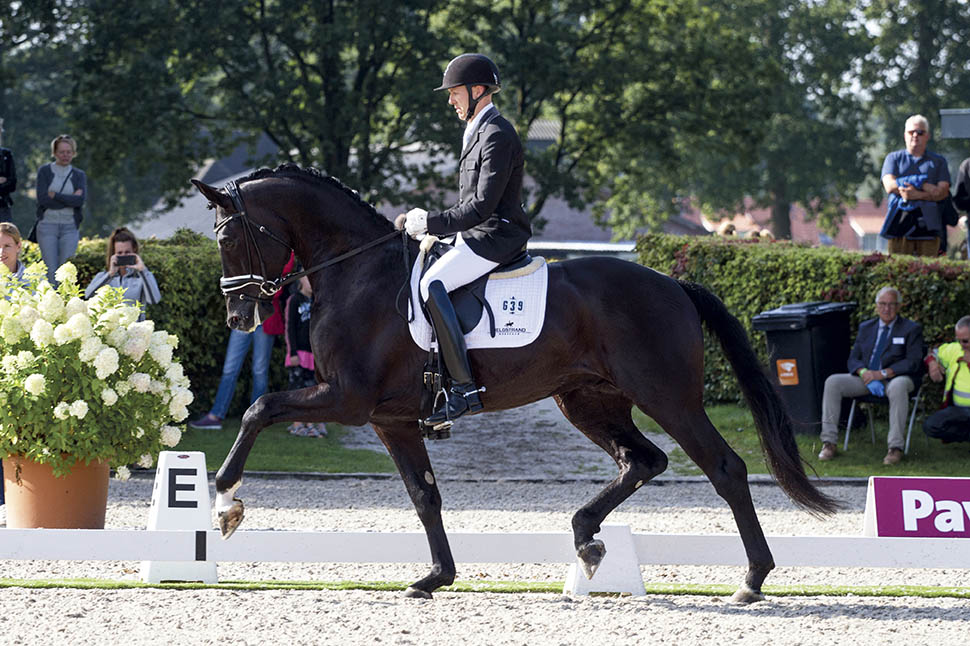 The news spread like ripples in the water when Helgstrand announced the addition of another stallion with the famous Gelder-blood to the collection. A stallion who, despite his very short time in Denmark, has drawn a lot of attention to himself by winning the qualification for the young horse championship and later on the finale with Helgstrand rider Thomas Sigtenbjerggaard in the saddle. Now the stallion can look forward to a new future in Prague, Czech Republic in the stables of Dressage Mala Skala, where the purpose is to focus on his future career as a dressage horse.

Kardieno (Dante Weltino/Parcival) definitely impressed with his outstanding balance, action and suppleness, resulting in grades far above average for his gaits and perspective. Especially in the final of the young horse championship he showed a lot of potential and could obtain the prize as the best 4-year-old.

- It has been a real pleasure riding Kardieno. Some were probably a bit skeptical when we introduced him as a part of our stallion collection, but he quickly turned out to be a stallion with very appealing qualities, that could add a lot of value to the breeders. We are looking forward to seeing him on his future journey, as we believe that he has the potential to join the top league of dressage, Thomas Sigtenbjerggaard says.

Kardieno is by Dante Weltino, who qualified to the prestigious Bundeschampionate as both a 5-year-old and a 6-year-old with Therese Nilshagen in the saddle. Already as a 7-year-old Dante Weltino had his debut in S level dressage and won his first Grand Prix as an 8-year-old. Since then, the couple has achieved many victories and placements of international Grand Prix level – and among the highlights, it is worth mentioning team bronze at the Europeans in Göteborg, Sweden in 2017 and an Olympics qualification. The dam sire is the Gelder-stallion, Parcival, who also competed at top dressage level.

As Dressage Mala Skala will focus on Kardieno’s future career as a dressage horse, he is unfortunately not available for breeding anymore.