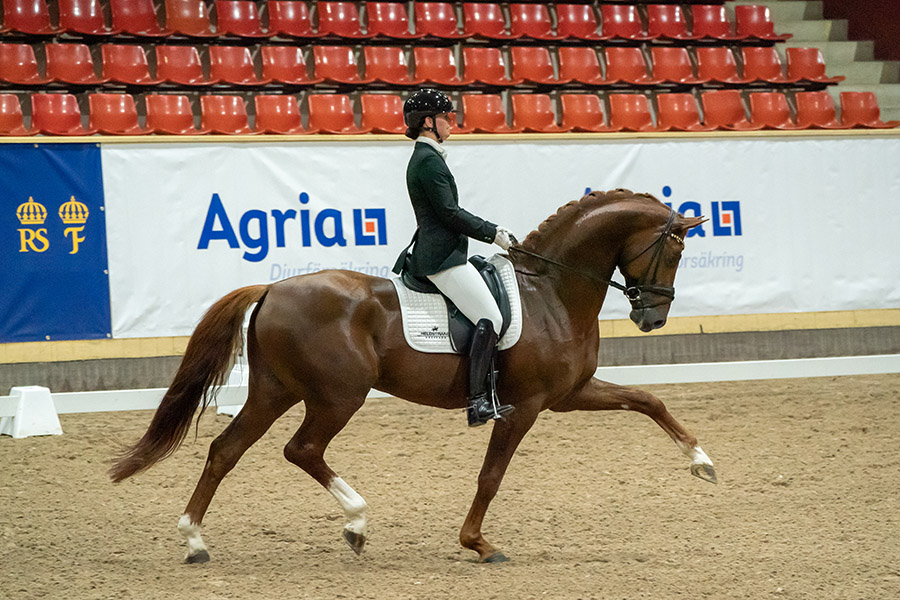 The riding sports centre Flyinge in Sweden these days the host of the Swedish championship for young horses. A horse that has attended all years is the now 6-year old Swedish-born Springbank II VH by Skovens Rafael/De Niro. Aged 3 and 4 he brilliantly took the victory, even impressing the test rider, Charlotte Dujardin, so much that she felt like giving the stallion grades above the scale. “He is the best 4-year old I’ve ever sat on”. Springbank continued his stream of victories this year and won the preliminary round with 95.2 points as well as the final with impressive 96.6 points, thereby seizing the title as the winner of Breeders Trophy for the third time. This time with Betina Jæger in the saddle.

Springbank had a significant lead as a result of the preliminary round resulting in sky-high expectations to the stunning stallion for the final round. As usual, Springbank didn’t disappoint and showed us once again, with his 96.6 points, that he is among the elite of Swedish bred horses. Springbank achieved the following points:

Watch the test from the finals here

“Springbank was with me the through the whole ride and the result of the day completely illustrates the feeling I sat with. He didn’t make any wrong moves and was very attentive towards all my signals”. We couldn’t bother giving it a little extra, which luckily paid off. He is the absolute best!” Betina Jæger proudly states.

Springbank brilliantly won the Breeders Trophy as a 3-year old as well as when he was 4 with the previous Helgstrand-rider Severo Jurado Lopez and attended as well the Danish championships in 2019 with Severo. Same year, he achieved an impressive 5th place at the prestigious World Championships for Young Horses in Ermelo.

The breeder of Springbank is the Swede Tobias Hansson, who runs the stud Västra Hoby Stuteri AB. Tobias is one of Sweden’s leading breeders and has throughout the years had a close collaboration with Helgstrand Dressage, where several horses are in joint ownership. Tobias is not only known for his outstanding breeding but is also servicing the Swedish breeders when they seek to buy semen of Helgstrand horses. Springbank is jointly owned by Tobias Hansson, Tina Hennix and Helgstrand Dressage.