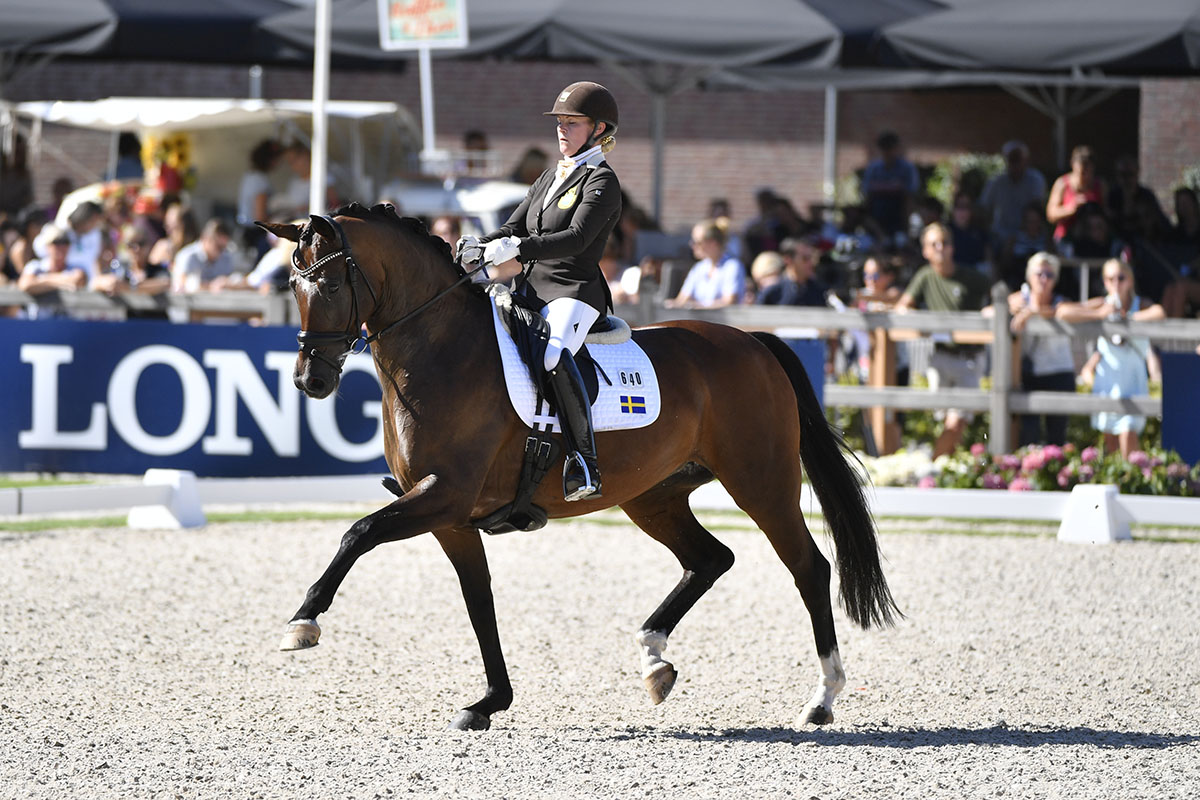 Picture: Jeanna Högberg and Astoria at the 2018 World Breeding Dressage Championships for Young Horses in Ermelo.

Even though these last few months have not seemed busy, Helgstrand once again has used the time to its fullest. It is not long ago that Helgstrand could add professional rider Michael Grønne and now the team of riders is expanded again with yet another very strong GP rider, the Swedish national team rider Jeanna Högberg who has a very impressive resume with numerous victories in both World Championship for Young Horses and international top-level dressage.

- It is no secret that I have for some time now, asked Jeanna if she would consider working for Helgstrand. She has a lot of experience with educating horses at all levels. And she has for several years now, been self-employed, which tells me that she really has the motivation and ambitions and knows the ways in having a company such as Helgstrand. I feel that she is a perfect match both in competence and personal and I am very proud that she has finally said yes to work for Helgstrand, Andreas Helgstrand tells.

Jeanna Högberg has won almost everything worth winning. She already made a very positive impression when she was a pony rider by winning two gold medals at the Swedish Championships and team bronze and the European Championships. She has since then won numerous medals such as three gold medals at the Swedish Championships, been a finalist several times at the prestigious World Championships for Young Horses, and also here won a silver medal. She was part of the winning Nations Cup team in Falsterbo and Uggerhalne in 2018. She has won Breeders Trophy no less than 7 times where five of them were with Springbank VH (brother to the breeding stallion Springbank II VH) and is now on the Swedish national team. Other than this Jeanna has educated a large number of GP horses with great success and has filled the shelves with trophies. She is popular in the equestrian world and have several times been nominated to ‘Tomorrows Winner’ by the Swedish Equestrian Federation and has been nominated to ‘Talent of the Year’ by Tidningen Ridesport, which shows her ambition to be among the best riders in the world.

Jeanna has chosen to follow her dream and luckily, she has a supportive family that moves with her from Sweden.

- I have great respect for this decision. It is a very difficult decision to move your whole family – I know this from my own time in Norway. I feel that Jeanna really wants this opportunity and that I am very proud of because she has what it takes to be the next top rider at Helgstrand, Andreas adds.

- I look very much forward to start the work at Helgstrand and with this, start a new chapter in my life. Luckily, I have my family standing behind this decision and we hope that we will thrive here in Denmark. I have never felt better than just now as a self-employee with fantastic horse owners, co-owners, and students, but sometimes you have to take great chances to go even further. It is my ambition to become even better, that has led me to say yes to this fantastic opportunity from Andreas. I look very much forward to be a part of such a large and successful team, develop as a rider and educate some of the best horses in the world, Jeanna Högberg tells.

Jeanna starts at Helgstrand Dressage the 1st of August 2020.