Another great weekend with lots of gold medals

It’s been a busy weekend for Helgstrand Dressage, who’s had several riders and horses at competitions and the Danish Warmblood Elite Foal Show. Amongst the riders was Alexander Helgstrand with Grevens Sa’Va, who’s been competing at the Danish Championships for junior riders, where they delivered one winning round after the other.

Last Friday, the junior riders started the first round of this year’s Danish Championships. Alexander and Sa’Va had a convincing program, which was rewarded by the judges with a total score of 76,054%. The equipage won the class with almost 3%.

On Saturday, in the second part of the competition, Alexander and Sa’Va also had a great ride. They received a total score of 76,605% and won the test.

On Sunday, Alexander and Sa’Va excelled in the freestyle. The equipage showed a top-level ride, which was rewarded by the judges with a total score of 80,600%. With no one to match this top score, Alexander and Sa’Va won the title as Danish Champions for Junior riders and ended another weekend with 3 winning rounds.

At the competition was Marianne Helgstrand with Super Mario. The equipage won their test on Friday, where they received a total score of 71,930% in the Intermediate II. 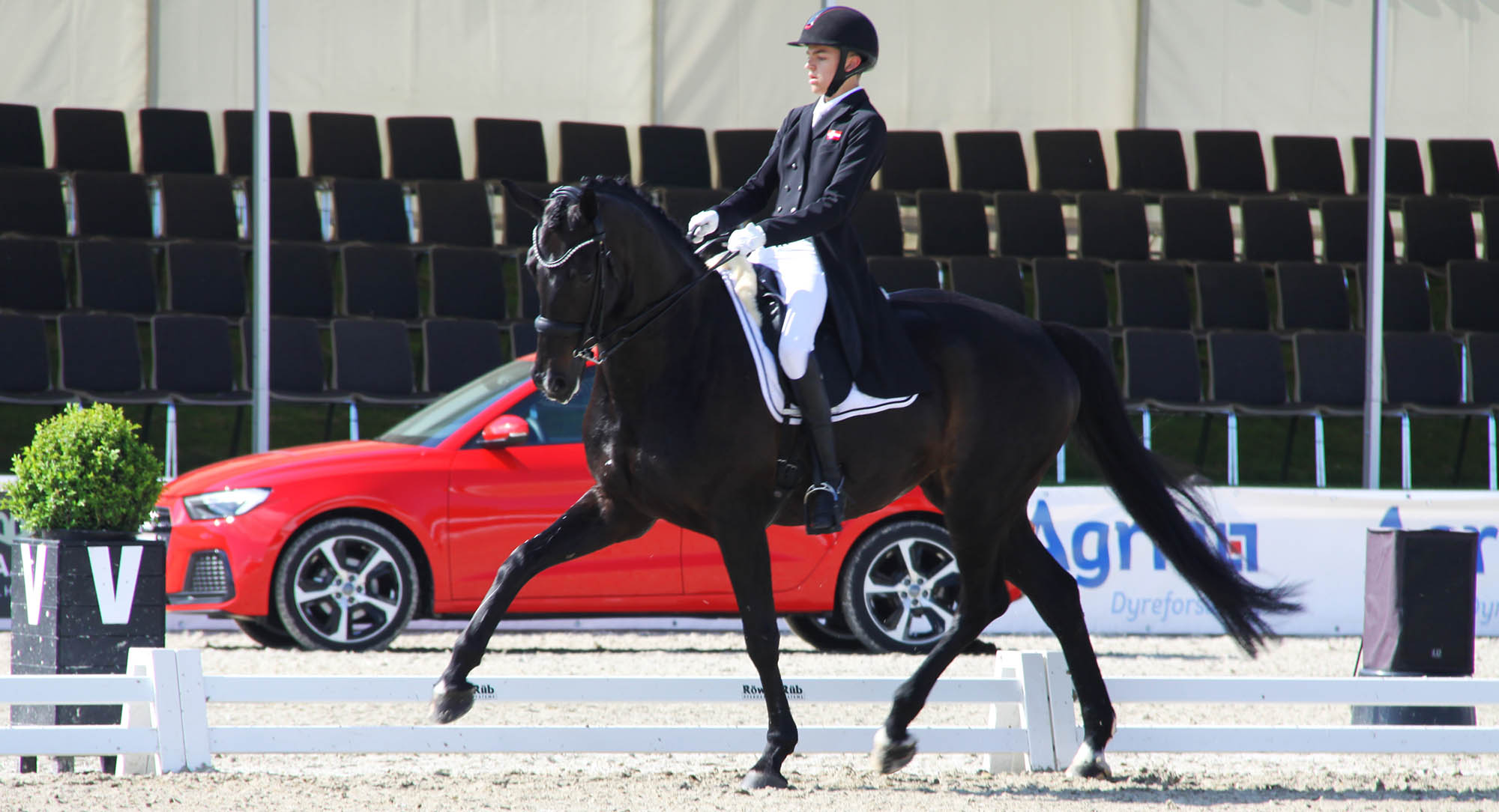 At this weekend’s national competition at Vilhelmsborg, many of our riders have had great results. The DEF championships tests for 4-, 5-, and 6-year-olds, was dominated by the horses from Helgstrand who danced their way to the top in all of the tests.

On Saturday the 4yo test was won by Anne-Mette Strandby Hansen and the stallion, Ferdades, where they received a total score of 87,600%. They got the characters 8.5 for walk, 7.9 for trot, 9.6 for canter, 9.0 for submission, and 8.8 for perspective.

On Sunday, the horses from Helgstrand dominated the top-3 in the test for 5yo. Severo Jurado Lopez and the stallion Springbank II VH were superior and won the test with an impressive score of 95,400%. They got the characters 9.0 for walk, 9.4 for trot, 9.7 for canter, 9.8 for submission, and 9.8 for perspective.

The 3rd place also went to Anne-Marie Hosbond, but this time with the black stallion, Janeiro Platinum. They got the characters 8.5 for walk, 9.0 for trot, 9.0 for canter, 9.5 for submission, and 9.2 for perspective.

The weekend’s remaining classes also turned out great for Helgstrand’s equestrians. Saturday, Betina Jæger and Chicago was places 3rd in the Intermediare II and got a total score of 70.219%. In the same test, Thomas Sigtenbjerggard and Scout S was placed 4th with a total score of 70.044%.

Sunday, Thomas Sigtenbjerregaard and Scout S finished in 2nd place in the Grand Prix and got a total score of 70.2167%.

This weekend, many offspring by Helgstrand stallions won medals and new titles at the Danish Warmblood Elite Foal Show.

In the final for 2-year-old mares, Fransisca by Franklin/Romanov won the title as the best mare. Fransisca is bred by Henrik Hansen and is also a half-sister to the two world-famous mares, Fiontini and Fiontina.

In the final for 3-year-old and older mares, two mares by Helgstrand stallions was licensed as gold medal mares. The first one was Fransisca Lightfood by Franklin/Michellino bred by Anette Lyngs and Torben Damsbo, and the second gold medal mare was Feine Galicia V by Kastel’s Grand Galaxy Win/Gribaldi bred by Iben Leere Kamp.

On Saturday night, the Danish Warmblood held an Elite Foal Auction where many of the participating foals were by Helgstrand Dressage’s stallions. The evening’s highest winning bid went to the filly Borbjergs Fairy by Knock-Out/Romanov bred by Jørn Frandsen Dahl. The filly was sold for 50.000 euro to Helgstrand Dressage.