Triple gold for Alexander Helgstrand and Adriano at the European Championship

With 3 amazing rides, young Alexander Helgstrand and his pony, Adriano B, won 3 gold medals at this year’s European Championships in dressage for ponies in Poland. The equipage delivered a hat trick, which must be the perfect end of Alexander's years as a pony-rider.

Last Wednesday, the team competition started early, and Denmark was placed second, after the team’s first two riders. Therefore, it was incredibly exciting and nerve-racking when the last to riders entered the arena last Thursday. After the team’s third rider it was made clear, that it would be Alexander’s ride which would determine if the team would win the gold, silver or bronze. Alexander was able to stay completely cool. Alexander and Adriano delivered an amazing performance, which was rewarded with a total score of 77,543%. Thereby, they secured the gold medal at the European Championships for the Danish team, for the first time in 33 years.

Last Friday, the individual classes started, and Alexander was amongst some of the first riders. Once again, the equipage had a great ride, which was rewarded with 78,216% and placed them at the top of the class. Saturday, the second half of the class took place, where the equipage managed to keep the lead. Thereby, the second gold medal at this year’s European championship was secured.

Sunday was the final day of the competition and only the 18 best equipages from the previous round were qualified. Alexander and Adriano danced their way through the program and exceeded the magical 80% when they got a final score of 82,140%. Thereby they wrote history for Danish riding, as the first equipage to have won 3 gold medals at the European championships in dressage for ponies.

Even though it was Alexander’s last big competition for ponies, it doesn’t mean that the young talent is done with riding. He has already started a couple of competitions for the Danish junior equestrian team with the horse, Grevens Sa’Va, with whom he won gold at the Nordic Championships for both team and individually in July. 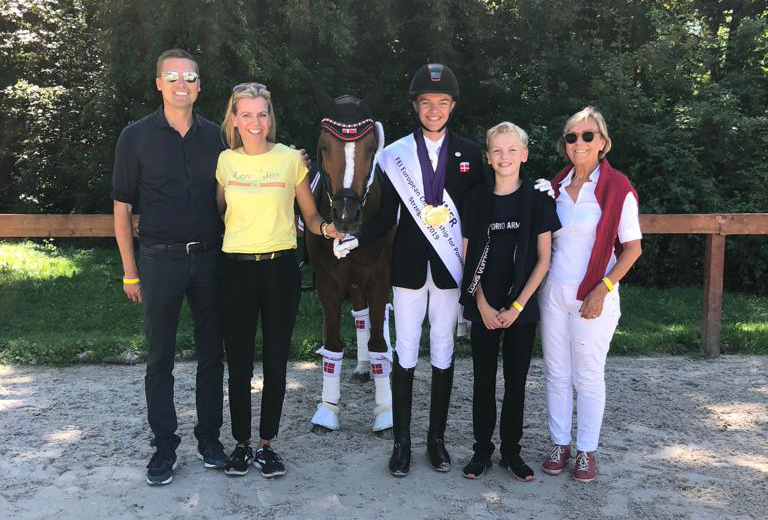