Teaming up with the world’s best

In the pursuit of being the world’s leading company in the equestrian industry, Helgstrand Dressage continuously establishes collaborations with some of the world’s best riders and trainers. The purpose of the partnerships is not only the development of horses but also for seizing the opportunity to address new markets of the home country of the new partner. 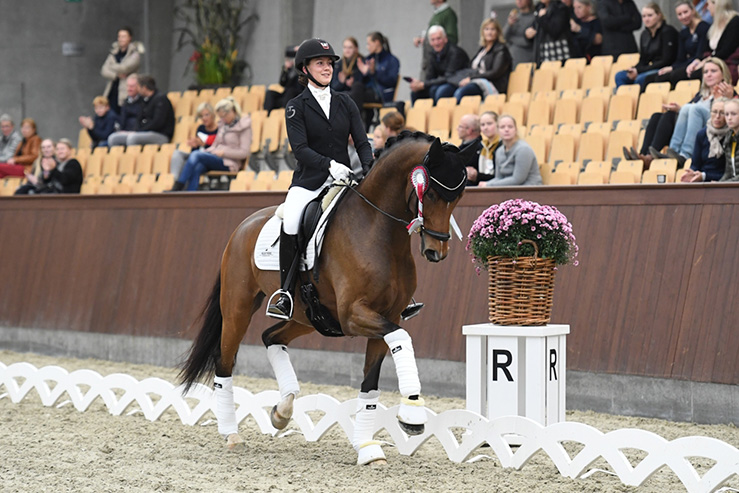 Picture: Cathrine Dufour and Eternity by Escolar/Sir Donnerhall I from the 2019 Danish Championships.

Collaboration with the best dressage rider in Denmark, Cathrine Dufour

It is no surprise, that Cathrine Dufour was on the top of the wish list when it comes to new business partners in Denmark. Cathrine has succeeded in making herself very well-known in the international dressage league as she several times has fought the world’s best riders to the last. At the prestigious SAAB Top 10 – a competition only for world ranking’s 10 best riders – she managed to make her best ride of 2019, and with a score of almost 90% in the freestyle, she won the competition, even outperforming Isabell Werth. This day, there was a new danish record and Cathrine officially became a part of the small crowd that has ever managed to reach such impressively high notes.

As the partnership was initiated in 2018, Cathrine expressed:

- I am incredibly proud that I get such an opportunity. Through many years, I have been in dialogue with Andreas. Getting the opportunity to train some of the world’s best horses is an honour to me, and I’m absolutely thrilled about this collaboration, Cathrine tells.

Cathrine has numerous medals from Danish, Nordic and European championships, several Grand Prix victories and with a world ranking as number 5 with Atterupgaards Cassidy, she is indeed among the world elite. Already aged 24, Cathrine attended her first Olympics with Cassidy, where she managed to be the best Dane with an overall individual rank as number 13. Her big goal is to win a gold medal at the Olympics – she is working every day determinedly towards this.

- We are delighted that Cathrine has agreed to commence a partnership with us. She has managed to develop young horses to Grand Prix level and the number of victories speaks for itself. She holds an incredible work ethic and is very well- disciplined – certainly, this is the reason for already having had such success compared to others of her age, Andreas tells.

Cathrine has already had several of victories and placements on the horses that she is training for us – for example, she reached a 4th place with Straight Horse Don Zuan (Zack/ Don Schufro) with the score 92,0% in the young horse championship for 5 year-olds while she managed to qualify for the 6-year-old championship with the score 93,0% in 2020. In 2019 she was placed 6th in the 5-year-old championship with Eternity (Escolar/ Sir Donnerhall I), while she won the MB0 with 81,41% in Ringsted Sports Rideklub in 2020.

Cathrine is based in Roskilde, in the middle part of Sealand on Grønagergård, which now acts as a sales stable for Helgstrand Dressage. 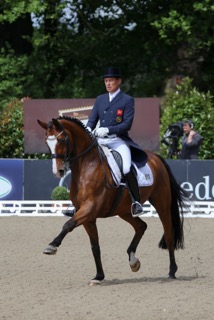 Helgstrand in collaboration with one of Great Britain’s top coaches, Emile Faurie

In 2020 Helgstrand could welcome one of the leading rider- and coaching profiles in Great Britain, Emile Faurie.

- Throughout the years, we have seen a bigger demand from the British market – this has now led to the establishment of a partnership with one of Great Britain’s absolute best dressage riders. It is now a privilege to welcome Emile to our team, Andreas says – he is pleased that he can now offer this extra service for the British clients.

- Andreas’s talent for scouting and buying the absolute best horses is definitely something, that we can take advantage from in Great Britain, and it can add the quality that we demand. I experience great demand, and that way I am looking very much forward to this partnership. I decided to become a part of the Helgstrand team because of Andreas’ integrity and his endeavours in always trying to make the best match between horse and rider, Emile stated.

Emile Faurie’s team has already had great success on the show grounds, where the 6-year old Straight Horse De Milla has won her first M- class with a 76,6% score.

Emile Faurie is based at Heath Farm in Oxfordshire, that now has the function of a sales stable for Helgstrand Dressage. Heath Farm is only a one-hour drive from London, making it very convenient for the customers to get back and forth to the location.